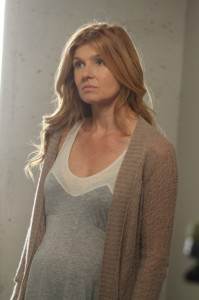 While I’ve had the feeling that another Harmon would bite the dust before the finale, the delivery of that foreshadowed doom was still a gut-wrenching experience. After that mind frak of a birthing scene, Vivien finally succumbed to the complications of her giving birth, which also took the life of Ben’s child, as well. Now Ben is truly “alone” in that God forsaken House and he still doesn’t have a clue about what’s going on around him. Now after losing his wife, Violet, and his son (technically) all in one day, you have to imagine just how long will it take before Ben completely checks out mentally, by either hurting someone or killing himself in the process.

But let’s put Ben on the back burner now and focus on the topic at hand, which is the death of Viven Harmon and the floodgate of possibilities that American Horror Story can take with this development. The way Connie Britton delivered Vivien’s final moments as a living person, you completely forget that she didn’t have much to do in terms of character development in this episode. Other than declaring how quickly she wanted to get as far away as possible from the House and later screaming bloody murder during child birth, Vivien only became the latest casualty of the House’s ultimate sinister plan that still has yet to become abundantly clear. Nonetheless, Vivien’s death still held the same powerful punch as Violet’s discovery of her own death did last week, showcasing that all bets are off going into the season finale. In short, this episode left me heartbroken, flabbergasted, and most of all, emotionally drained. The final scene with Violet and Vivien simply slayed me down to Violet’s last whimper before fading to black.

Now back to Ben, who is the surviving member of the Harmon family. I won’t even count the “Alpha” twin, who we discovered was pretty much a leech/cancer/vampire towards his normal brother in the womb, as being a member of the family since Tate is the father of the baby and not of this world. Will Ben bite the dust as well or will he stay to be with his family, and fight Constance on possession of the House?

Violet truly shined tonight and is it just me or did she look more vibrant and alive tonight than she ever did when was alive? Anyway, I digress. Taissa Farmiga did some serious ‘multitasking’ in this episode, giving us various shades of Violet all within the same damn scene. Characteristics are just dials on a dashboard for Farminga’s to access with ease. Thank God “death” isn’t the end for a character on this show, because American Horror Story without Taissa Farmiga is akin to Glee losing Lea Michele. It just wouldn’t feel right.

As for Violet herself, the conflicts she was given in this episode would have weakened the average person at the mere thought of trying to apprehend them. But Violet is not your average CW teen and faced each issue head on, even if it meant sacrificing her heart into the meat grinder to get the job done. As Violet pleaded for Vivien to cross over to “the Other Side,” my initial thoughts were of slight anger at Violet for even wanting Vivien to experience such hell of being a victim of the House’s twisted history. Then when Vivien appeared beside Violet after Tate was given his walking papers, it all made sense. Violet was only pleading for her mother to join her, because she didn’t want to face the House’s horror alone, which is highly understandable. 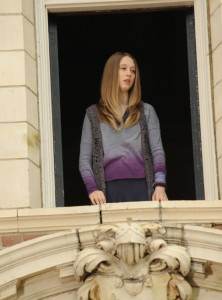 Despite “Birth” being the penultimate episode of the season, the final scene with Vivien and Violet would have been a perfect way to end the season and their story for the time being. With that said, I’m dying to find out what Ryan Murphy and Brad Falchuk has in store for these two in this week’s finale.

This guy is just hard to place when it comes to his ulterior motives. Plus, just how much has Tate known about the House and its plans for the Harmons? I felt Violet’s pain when she found out Tate was the one who raped Vivien, which coincidently lead to Vivien’s death and spirit being tethered to the House’s anvil of evil. From several standpoints, it would seem as if Violet was a pawn in an elaborate plan with Tate being the calculating puppet master behind it all.

With that said, Tate truly loves Violet and it’s this fact which makes it hard to label him a complete monster. At this point, Tate is American Horror Story‘s modern Dr. Jekyll/Mr. Hyde crossed with the angst and despair of a 90s teenager, with the nihilistic charm of a demented Bret Easton Ellis protagonist. In short, we can sympathize with Tate and his all-American looks, but only to a chilling point where the lines begin to blur. This episode of American Horror Story is a prime example of that.

Since we know that most of what Tate has said or claims to know has been fabricated to an extent, who is he truly working for? Constance? Nora? Himself? Or the House?

Constance and her quest to get rid of Chad and Patrick was freaking hilarious and if Jessica Lange and Zachary Quinto do not get any Emmy nods, I will be one highly pissed blogger.

Speaking of which, why was everyone so worried about Chad and Patrick getting the babies? Personally, I would have used my energy to try to evict Hayden from the House, which brings me back to Tate and just exactly how much did/does he know when it comes to his ghostly brethren. I’m sure he knew of Hayden’s plan to take Vivien’s babies and how her motives might be a bit more sinister than what Chad had in mind. So why not tell Violet? Was he just “protecting” her again?

The reveal of the Infantata was the scariest thing I’ve seen all season. It was as if the thing was on its way out my TV screen and into the depths of my soul. Still creeped out by it.

Billie Dean needs her own damn spinoff. That is all.

Well that’s all I have for this week. Sorry for the extremely late review, but life was not working for me at all these past few days. What do you guys think will happen in next week’s season finale of American Horror Story? Will Ben make it out alive? Will Hayden get the babies she thinks she deserves? Will Constance keep her “grandson?”