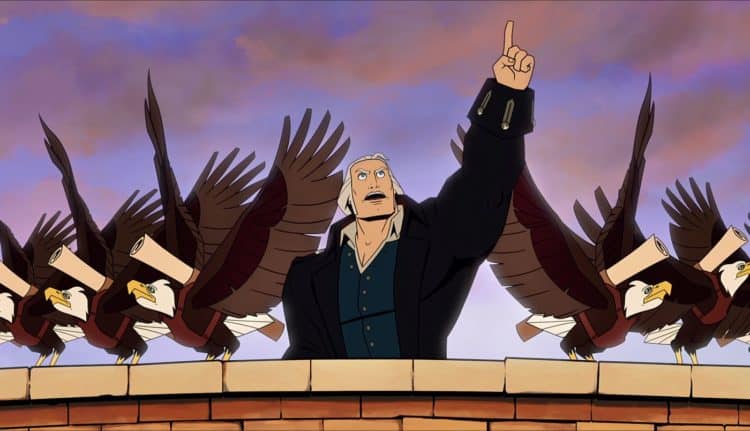 If you’re feeling patriotic on the fourth of July, check out America: The Motion Picture. If this animated flick doesn’t get you pumped, then I don’t know what will. Okay, maybe not, but I will say, don’t expect it to be educational or serious. You know who made this film? The same people who gave us Archer, Spider-Man: Into the Spider-Verse, The Expendables, and Magic Mike. Wow, that’s quite a lineup of creative talent. With guys like that helming this movie, you can really expect a crude fest. And to be completely honest, that’s exactly what this movie is. It’s the perfect animated science fiction parody-black comedy film that is very, very loosely based on the Founding Fathers and the American Revolution. Can you possibly get more American from this? Probably not, but if you have thick skin, you might not dig this.

Speaking of Magic Mike, guess who voices the main character, who is none other than George Washington? The one and only Channing Tatum. What’s funny is that I didn’t even recognize his voice at first, but when he goes nuts, I caught that Tatum voice. It makes me realize that Channing Tatum is a rather bankable comedy star and America: The Motion Picture puts him in the center stage. And of course, why wouldn’t you put George Washington as the main character? Channing Tatum voicing America’s first president is the first step for delivering a good black-comedy movie.

Oh, but it doesn’t stop there. America: The Motion Picture takes many steps away from what we’ve all read in the history books. The movie opens with Benedict Arnold already in the service of the British army and he slaughters some of the Founding Fathers right when they sign the Declaration of Independence. Luckily, George Washington wasn’t there, because he was partying and watching theater (the performers were based on the Blue Man group with a red and white painted members) with Abraham Lincoln. Benedict Arnold showed up, transformed into a werewolf, and bit a big chunk out of Abe Lincoln’s neck. This prompted George Washington to ignite a revolution and get his revenge on Benedict Arnold.

And yes, you read that last part right. Benedict Arnold, America’s most famous traitor, is an actual werewolf in America: The Motion Picture. How messed up is that? Very much so, but this animated America movie doesn’t hold back. Benedict Arnold being a werewolf is just a dip in the water for this movie, as this movie takes many trends and cues from the modern age. For instance, when George Washington begins recruiting for his revolution, the first man he goes to is the famous Founding Father Sam Adams. In America: The Motion Picture, Sam Adams is an obnoxious, foul-mouthed rebel rouser who runs his own fraternity. It makes sense, considering how we all associate him with the famous beer.

That’s pretty much why he joins the rebellion, because the British hate his beer. He’s also voiced by Jason Mantzoukas, and all I heard was Rex Splode from Invincible. You think that’s crazy? The next recruit was Paul Revere, and America: The Motion Picture portrayed him as a famous horse-racer who participated in illegal horse-racing. Think of it as The Fast and The Furious in the eighteenth century with all the hot women and bright lights attached to horses. They wanted Paul Revere because he’s the most famous “racist” in America. Get it? Because he races with horses? I must admit, that was pretty clever.

Speaking of other deviations from real history, America: The Motion Picture gives us a Chinese female version of Thomas Edison voiced by Olivia Munn. This Thomas Edison is a gifted scientist, which is widely frowned upon, and uses her knowledge and inventions to fight the British. Her signature weapons are two gloves that shoot out electricity. Seriously, this feels like the people behind this movie just started a Dungeons and Dragons game. Hey, who says you can’t be patriotic and creative all at once?

America: The Motion Picture spices up the diversity with Chief Geronimo (just Geronimo) and Blacksmith John Henry. Chief Geronimo is basically the adult in the room who is constantly annoyed with everyone’s ignorance towards the violence towards his people, while John Henry is tasked with forging the silver bullet that’s supposed to kill Benedict Arnold. These two historical figures love hanging out with each other and talk smack about the others in the group. And they do a lot of the smack-talking in strip clubs. Yes, there are eighteenth-century strip clubs in America: The Motion Picture. Talk about rewriting history.

Everything in America: The Motion Picture is over-the-top and exaggerated. That’s really why it’s hilarious and worth watching. This revolution group does all kinds of wacky things, including inadvertently sinking the Titanic, fight redcoats in a bar called Vietnam, and work with Clara Barton to create a robotic horse. Actually, they created a cyborg centaur merged with Paul Revere and his dead horse, Clyde. Need I say more?

There is a final battle in America: The Motion Picture that blends historical combat with fictional combat. That includes big elephants, giant robots, and George Washington duel-wielding gas-powered chainsaws on his wrists. George Washington even whips out an electric guitar and sings his own national anthem. This inspires many other Americans to rally to his side and actually start his revolution. Everything goes exactly how you expect it to from there. A lot of blood with modern automatic rifles, magic beans, and flying machines. There’s even a soccer ball that eats people. America: The Motion Picture doesn’t hold back or forget about the craziest trends in pop culture.

America: The Motion Picture is a good movie to watch if you’re tired of documentaries. If you don’t feel like being educated and just want to be entertained, give this movie a watch. It’s crude and unbelievably ridiculous, but it delivers. Honestly, that kind of humor is up my alley, so I enjoyed the heck out of it. What better way to celebrate the Fourth of July? Absolutely none.