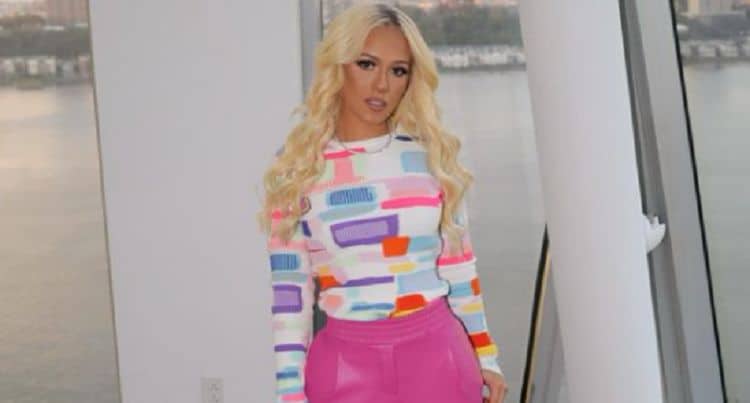 The world is obsessed with women athletes date and marry. Of course, these are women who are fascinating to so many because they are dealing with an entirely different realm of relationship issues. They are dating and/or married to men who are away from home often, who have long days of practice and endorsement deals, and they are men who have women throwing themselves all over them all the time without a single care or thought about the woman who he shares his life with. We aren’t saying that all athletes enjoy that or want that, but it’s just so prominent. When NBA star Derrick Rose became engaged to his lovely girlfriend, Alaina Anderson, everyone decided it was time to learn more about her.

Not only is she young, but she’s also a New Yorker. She’s been there for a while now. She’s worked hard to maintain a very cool life in the city, and that includes starting her own health and beauty company. She calls it KIC, which is an acronym for Keep it Cute.

She met her fiancé in 2016 when she was freshly into her 20s, and he already had a child from a previous relationship. As a result, Alaina became a stepmother. She’s not an official stepmother at the moment since they are not married – yet – but she’s been part of this child’s life for more than 5 years now. That makes her very much a mother figure to the child.

In addition to being an almost-official stepmother, Anderson is also a mother. She and her new fiancé share two children. They have a little boy and a little girl. Their daughter is Layla Malibu and their son is London Marley. They both share their father’s last name.

4. She Had a Cool Engagement

She and her fiancé got engaged in October 2021 at Madison Square Garden, and she is beyond happy. She cannot believe she had the fairytale night of her life, and she is so excited to plan their wedding and make their little family official. Derrick Rose is the one who made the official announcement online, and the world loves it.

5. They Were Rumored to Have Gotten Married Before

Back in 2018, the world began speculating that the couple was already married. The rumors started up saying that the young couple wed quietly in a small ceremony, but neither ever confirmed the rumors. They didn’t say anything about it either way, but a new engagement kind of makes those rumors seem untrue and obsolete.

6. Their Kids are Close in Age

She effectively spent two years of her life pregnant. Their daughter was born in March of 2018, and their son was born in May of 2019. She was around five months post-partum when they got pregnant with their second baby, and now they are taking care of two babies born only a year apart. It’s so much fun to have them close in age, though.

She was born on November 15, 1994. This means she’s turning 27 in 2021. She was in her mid-20s when she began having babies, but she’s been a business owner and an entrepreneur selling her athletic apparel and other items online for some time. She’s been hustling her entire life, and she’s succeeding.

She might live in The city, but she’s from another big city. She was born and raised in Chicago, so she’s something of a city girl at heart. She’s always been in a city. Her parents are Anthony and Angela, and alliteration is clearly a thing in their family when it pertains to names.

9. She Went to College

Following her high school graduation, she decided to begin her adult life as a college student. She attended classes at the University of Illinois, and she had a great time there. We don’t know what she studied or even if she finished, but she did go there.

We are not certain whether she is signed with a modeling agency, but we know she is an Instagram model. She posts beautiful photos to her Instagram feed, and she shows the world she clearly has some serious style. She’s a woman with a lot to offer, and she’s making her future brighter with each endeavor. She has a lot of followers, and her fans want to know as much as they can about her.