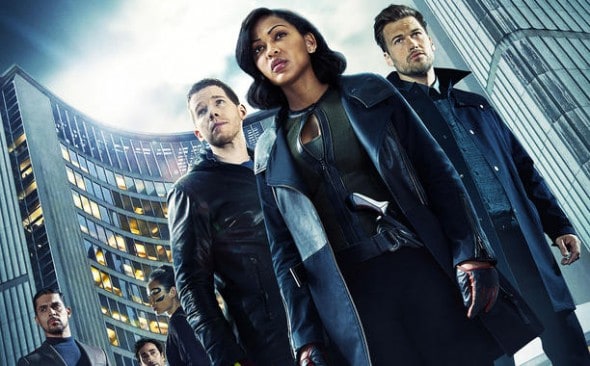 Before we can move forward into the future for a possible TV show reboot we need to look back at the Minority Report movie. Based on the reviews of the critics, the show’s failure that resulted in it lasting a paltry 10 episodes before its cancellation was that it was b-o-r-i-n-g. That is in stark contrast to the movie, which has much of its theatrical success (that continues today) based on being a fast paced, high action movie. Having action actor Tom Cruise as the lead only increased the chances of the success of the Minority Report movie.

The basic idea of the show, a combination of a dystopian and utopian world where crimes have been predicted before they happen, has been used several times since the 2002 release with varying degrees of success. But one of the biggest hidden reasons for its success is that it never tried to take itself too seriously. It was a combination of artificial intelligence, a futuristic world, and an array of action sequences that combined just the right amount of levity to be exciting and yet create a stress reducing movie going experience.

Of the Terminator series, Terminator 2 has been rated the most popular according to IMDB. The reason is that it has all the action necessary provided by Linda Hamilton contrasted with the robotic personality of Schwarzenegger. Anyone who has seen the movie knows that if it were just an out of control killing spree with the liquidation of two Terminator units at the end, it would easily be replaced as the most popular by T3.

The issue with a reboot

The problem for a television reboot is that Minority Report show would not have the luxury of being a 2 hour action fun fest. A lead actor with the combination of action hero and comedian would be in order, perhaps someone along the lines of Damon Wayans if he can be stolen from his current gig with Lethal Weapon. There doesn’t seem to be any shortage of B-level villains available, so they can be moved in and out of the show as needed.

As for the AI genre, “Person of Interest” had a successful 5 year run, and then there is “Almost Human” which seems to be a hybrid of the main theme of “Minority Report.” The public in general is either more intrigued or frightened about the potential for AI, so there is a huge potential audience for the show if it can manage to hold the interest of the current low attention span generation.

The danger, and one of the underlying reasons for the original show’s failure, is that it stood pat with the advantages it had with the original movie. We are talking about a decade and a half passing by since the movie’s release. A lot of things have changed in the world of technology. It may be hard to believe but the iPad would not come out until 8 years after the premiere of the movie. Upgrading the technology across the board is a must.

Television shows tend not to have the huge budgets that major motion pictures have, so the action scenes and CGI effects need to be well-planned and smart. People who will be drawn to the new show will have to have their intellects piqued and forced to choose between whether the AI or the villain is the true enemy. Man versus machine has been a popular theme for decades, and if you look back not too far at the surprise low budget British summer hit movie, “Ex Machina” you can see the possibilities of expanding the concept to Minority Report.

How can this work?

We can agree that there must be all the right pieces in place for a viable Minority Report show to be successful. We need a recognizable action lead actor who also has the right amount of levity so as not to take the show too seriously. Creative writing is a necessity, with the writers having the ability to completely understand what made the movie work and bring the best parts of that writing into the show. It is clear the mix of dystopian and utopian settings cannot be lost in translation. The trickiest part is to dodge the landmines that shows over the last decade have planted by successfully taking on the AI genre and finding a space for the original movie to grow in a small screen environment.

There are challenges if a new Minority Report will find its way back on television as a series that lasts longer than 10 episodes. The way this will happen is if writers and producers have learned from the successes of the past, not the failures.