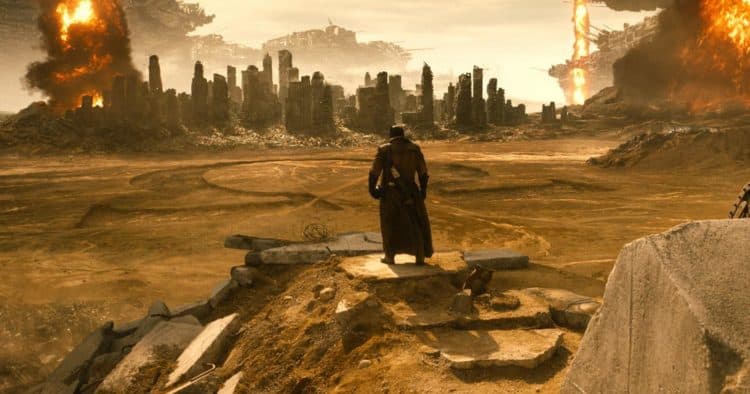 Point to one of the most coolest scenes from Batman vs. Superman: Dawn of Justice and I think most fans would pick the Knightmare scene. We had a no holds barred Batman who used all types of guns, could snap a grown man’s neck with minimal effort, and could take on multiple soldiers at once. He also led a resistance group fighting against a new Earth ravaged by Darkseid and his minions from Apokolips. Oh, and there was also the corrupted Superman who presumably ripped his heart out. That’s when Bruce Wayne woke up in the present and was visited by an erratic Flash. And then he woke up from that “dream” and decided that the best way to save humanity was to kill Superman. Doesn’t really sound like the Batman we all know and love, does it? No matter how brutal Batman was while fighting criminals, he vehemently stood by his code to never kill. So, in a daring move by Zack Snyder, the director decided to do the unthinkable and give us a Batman who didn’t mind taking lives. Yeah, it didn’t really sit well with many fans, but then again, it’s not like Batman hasn’t killed anyone before in the comics. I mean, did you guys play Arkham Knight? How many henchmen did you run over with the Batmobile going in full speed? Oh, but they didn’t die from the impact, they were just tasered, so they didn’t die. Let’s just be real here and admit we definitely killed people in that game.

That’s okay, but needless to say, fans were divided by the very violent Batman in Batman vs. Superman. No matter how you feel about Zack Snyder’s take on the Dark Knight, it’s pretty hard to deny how awesome that Knightmare scene was. The problem is, that scene raised a lot of questions and didn’t really lead to anything. It was certainly supposed to, but that was only if Zack Snyder was allowed to continue his plans for the Justice League movies. We all know how that story turned out, but at least he got to show us his actual vision last year. I doubt he’ll be able to continue what he had in mind, but we do know that the Knightmare scene was originally meant to lead to something huge. Based on the leaks that were released about Zack Snyder’s Justice League sequels, Darkseid did succeed in his invasion of Earth and even killed Lois Lane. This allowed him to manipulate Superman into becoming his top enforcer, hence the corrupted Superman in the Knightmare scene.

We actually got to see the Knightmare scene expanded on in Zack Snyder’s Justice League. It was a scene in the end that showed us the early stages of Darkseid’s invasion. The dark lord of Apokolips managed to kill both Wonder Woman and Aquaman, taking two founding members of the Justice League off the board. We then got our brief glimpse of him killing Lois Lane and the beginning of his corruption of Superman. That was some heavy stuff to take in, but the real highlight was seeing Batman lead his insurgency. It turns out, the small group of ordinary rebels he was leading in the Knightmare scene weren’t the only ones fighting with him. He actually had his own small team of heroes, along with some villains fighting alongside him. The team we saw in this expanded Knightmare scene consisted of the Flash, Cyborg, Mera, Deathstroke, the Dark Knight himself, and even his archenemy, the Joker. That was such an eye-popping surprise, not to mention Jared Leto finally got the chance to show us he can be a good Joker. The scene ended when the team was ambushed by the corrupted Superman, leaving their fates uncertain.

As of now, that was the end of the whole Knightmare storyline. Or is it? Based on an article from Inverse, some curious reports from Reddit claim that Zack Snyder is developing a Knightmare series. Whoa, now that is some interesting news. I would definitely take these claims with a big grain of salt, given that Reddit is a place of hit-and-miss rumors. However, I believe this is one rumor worth talking about because I personally like the idea. If you are a fan of the Snyderverse, then this could be the closest thing we could be getting to a continuation of his storyline. No sequels to Justice League? That’s fine. We’ll take that Knightmare series if Zack Snyder can finish showing us his original vision. Let’s just take a minute and think about what kinds of things we could see in a Knightmare series. Through dialogue in the Knightmare scene in Zack Snyder’s Justice League, we know that some particular and major DC characters perished. One of those characters is Harley Quinn, who made Batman promise that he would kill the Joker. That one scene of Batman and Joker interacting perfectly summed up the relationship between the two hated enemies.

If you’re a Batman fan, you’ve seen it many times before. Joker taunts Batman with some very personal insults, Batman gets very tempted to kill him, but he still decides to pull himself back. This time, however, Batman seemed very genuine in his threat to kill the Joker and the Joker himself actually believed it. After a brief moment of comprehending Batman’s threat and feeling a fraction of fear, the Joker stayed true to his nature and found the dark humor in the threat. It’s clear that Batman is only working with the Joker because he needs him, so why not show us the reasons behind their contentious partnership? Now this is where a Knightmare series can really shine. But if this idea does happen, it shouldn’t stop there. A Knightmare series needs to go all out and show us the true extent of Darkseid’s invasion of Earth. I have a feeling more major DC characters survived the invasion and these characters either joined Darkseid in ruling a ravaged Earth or they decided to fight with Batman’s resistance. The fun part would be seeing which characters would be on which side.

It sounds obvious that the villains would join Darkseid, but if Deathstroke and even the Joker are fighting with Batman, you know other villains wouldn’t be too happy living under Darkseid’s rule. And likewise, most of Earth’s heroes would likely join Batman’s cause, but many others could suffer the same fate as Superman and become twisted minions of Darkseid. Seeing Batman’s team fight these twisted heroes and villains would be the Knightmare series at its most entertaining moments. As far as ending the story Zack Snyder had in mind of for Justice League, I guarantee you it didn’t end with the Knightmare storyline. What are your thoughts on these supposed leaks, DC fans? Again, take it with a grain of salt, but a Knightmare series just sounds too cool to pass up. Heck, it could even be animated, so Zack Snyder could give us some violent action scenes. You know, even more so than what we got in Batman vs. Superman. That was some brutal stuff, but I think Zack Snyder can top that with a Knightmare series. With the multiverse coming to the DCEU, what’s the harm in showing us how things played out in the original timeline?