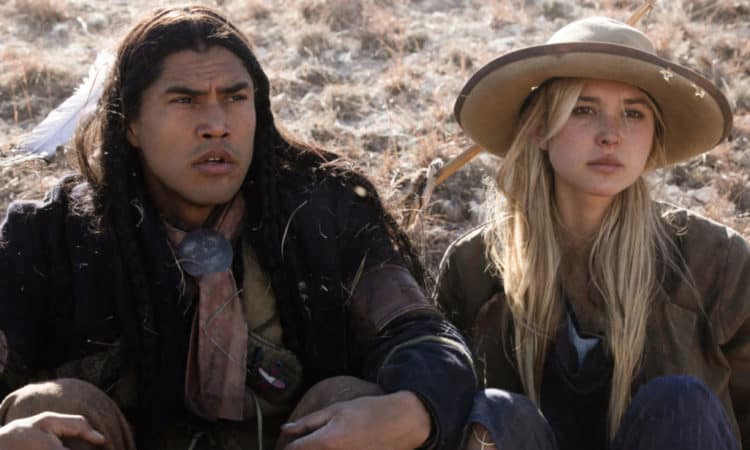 Disaster continues to heap itself upon the wagon train as the Duttons and the settlers find themselves subjected to one thing after another on the open prairie, and are forced to weather every step of it as the harsh, unforgiving landscape continues to test them. There’s no doubt that some are close to breaking as several of the settlers are looking rough and perhaps ready to break. As the group makes their way into Comanche land, however, the necessity of paying a tax while passing through is a great deal better than paying the toll that might occur if they did nothing to placate their hosts. It’s evident that the settlers still don’t have a grip on what it means to travel through the lands of others however since their inability to understand, initially, why the two Comanche representatives eat before they do is quickly explained by Shea, who has no intention of passing through Comanche territory without being hospitable. When it comes to the rules governing food and its distribution, however, Cookie is given a quick lesson about table manners when Margaret physically reprimands him for dropping multiple f-bombs in front of her son.

That might have created a moment of levity within the show, but it was short-lived since not long after this one of the more dangerous parts of being on open ground came to pass as a tornado came a-calling, decimating several wagons and forcing the group to scatter as Elsa, the younger Comanche known as Sam, Wade, and their new hand Colton are separated from the rest of the group as they take shelter until the storm burns itself out. Elsa’s initial attraction to Sam, which is shared by the indigenous man, is initially sparked by a race between the two that Elsa wins as her horse easily outpaces Sam’s. But it nearly culminates during the storm as the two are huddled together, and Elsa takes that time to let go of her more animal passions as she kisses Sam as they ride out the storm.

The connection between them is hard to miss as Sam reveals that his wife was killed, and he, in turn, killed the man responsible, taking his name soon after. Elsa reveals how she killed a man as well but didn’t know his name. The bond between the two isn’t too hard to understand as both of them still carry the pain of losing someone with them, and it shows. It’s fair to say that it might not work, but for the moment that is shown in the episode, it’s easy to think that the two are exactly what they each needed at that moment. As for the rest of the camp, it’s fair to say that it might be a miracle to see the lot of them reach Oregon without losing a few more people. In fact, it would be easy to think that none of them are ever going to see the westernmost states, if only because they aren’t toughening up in the manner that Shea needs them to. The open prairie isn’t a place where the weak can skate by, not even with the strong to protect them, as this show is displaying.

As for the Dutton’s, it’s clear that Margaret isn’t willing to allow the trail to toughen her son up until she’s good and ready, or until there’s no other choice. But she’s doing her best it would appear, and she’s well aware of how the world around her is trying to assert itself at all times. It’s shown in how Elsa is growing up, becoming more rebellious, and even questioning the ways of her parents. Elsa has even come to question the decisions of her father, as when it’s noted that the herd has been taken by thieves, as mentioned by Cookie, Shea, Thomas, and James ride hard to reclaim the cattle, with Elsa along for the ride. While James issues strict orders for her to run if they engage in a firefight, Elsa is resolute that she wants to go with them. As the three men encounter the thieves and are fired upon, Elsa runs, with several of the bandits in pursuit. While Thomas, Shea, and James are able to survive with the aid of a man that knows Shae quite well. Charlie, played by Taylor Sheridan, enters the story briefly as he helps to eliminate the bandits, but it’s Margaret that takes down the last one as he tries to threaten her for the horse she’s riding.

So far 1883 is doing its best to remain somewhat positive in the face of the many challenges that the early settlers who rode the treacherous trail to the west had to face, and it’s been a tough road for all involved. With only three episodes left in the season a lot of people have to be wondering when we’ll get to see the insane beginning that was revealed when 1883 started up, and where the Dutton clan will end up by the time all is said and done with season 1.