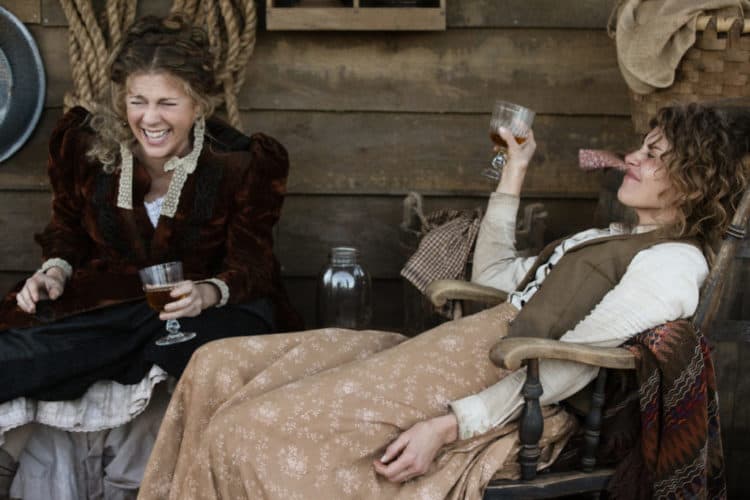 You can’t help but want to give Margaret and Carolyn, who’s played by none other than Rita Wilson, a clap of appreciation for their brief moment of levity in this episode. On one hand, it’s fair to say that getting drunk in the middle of nowhere isn’t the best idea, but after all the Dutton’s have been through it was what was needed. Of course, James likely didn’t see it this way, and the fallout was that Margaret did what most people in their cups do, she experienced the type of emotions that don’t often bubble to surface. The next day things were as they needed to be to maintain, but it’s obvious that things continue to move forward and become churned into the constantly growing strata that’s made up this story thus far. The loss of Ennis is still burdening Elsa, but the realization that she has others there for her and, thanks to her father, she’s not the killer she thinks she is, has kept her on the straight and narrow for the time being. It’s easy to think that change is going to keep happening, but thus far things are progressing in a manner that makes one think that those who need to be culled will be, and those that are meant to push forward will.

Calling Rita Wilson a pleasant break from the madness would be kind of accurate, but not entirely. Her character, Carolyn, offered a bit of respite to Margaret, who’s had to look into her daughter’s eyes and see the pain therein and feel it herself. As she said, she didn’t recognize the young lady looking back at her, especially after Elsa threatened to kill a man at the trading post that looked at her in a way she didn’t appreciate. Some credit is to be given to James Dutton since he didn’t exactly dampen the moment when Elsa pulled her pistol, but he defended his daughter and made it clear that if she didn’t fire, he would.

On top of that, James did come to speak to Elsa later on, after the reprimand he gave and made it known that she’s not a killer. The man she shot in the previous episode was already dead, as he stated, as he would have either bled out or been hanged. Elsa only hastened the process, she didn’t do the actual killing, as one might understand. But be that as it may, the main point is that Elsa’s turn to a hardened individual hasn’t been abated entirely, but it has been stalled thanks to the efforts of those around her, including Shea, who made his feelings on losing loved ones clear. At the current moment, it would appear that she’s not in danger of any eternal damnation, though it’s always possible that she’ll have to pick up that pistol again, since if anyone’s forgetting how the season started then they’ll be in for one hell of a shock when the time comes to reveal what was going on. As of now, the group has picked up a new cook that may or may not be kind of a problem later on since he already sounds a bit demanding, and a new cowboy that’s been made well aware of Elsa’s situation after having been told by Wade and rebuffed by Elsa initially.

At this point, the settlers have become little more than props to be lugged around and brought forward when the moment presents itself, which might have been the plan, to begin with. Only a couple of them have been highlighted for more than an episode or two, and it’s been to further a plot point or create a bit of tension in the group as things continue to get worse or simply progress. But as the group moves further into what’s considered indigenous territory, the danger level is only going to increase since the line between civilization and the wilderness has been crossed, and nothing but possible danger and death lies ahead. It could be that the trading post was the break that the bunch needed to make certain that they could continue onward, but with another river between the settlers and their intended course, it’s going to be interesting to see if more are lost, or if the settlers are finally beginning to learn.

With ten episodes scheduled in what will hopefully just be the first season, 1883 has already turned into what feels like a gritty and hard-hitting, but very dramatic, beginning that was needed for Yellowstone. The Dutton mindset is already starting to form, and it’s bound to be fair to say where Beth Dutton would get her inherent toughness from since her ancestors are already being forged in fire, so to speak, and would no doubt have passed a great deal of that attitude down to their descendants.