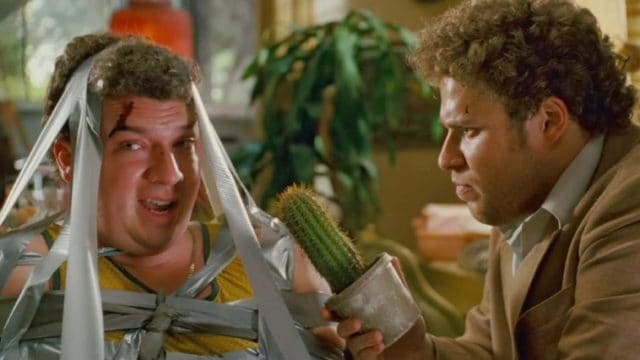 Pineapple Express is kind of like what might happen if a stoner got a bad batch of weed and started to hallucinate. Conspiracy theories, plots to kill them, and a very real and present danger in the form of a drug lord and a corrupt cop take off after Dale and Saul in an effort to, well, erase a problem since this movie is all about smoking weed and staying alive it seems like. It’s kind of like a stoner’s idea of a screenplay that moves along at a pace that those who are getting high can follow and somehow appreciate since it’s technically about smoking weed.

No, I am not stoned, that’s honestly what the movie seems like.

10. The diner scene at the end was improvised.

This was something that the actors got together and decided to do. It was not in the original script at all.

9. Seth Rogen was originally going to play the part of Saul.

He eventually realized that James Franco would be better in the part and took on the part of Dale instead.

8. Rogen rolled every joint himself.

This should tell you that he does have a lot of experience in this kind of thing, which is why it shows up in all of his movies.

7. Franco worried about hurting Rosie Perez during the fighting scene.

The fight scene was highly improvised so he kept asking what he could do since he didn’t want to hurt her. He did end up giving her a bruise on her leg from biting her though.

6. Danny McBride was actually hurt when Franco smashed him over the head with the bong.

There was just enough water in the bong that it had a much harder impact than Franco had planned.

5. James Franco ended up needing three stitches after running into a tree.

Franco kind of got ahead of himself and got a little too into the moment when he ran face first into the tree.

They wanted to operate with a budget of $50 million at least but thanks to all the drug material they were only able to get half of what they wanted.

He was still too brand new to the scene so he held onto it for a while and by the time he’d done the 40-Year Old Virgin and Knocked Up he finally had the nerve to bring it out and see if it sparked any interest.

2. The Asians in the film are South Koreans.

Just so we’re clear when we’re saying ‘Asians’. It’s better to know what you’re talking about rather than just lump everyone into one continental group.

1. The F-word and its variations are said about 180 times.

This seems to be a common staple of any movie that Seth Rogen is in since to be quite honest almost every one of his movies has this word or some derivative of it popping up pretty often.

It is a true stoner movie the whole way through.