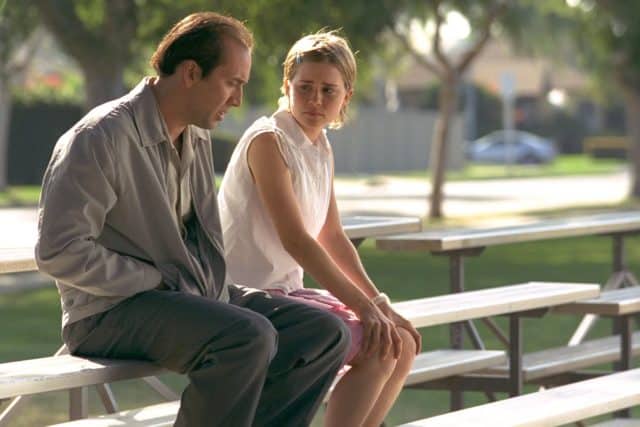 Matchstick Men is a giant game of who’s-conning-who that eventually ends up in a twist that you likely never saw coming. Roy is a professional con man with Tourettes Syndrome and Compulsive Obsessive Disorder and even a hint of agoraphobia to add to it. He’s a mess inside but at least on the outside he can keep it cool, most of the time. When he learns he has a daughter however his phobias start go away somehow. Yet when his partner and protege, Frank, and his ‘daughter’ scam him for all that he has he eventually gets out of the con business and becomes an honest man.

It’s the kind of movie that makes you wonder just who you can trust.

She showed up to the set dressed as a 14-year old girl and it took a while for the director to find out how old she was.

9. The pills Roy was taking were Benadryl.

When he gets to the pharmacy he’s directed to an aisle where he finds the same exact pills that he’s been given, which turn out to be estrogen pills.

8. Frank got his name from two different people.

His name came from the combination of Frank Sinatra and Johnny Mercer.

7. The scenes depicting LAX had to be filmed in Anaheim.

The security around LAX was very intense and gaining permission to shoot anything was virtually impossible at the time due to increased measures used to prevent any possible risks.

6. This is the first movie Ridley Scott did for Warner Bros. since Blade Runner.

There was a good chunk of time in between this collaboration and the last, enough so that people might have been slightly surprised by it.

5. The last con was almost left out of the film.

Some folks thought it was just too negative to show Roy being left penniless after being robbed by his former protege and daughter, but Ridley Scott argued for leaving the scene in.

4. It was kind of a box office disappointment.

It only made a reported $65 million and it’s budget was around $62 million, which means the profits were very low and it was more likely that people went to see this out of curiosity more than anything.

3. Roy never checked with Heather about his daughter.

You ever notice how he didn’t go straight to Heather when his ‘daughter’ showed up? That seems awfully strange for a man that knows how to run an expert con job.

2. People with OCD do in fact exhibit many of the symptoms in the movie.

The opening and closing of the doors a certain number of times, the need to be clean and pressed at all times, and even a few other tics that Roy exhibited were seen to be quite accurate by many people though not all-inclusive.

At some point he did get better when his ‘daughter’ was around, though it’s also proven when he realizes that he’s been taking placebos even during such moments.

It’s all a matter of who can pull the longest and most convincing con.