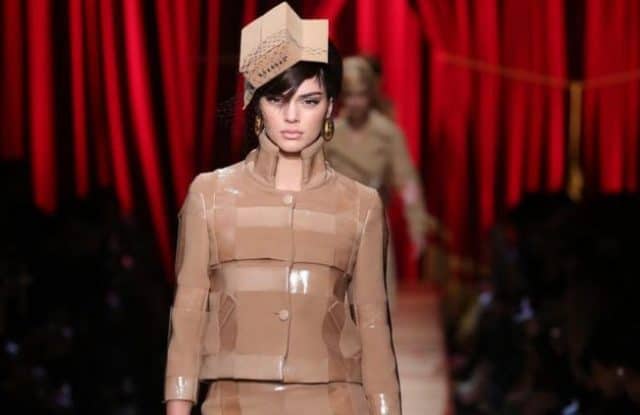 For those of you who have seen Zoolander you’ll remember that in the final scene of the movie Derek’s modeling for the “Derelicte” campaign which was really just a play on “derelict.”  The entire campaign was based on the dirty refuse of the city and inspired by the homeless.  While the fashion world isn’t shy about being bold, strange, and weird I never thought that actual trash would be used on the runway.  But I was wrong.  Taking a page right from the Zoolander story, the Moschino fashion show featured trash, literally.

Kendall Jenner opened the Moschino show wearing a UPS crate as a hat. She wasn’t the only one. Gigi Hadid wore a trench with “fragile” stamped on the belt.  Marjan Jonkman wore tin cans instead of bracelets; Stella Maxwell swung a gym sock around like a purse; and Elsa Hosk wore a swath of bubble wrap as an evening gown.  There was even a model who was dressed like a dry cleaning order being picked up.

The only movie I’ve ever seen that parodies modeling pretty well other than Zoolander was Pret a Porter where the end scene is models just walking around nude (who eventually get a huge round of applause).  I feel like the fashioning (and cinematic) world just took a huge step backwards.