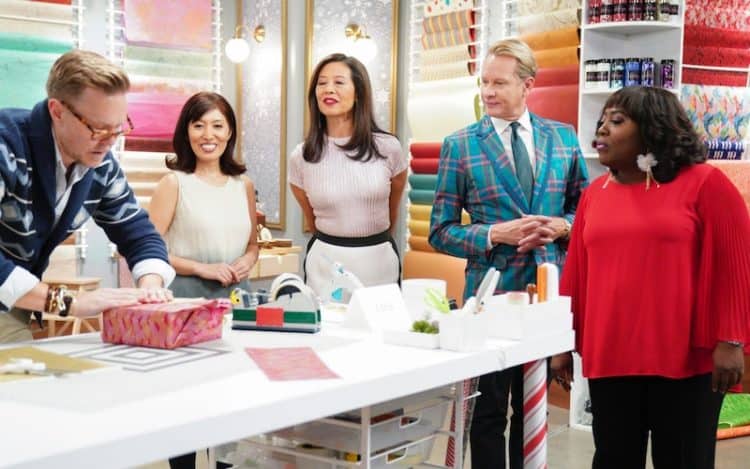 The holidays are coming. You can smell them from here because the pumpkin spice everything, and cinnamon grocery stores have already rolled out the red carpets. It’s not even Black Friday yet, but everyone is already thinking about what they plan to do after the turkey-coma wears off. If you’re looking for a little inspiration, then you’re late to the game, but there’s plenty of time to catch up before the next episode airs. We’re speaking, of course, about Wrap Battle. This brilliant show pits present wrapping gurus against each other in the ultimate battle of the boxes and bows. Here are ten things you didn’t know about Wrap Battle.

1. Kindness is a Gift

As you might expect from a show about wrapping packages, what’s on the outside counts a great deal. However, there’s more to the present wrapping spirit than how pretty our bow comes out. The participants and judges on the show find ways of expressing themselves while mostly working toward a pleasant and cheerful spirit. It doesn’t always work out, but on this superficial show, it turns out the inside matters too, and we’re not talking about the boxes.

There are gifts that go in bags, and those that belong in boxes, but what do you do with a gift that doesn’t fit the mold? You could get a giant box, but participants were asked not to do that in the very first episode. Instead, they were tasked with making some insane things look like they belonged under the tree on Christmas morning without losing the shape of the items they wrapped. From a bicycle, and a giant bear to a massive plastic cactus and a weight bench, the judges didn’t pull any punches when they challenged the wrappers to pull out all the stops. Some came out beautiful, and others fell flat, but the moral of that holiday story was clearly about what you can’t hide.

3. More Drama Than the Presentation

The competitive wrappers bring a lot to the table in terms of flare and panache. Some of them wrap gifts for a living while others just have a knack and a will to win. Yet even on this kindness and cheer based show, dramas can flare up between contestants. More than the prizes at stake, some people simply don’t mesh well. In the second episode, there were tears over who didn’t go home.

What the judges think and what the contestants see aren’t always the same. From sore losers to sore winners, everyone has their own perspective. The person who won the very first quick wrap challenge ever on the show hated the job they did. We’re trying really hard not to spoiler anything. That way, you can be as surprised as the first winner is when you get a look at things from the judges’ perspective.

If you’ve ever hastily thrown together gifts the night before you had to celebrate a birthday or holiday, then you know a bit about imperfect gifts. However, that’s as far as you can get from what the Wrap stars are trying to achieve. Beyond just having a good crease and enough paper, there’s a whole art form based around the wrapping and presentation of packages. Forget keeping up with the Joneses, or even the Kardashians; these incredibly talented decorative artists are trying to keep up with the big man himself, Santa.

Wrappers aren’t on this show for the pure joy of making pretty packages. There’s a big prize at stake for the winner. Whoever becomes the champion of Wrap Battle gets fifty thousand dollars in cash and prizes, but that’s not all. The winning wrapper will also get to design their own wrapping paper for Paper source. Plus, they will be a featured guest wrapper at the prestigious Sono Collection. That’s a pretty big win for putting together some ribbon and paper, but as we said, there’s a real art to getting it right.

It’s not all jingle bells and figgy pudding on Wrap Battle. In addition to the prize, if you win, there are consequences for losing. Like any competition, the person who does the worst job goes home at the end of each episode regardless of their overall talent. However, being at the bottom of the smaller challenge also gives you a disadvantage. Sometimes it means getting the last choice of materials, others it’s a time penalty. Whatever the case, you don’t want to fail when the world is watching, you show off your skills.

We love everything about Wrap Battle, but one of the coolest things about the show is that you can watch it for free on Freeform TV.

9. The Judges Know Their Wrap

The judges, along with occasional guest judges like a group of kids or the hilarious comedian Sherrie Cola, really pa attention to the details. Host Sheryl Underwood and judges Carson Kressley and Wanda Wen all know a good design when they see one. They aren’t afraid to provide thoughtful and constructive criticism where it’s needed and let contestants know precisely what they did, whether it’s all right or horribly wrong.

Some shows give the contestants what seems like forever to get the job done. Not Wrap Battles. Every second counts on this fast-paced show. When the time runs out, contestants have to put their glue guns and decorations down, whether it’s a hot mess or a scorching success.

We’re looking forward to the holidays, and Wrap Battles is the perfect way to get inspired for the task of creating some gorgeous gifts. Of course, we’re probably not going to succeed at creating the level of splendor you’ll see on the show. Still, we’re certainly going to try a few new decorating ideas this season thanks to the talented and brilliant contestants and hosts of WB. Now that you know a little more about the show, you know what to binge-watch on Christmas Eve if you get a little behind and have to stay up to wrap gifts. Even if you’re not rushing for package wrapping inspiration at the last minute, you don’t want to miss out on this fabulous Freeform show.