Home
Television
Will and Grace
Will & Grace Review: Like Karen, We Were Not Ready To Say Goodbye 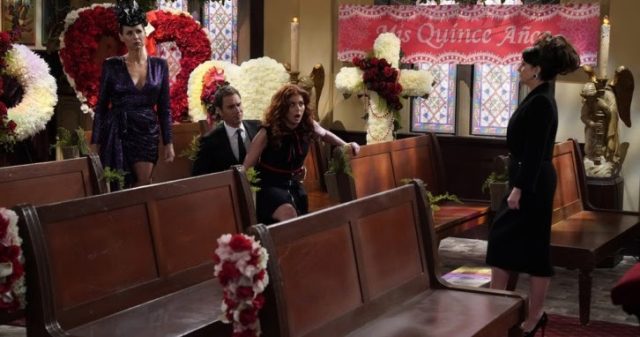 Karen Walker walks through life with a martini glass in one hand, and a maid on the other arm. For decades, that maid was her favorite sparring partner, Rosario. That all changed this week when Will & Grace said a final farewell to television’s favorite maid, Karen’s beloved Rosario. Instead of a sappy funeral, Karen chooses to handle her grief her way. Essentially, Karen remains Karen, just with a higher probability of snapping at someone. “Rosario’s Quinceanera” is a fitting goodbye to Karen’s best person, or at least the best person to keep her house.

From the second Karen is told of Rosario’s passing, she shuts down, and is more unbearable than usual. You could literally see poor Jack’s brain imploding from the strain of trying to keep Karen sane. Not that Karen would ever be considered a sane person, but you get the point. Normally, Jack would know exactly what to do. But Karen is in such pain, she gets whatever she wants. What Karen doesn’t need at this time is her twisted daughter-in-law Lorraine Finster (guest star Minnie Driver) returning in her time of mourning. My first reaction was “Duck and cover, duck and cover!” However, Lorraine didn’t have much of a purpose in this episode other than to return at the worst possible time, but nothing became of it.What Karen really wants is to drink more gin than usual, and make Jack her dancing monkey, and I mean that literally. He had better luck convincing the nuns of the graphic legitimacy of his and Rosario’s marriage.

Life and death should put things in perspective for Will and Grace, who have their first fight as business partners in the middle of Rosario’s funeral. Long story short, there are still some kinks in the road to work out. Interestingly enough, Debbie Reynolds’ death is also addressed in this episode. Grace’s tendency to make everything about her snowballs when she attempts to “comfort” Karen. That includes sobbing about her own mother’s death, screaming about how she was her mother’s favorite. Will is the one to get through to Karen, telling her that she can grieve however she wants to. Karen doesn’t need to grieve in front of people, she just needs a private moment with her Rosie. “She was my maid, she was my sparring partner, she was my best friend. You were my everything…I need for you to not be gone.” For their relationship, it’s as simple as that. Of course, Karen buries Rosario her way: with her mother’s ring and the cleaning products, and a final “Te Amo, Mami.”

Call this premature if you wish, but I’m going to go here anyway. There’s a scent in the air, and it’s not the incense or flowers in the church. It’s Megan Mullally’s impending Golden Globe nomination.

Will & Grace pays an emotional, funny, and fitting farewell to one its most beloved characters.