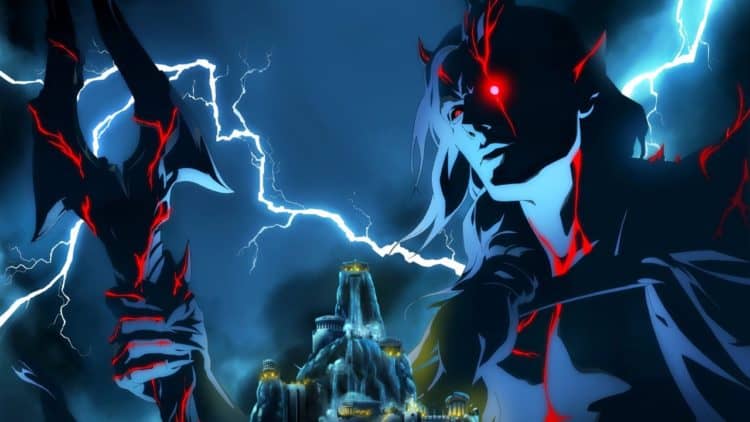 I’m so happy that Netflix exist right now. In a time where the whole country is still in lockdown, Netflix is here to fill the void. Man, I miss going to movie theaters. I really hope things start to turn around by next year, but for now, I can only hope. Also for now, I have to be content with streaming services like Disney+, Prime TV, and of course, Netflix. It’s the only way I can watch new things that were meant for a 2020 release. Movies that are Netflix originals have taken a good route, but with television shows, it was inevitable either way. Speaking of which, one recently released television show that I checked out really hooked my attention. It’s an original anime-style series called Blood of Zeus.

As the title suggest, the story revolves around Greek mythology. It’s pretty much what you’d expect it to be in terms of what kind of plot. It’s a fantasy/action series that takes place in ancient Greece that involves all of the Greek gods of Olympus. Let me just go right off of that and say that I know stuff like that has been done before. The main character is a guy called Heron, a demigod and one of the many sons of Zeus. His mission: to save everyone on Earth and on Olympus from total destruction. Sound familiar? Clash of the Titans, Wrath of the Titans, Immortals, the list is practically endless.

So why should you check out something that’s been done a dozen times before? Well, for starters, it’s anime. As many times as we’ve seen tales of  Greek mythology shown in movies, I can’t remember the last time they were shown in anime. I’ll admit, I’m not the biggest anime fanatic in town, but it does intrigue me. In this case, I saw a genre that I enjoy seeing and how it was told in a different fashion. Right off the bat, there’s a difference that separates it from what we’ve seen before in past, live-action movies. In my opinion, that makes it more interesting and greatly deviates from what’s been done before. So if you’re a fan of anime, check out Blood of Zeus.

I want to dial back a bit and talk about what we have seen before when it comes to this genre. How many times have we seen a demigod, more specifically, the son of Zeus step up to save the world? One of the movies I mentioned earlier was Clash of the Titans and its sequel, Wrath of the Titans. It’s the story of Perseus, a demigod and the son of Zeus, going on an adventure to kill Medusa and then stop the Kraken from destroying humanity. The sequel (which was more disappointing), was basically the same thing, but with different monsters. And yes, he does battle gods in both movies. In Clash, he battles Hades, god of the underworld and brother of Zeus, and in Wrath, he battles Ares, the god of war and one of Zeus’ children. Does that sound cliche? That’s because it pretty much is.

Let’s stray away from movies for a minute and talk about when video games explore the realm of Greek mythology. Gamers already know where I’m going with this. Oh yeah, the one and only God of War franchise. I can’t talk about Greek mythology shown in other media without bringing up God of War. If you’ve never played the games before, guess what the plot is about? The protagonist is a guy called Kratos and he’s, wait for it, a demigod and the son of Zeus. However, he’s not exactly the hero type like in the classic tales of Greek mythology. In fact, he’s not a part of Greek mythology at all. He was created just for the game.

That’s new, but what was even more different about it was that Kratos wasn’t out to save the world. His one goal was to kill all the gods of Olympus because they murdered his family. Yeah, not exactly your ideal protagonist, but to be fair, the gods had it coming. The point is, the developers behind God of War took a concept that’s been done before and added their own little nuances to it. That’s how God of War is different from the other Greek mythology tales that we’ve seen told in several movies and that’s how it succeeded.

In the case of Blood of Zeus, the creators behind it took a similar route. Heron, the main protagonist, is not a character from the classic tales of Greek mythology. Like Kratos, he’s a original character created just for this show. Their backstories are basically the same, given that they’re both demigods and illegitimate sons of Zeus. The difference is that Heron’s path was more similar to that of Perseus or Theseus from Immortals. Perseus and Theseus are both considered to be heroes of classic tales where they went on a quest to kill a dangerous monster. They defeated their enemies and then saved both gods and humanity. If you’ve seen the movies, Perseus lost his adoptive father at the hands of Hades and Theseus lost his mother at hands of the tyrannical king, Hyperion.

Guess what? Heron’s mother was killed in the beginning by one of the main antagonists of the series, his demon half-brother, Seraphim. Sounds like the same story over again, right? Well, the origins are undoubtedly similar, but the difference lies in who he’s fighting against. Throughout most of the series, the main perpetrator behind the evil acts is Hera, the wife of Zeus. Heron’s mother was the unwilling wife of an abusive mortal king who found true love in Zeus. When they were discovered, Zeus took Heron and his mother and hid them. Sure enough, this didn’t sit well with Hera, so she made it her personal mission to enact vengeance on Zeus. She sent Seraphim after Heron and orchestrated the death of his mother. Yeah, Zeus did cheat on her, but she’s still a massive B-word in his show.

While Hera is the evil mastermind of the series, Heron’s physical challenge is Seraphim. He’s a demon and can convert any of his victims into becoming one. He rides some sort of winged monster and uses a magic spear that comes back to him when he puts his hand out. Yeah, it’s basically Mjolnir, but it’s a spear. Because it’s anime, Seraphim looks very scary and also very cool, just like his demon minions. In my opinion, anime can make anything look scarier. For Seraphim, he’s scary, badass, and also a tragic character. His backstory is a sad one and he didn’t choose to become what he is, but he is on a path of vengeance. He eventually crosses paths with Heron and things get violent.

This sounds like a typical adventure of Greek mythology, but Heron’s battles are far more personal. He fights his aunt and his brother, and for me, I’m just a big fan of the sibling rivalry conflict in movies and shows. He’s not just fighting monsters, but his own family. Heck, even Zeus is shown to be a heavily flawed character, being portrayed as omnipotent, but still infallible. He’s king of the gods of Olympus, but he’s not the best father. When Zeus takes Heron under his wing, he struggles on how to mentor him, given that he had to fend for himself since birth. Watching the chemistry between them improve was one of the highlights of the show and seeing a god like Zeus act more and more human was good character development.

That’s what intrigued me most about the show. It’s a fantasy show with heavy action, but there’s a big family element to it. Basically, the show is about family. Sibling rivalry, daddy issues, and betrayal from your own blood is the essence that drives the show. If you’re into that, you’ll dig Blood of Zeus.

If you’re a big fan of Greek mythology, Blood of Zeus is right up your alley. Or if you like anime or fantasy and action blended together, then you’ll love this show. It’s a fun series to watch, so if you’re stuck at home, pass the time and go back to Netflix.