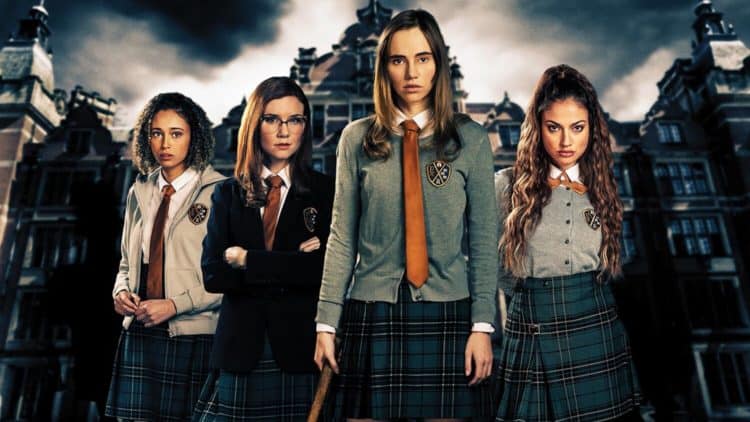 There are plenty of movies that feel as though they’re bound and determined to follow a set formula while trying to embellish just enough to give the feeling that they’re new and exciting, but there is some comfort to be had in the idea of following that set formula, since it’s familiar and can be plotted from point A to point B. Already the trailer to Seance makes it apparent that the movie will begin with the admittance of a young woman to a top-notch boarding school. She might be a bit odd, a little awkward, but she’s confident enough in her own sense of self, even if this causes her to be picked on by the resident bad/popular girls that will attempt to put the young woman in her place. Eventually, events will happen that will bring about the necessity for the seance, which will be the main part of the movie. What happens up until that point is a great deal of filler that can go directly into the plot of the movie or can detail the various antics that happen within the school between the students. However it happens, the story will end up twisting and turning its way to the main point, the seance, which will be used to contact a spirit, presumably one that died within the school since it’s apparently trendy to contact dead people, kind of like the latest TikTok trend, since the implication is that nothing will happen and it will be one big goof. But then, of course, the trouble starts not too long after.

The spirit, which is angered or allowed greater power once the seance is held, however it happens, will begin to materialize and take out its frustrations, or possibly give payback, to those that summoned it and will torment the living until they begin to turn on each other, point fingers, and begin to fall to pieces since they don’t know what’s going on. At some point someone will research or discover the horrible secret that will explain the haunting and will do what they can to escape or appease the spirit in order to survive. But of course, once things start getting bad they get even worse without fail since people will panic, the spirit will start taunting them even worse, and folks will look out for their own self interests. It’s bound to follow formula, and the only other thing that would make it entirely predictable would be the ability to select who’s going to die and in which order. That’s pretty standard for a lot of horror movies, especially those that deal with spirits. But again, that’s a comfort zone kind of thing and a lot of people are bound to get into it since that type of thing is still very popular.

From a horror aspect the movie is something that does manage to catch the eye since it features a good number of stereotypes that fit into the movie without fail since for a movie like Seance there need to be certain types of characters to make the thing feel complete and work in the expected manner. But from the look of the movie it’s going to be fairly dark, the secret that the school is trying to keep under wraps isn’t going to be hard to discover, and the spirit is going to be fairly playful but also vengeful. On top of that, the school authorities don’t appear as though they’re going to be too concerned about things beyond the usual announcement that one of the students passed away and they’ll do their best to take care of those that remain while possibly offering counseling if it’s needed. It’s a movie that we’ll definitely watch, but it’s probably better to sit down with lowered expectations if only to make it possible to be less disappointed since like it or not, movies such as Seance are kind of similar in a lot of ways, and it’s very possible that it will be one of the many that will be kind if predictable in a lot of ways. But, if it’s not, then it will be a nice surprise since as a lot of people should be able to guess, a trailer can show the highlight moments, it can show the meat of the story, and it can sometimes ruin the movie for a lot of people. It can also hide things by showing what people might think of as normal for such a story.

That’s one hope that we have for this movie, especially given that horror movies about the occult and vengeful spirits are, when done in a convincing manner, an absolute thrill that can grab hold of the audience and refuse to let go until the credits start to roll. So yes, here’s hoping that whatever is conjured is more than what we’ve seen.