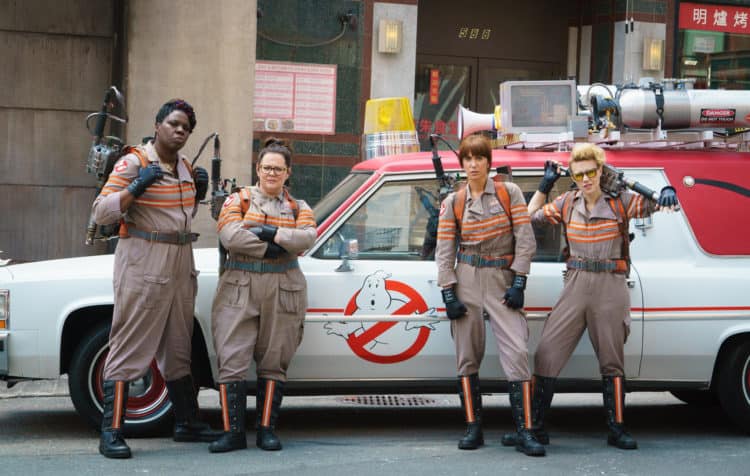 In two months, the Ghostbusters franchise is set for a reboot once again, with the movie starring Paul Rudd, Carrie Coon, and Finn Wolfhard, with most of the original cast making a return for the 2021 feature. This time around, there appears to be excitement in the air for the Paul Rudd vehicle, which can’t be said for the 2016 all-female cast film from Paul Feig. Before the upcoming Ghostbusters movie, the 2016 female-centric movie was originally the next direction for the franchise, with reported sequels expected if the movie did well at the box office. Starring Melissa McCarthy (Spy, Bridesmaids), Kristen Wiig (Wonder Woman 1984, Mother!), and Kate McKinnon (Bombshell, Yesterday), the film centers around paranormal researcher Abby Yates and Erin Gilbert, who manage to find strange apparitions around the New York area. With the help of engineer Jillian Holtzmann and Patty Tolan, the four take on the tough task of battling mischievous ghouls around Times Square.

The 2016 reboot ended up garnering a solid 74% on rotten tomatoes, though there was plenty of negative buzz surrounding the film going in. The movie massed over $22o million worldwide, though the production budget was reportedly $144 million. Ghostbusters ended up losing nearly $70 million, and any plans for a sequel to the female-centric version were canceled. So, what happened? Melissa McCarthy and Kristen Wiig have over ten movies that have made over $100 million domestically, with Paul Feig having a proven track record himself. Let’s dive deeper into the likely reasons that the 2016 Ghostbusters failed at the box office.

This one is quite baffling really. As previously stated, Ghostbusters entered the theater market with negative buzzing surrounding the film and that’s mainly due to the original Ghostbusters fans trashing the film for being rebooted with a female cast. This mainly came from male fans, who petitioned the movie even before the first trailer dropped. Once the advertisements started, the hate from original Ghostbusters fans only intensified; Currently, the 2016 Ghostbusters trailer has 1 million downvotes, with only 320,000 liking the official trailer. There’s no exact reason why most were outraged by this product. Many despised the idea of Sony trying to replicate the 1984 film with a female-centric cast. Others believed it would be another feminist movie denouncing men and powering up women. Whatever the reason was, Ghostbusters got unnecessary hate and it’s amazing that the sci-fi remake wasn’t a total flop.

The Trailer Turned Off Many Original Ghostbusters Fans

For those who didn’t have unbridled hate for the remake, the trailer likely turned off audiences who were open to giving the 2016 version a chance. Ghostbusters should’ve been a hit based on the talent in front and behind the camera; however, the trailer didn’t put the film in a positive light. Ghostbusters just came across a carbon copy knock-off of the original with forced humor from its talented four leads. Couple that with the fact that the movie had heat before the big trailer premiere, Ghostbusters really needed to prove its existence and the trailer confirmed that it was nothing more than a cash grab. Of course, every release is a cash grab, but simply copying and pasting the 1984 film with a female cast just wasn’t going to cut it for most fans.

The Movie Failed To Live Up To High Expectations

Let’s make this clear, no one had high expectations for this film going into opening weekend. However, the movie needed to exceed expectations because of the unnecessary negativity surrounding this film. While the internet crowd is very vocal, a couple of keyboard warriors whining and complaining doesn’t mean that this movie was guaranteed to be a failure. In the end, Ghostbusters was…decent. It wasn’t as terrible as the trailers made the film seem to be; however, it was nothing that most audiences would rave about once they left theaters.

Melissa McCarthy, Kristen Wiig, Kate McKinnon, and Leslie Jones worked well together, with McKinnon and Jones being the standout of the film. While you get a few laughs here and there, the storyline overall is dry and a lot of the comedy doesn’t land. Chris Hemsworth’s character is over-the-top stupid, and the film refuses to stop beating the dead joke. Ghostbusters needed glowing reviews so that good word-of-mouth could help this film beat all odds and draw a healthy box office number. It managed to open with a strong $46 million but the film quickly faded away from the box office. It’s truly a shame that most fans hated this film without giving it a chance first; however, there’s denying just how average the remake is.