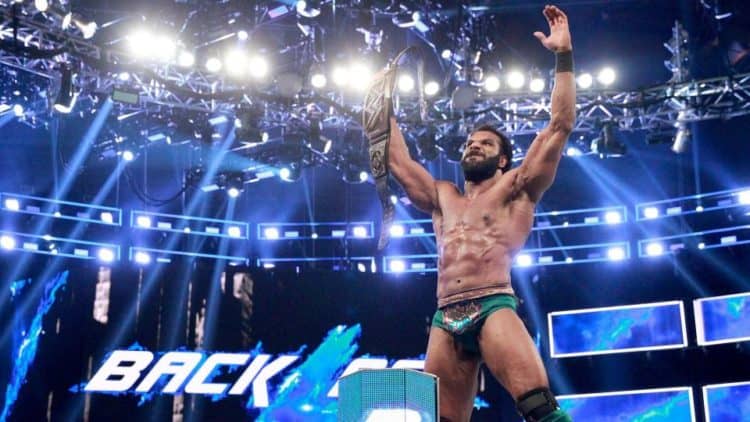 Remember when Jinder Mahal was WWE Champion? The former member of 3MB went from competing on Main Event to suddenly winning a six-pack challenge involving Dolph Ziggler, Erick Rowan, Luke Harper, Mojo Rawley, and Sami Zayn, that skyrocketed him into the main event title picture. Then, the Smackdown star pulled off one of the most shocking victories in the modern era, beating Randy Orton to win the WWE Championship for the first time ever in his career. Now, the reported reasoning for Mahal’s out-of-the-blue push in the main event scene was due to the fact that WWE was touring India in December of that same year. The company was looking to push an Indian star and Jinder ended up getting the biggest push of his life. Even though the former WWE Champion is Canadian. Still, this is just a rumor, and given the fact that Mahal dropped the belt a month before officially going on tour in India, this could’ve been a simple case of Vince McMahon waking up one morning and deciding that the Mahal should be the WWE Champion.

However, Mahal was mostly used as a glorified jobber throughout his second run in WWE. Sure, he was getting good wins over Sin Cara and Curtis Axel on the barely seen Main Event; however, his win/loss record before his surprise win in the No. 1 contender’s showcases plenty of quick, squash-like losses to Roman Reigns, Big Cass, The New Day, and even Mojo Rawley! There was no major storyline going on with Jinder Mahal nor did any sort of push seem in-store for the WWE superstar. Obviously, I can’t comment on the rumors about the reasoning behind Jinder Mahal’s push because it hasn’t been confirmed by Vince McMahon or any of the creative members, but this was the first issue regarding Mahal suddenly winning the WWE title at Backlash 2017. The company should’ve spent the time building Mahal up as a credible threat by developing his character and giving him huge wins over top talent. Jinder Mahal was a jobber for 90% of his WWE career. To suddenly go from dropping quick matches against name talents to being WWE champion actually harms the belt more than helps it. This isn’t the UFC, so this isn’t a scenario where anything can happen. Fans aren’t going to instantly buy that a man who spent a good portion of his time on losing in his career as a top-tier competitor. Mahal needed time to grow into the role of a main event star and winning a couple of matches wasn’t going to cut it.

It’s great that the company took such a huge risk by pushing a new name to the top of the card, but there’s a difference between Bron Breakker and Jinder Mahal. If Breakker suddenly came in and beat Roman Reigns for the WWE Universal Championship in his first match ever, then it’s more believable than Mahal’s win. First, Breakker is pushed as an elite talent in NXT; The guy is currently the NXT Champion! More importantly, Breakker isn’t damaged goods like Mahal. While there are certainly negatives against giving Breakker the WWE Universal Championship on his first night on the main roster (with the most notable being that Breakker should establish his character to the wider Smackdown audience first), it wouldn’t devalue the championship in the slightest. However, it wasn’t just the fact that Vince McMahon strapped a rocket to Jinder Mahal’s back so quickly. It’s the fact that Mahal is an extremely boring wrestler.

No offense to the man himself as I’m sure Mahal works hard to perfect his craft inside of the ring, but there’s not one match during his WWE title reign that many fans fondly remember. Part of that is due to the fact that Mahal didn’t have much experience working a main event style match. The other part is that his character was the generic, chicken heel type who consistently needed to cheat to win his matches. Mahal may have gotten big wins over undercard talents, but he failed to cleanly beat top tier wrestlers like Randy Orton or Shinsuke Nakamura. The formula for Jinder’s matches was that the former champion would take over a good portion of the match with different sets of rest holds, the babyface challenger would get a big comeback, and the Singh Brothers would help Mahal retain his belt. I guess the company did mix up the formula by having The Great Khali help him win the Punjab Prison match, but his matches ultimately became too predictable. There was no electricity or spark doing Jinder Mahal matches, and his feuds were far from compelling as well. The Jinder Mahal experiment didn’t work because he was never met to be a main event star. His personality was extremely bland and that clearly translated during his championship matches. It’s certain one of the worst (if not the worst) title reigns in the past decade.