Home
Television
WWE
Does Triple H Deserve To Be Blamed For NXT’s Loss To AEW? 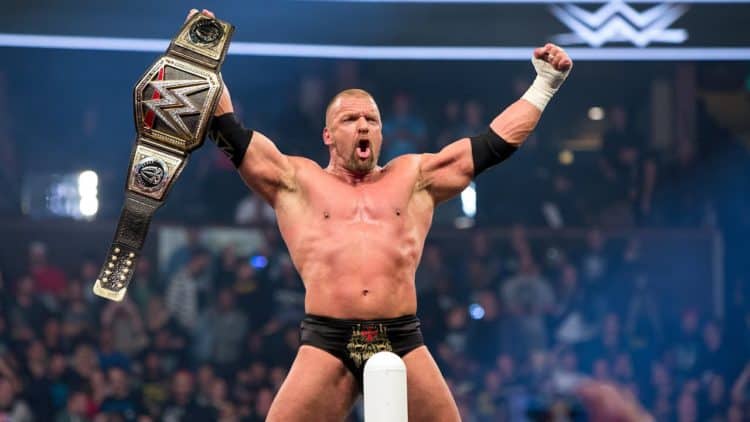 The history of NXT is certainly an unorthodox one. First, the developmental brand was conceived as some type of wrestling-based reality show with the likes of Daniel Bryan and AJ Lee coming from the forgetable format. The NXT experiment ultimately tanked in the ratings and the format was rebooted in 2012. It went back to its developmental roots under the helm of former WWE Champion Triple H. Slowly, the new NXT was gaining steam among the masses as their TakeOver pay-per-views consistently received high praise. As the years went by, Triple H soon started acquiring the hottest independent talent and the quality of NXT only seemed to be getting better. Before NXT made a permanent move to USA in September 2019, it was at a high peak as both critics and fans loved the grounded and long-term storytelling of the developmental show and the incredible matches that resulted thereafter.

Then, All Elite Wrestling arrived. The company was announced in January of 2019 but made its official television debut on October 2, 2019. Several years prior, WWE jumped the gun by moving NXT away from the Network exclusively and putting the developmental brand on prime-time television. The black-and-gold brand managed to capture over one million viewers in its two weeks ahead of AEW Dynamite but slipped once the new promotion made its debut despite a huge TakeOver worthy card. Unfortunately, NXT never recovered once the Wednesday Night Wars began. Let’s be honest, the purpose of moving NXT to USA was to take viewers away from AEW. Originally, NXT was a one-hour program designed to showcase its developmental brand on the WWE network. Yes, AEW did invade Wednesday nights as it was established by NXT, but given the sudden changes before the official premiere of the company then its clear that WWE wanted a war. There’s no denying that NXT lost the battle. In the first couple of months, WWE tried their hardest to get over NXT as another major brand, with the developmental show actually dominating the Survivor Series pay-per-view, but AEW simply couldn’t be stopped by NXT. The Wednesday nights wars came to an end in April 2021 when NXT moved to Tuesday nights, and the brand as we know it changed forever.

First, mass firings of original NXT talents both in front-and-behind the scenes took place. There was a new edict that Vince McMahon was looking to reboot the brand once again, but under his vision. Now, NXT 2.0 is a shell of what Triple H worked so hard to craft since 2012. Was NXT’s loss to AEW Triple H’s fault? Here’s the thing, there’s multiple reasons why the black-and-gold brand failed to dethrone AEW in the weekly ratings battle. At the end of the day, NXT was a developmental brand, and that was clear based on the production values of the show. AEW felt bigger because the production values felt on par with RAW and Smackdown. Huge crowds, big arenas, AEW Dynamite was a fresh-and-exciting product that was a hot commodity. In comparison, NXT was exposed for being a little bland and too grounded in realism. Fans want entertainment, and surprisingly, that doesn’t mean just wrestling. Of course, wrestling is a key part of why fans enjoy the WWE product, but the big moments such as Austin giving Vince McMahon and The Rock a beer bath or even segments with DX, or The Rock are what fans crave as well. The sports entertainment part is just as important as the wrestling.

AEW originally promised to be a more reality-based wrestling program like New Japan Por-Wrestling, but it’s honestly WWE lite because they have sports entertainment too. NXT was missing the larger-than-life characters and AEW had a more colorful and exciting roster. Strong wrestling just wasn’t enough in the war against AEW. However, it was also notable that the quality of NXT went down as it settled into its USA timeslot. The compelling stories were slowly disappearing, and it soon became apparent that NXT was best served as a one-hour program. The move did more harm than good to the black-and-gold brand overall. Given the fact that Triple H was in charge of creative and the developmental process than he does share some of the blame here. However, some of the blame also goes to Vince McMahon himself. The WWE name is tainted in the minds of some former fans as there are people who mainly watched AEW because they didn’t want to support the WWE name. NXT was a great show, and even during its decent weeks, it was still better than RAW and Smackdown.

Toss in the fact that it eventually became pointless in watching NXT when the end result was disastrous. Despite Triple H working extremely hard to get over the new generation of talent, Vince McMahon failed more than 90% of the NXT call-ups once they hit the red or blue brand. Exactly what’s the point in watching the stars of tomorrow if the end result sees them likely reduced to working Main Event regularly (Ricochet, Robert Roode, T-Bar) or released eventually (Aleister Black, Andrade, Keith Lee, Karrion Kross)? WWE was a tainted brand in some minds, and unfortunately, NXT was caught in the crossfire. AEW exposed the weakness of NXT, but more importantly, it was a fresh opportunity for old fans to love wrestling again.