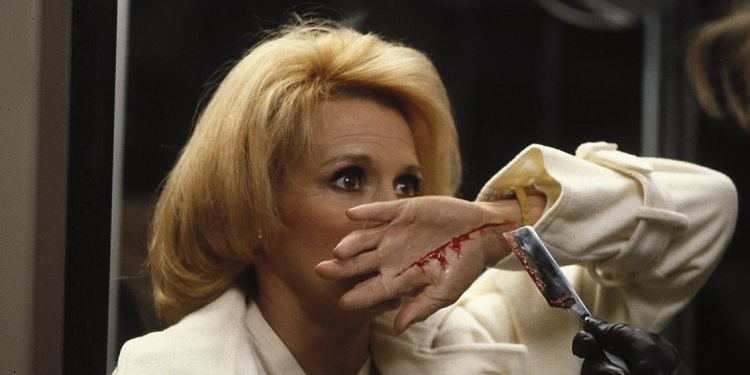 Like everything else in life, freedom of speech and artistic expression are always open to interpretation by whatever ideology is in charge of regulating laws. In this day and age, “controversial movies” is a phrase that practically no longer has a viable meaning. Human behavior in and of itself is universally different, and this means that something someone does or says is bound to offend another person. How we deal with how people express themselves, or more importantly, how artists like filmmakers address the controversy in society, is almost always guaranteed to be misunderstood. One controversial movie from the past that would never get released today is Brian DePalma’s Dressed to Kill (1980).  But you could just as easily analyze numerous controversial films since then that certainly do offend some but invite important conversations about what it means to exist in a society with numerous points of view, and numerous lifestyles that go against a pre-defined and archaic mold of what a person should be. But DePalma’s much-maligned masterpiece deserves a reevaluation. But first, let’s also explore why controversial movies seem to offend people more than real-life crimes.

In 1952, the U.S. Supreme Court ruled that films were a significant medium for the “communication of ideas.” But with this win for freedom of speech, the Court also ruled that films could be used to communicate the ideas of evil and immorality, and therefore, film censorship in many forms continued to thrive largely through a fear campaign until the 1990s. If the Supreme Court was progressive enough to rule that films were indeed a viable communication of ideas, then what was also the simultaneous reason for also stating that films could also communicate evil ideas? This dichotomy forms the nexus of what film censorship is and always will be. One cannot explicitly say that certain films should never be censored, but when we look at certain examples of how films have been able to influence graphic crimes, not to mention the influence that can be gathered upon the impressionable, it becomes far too exclusionary and ideological to simply plant one’s feet and never budge from their belief that films should never be censored. Free speech rulings would also require a desire on the part of the film industry to make the most of its newfound freedom to the ‘mature and responsible’ cinema it had promised for so long. To me, I think this is the most important aspect of what can be achieved through this communication of ideas, but only if the industry that controls the medium has the courage to allow the medium to thrive within the freedom of speech and freedom of expression without the fear of economic pushback. What one may perceive as obscene is likely not going to be obscene to every individual viewer that watches a so-called obscene film, and I think the creation of the MPAA went a long way in trying to find a way to remove censorship and allow viewers to make their own decisions based upon advisory ratings.

All in all, film censorship, always benefits some sectors of society, and economics also plays a large role in the decision to censor films since film studios fear the economic losses that could come with certain sectors of society boycotting a film they wish to be censored. The concept of films that explore the history and all its era-specific problems is also interesting to ponder. Can Quentin Tarantino be given a pass for using a racial slur to excess in a film like Django Unchained (2012)? In some ways, yes, he can, and this falls into the wider realm of film theory that is centered largely on Post-Modernism and how artistic work can present ugly truths from the past or even in contemporary society due to their evidential existence within the past or within contemporary sectors of society. Films can be problematic based on immediate reactions, especially films that present truths that are now considered to be uncomfortable or problematic based upon immediate reactionary responses. Rather or not these films deserve to be censored, that is an ongoing debate since the beginning of the film.

What Can Dressed to Kill Tell Us About Cinematic Controversy?

One of the long-running controversies in American cinema is the objectification of women and the senseless violence leveled against female characters in late-20th century cinema, particularly in Brian DePalma’s Dressed to Kill (1980). Having seen the film, and a subsequent DePalma film that was also problematic in this area, Body Double (1984), I can readily understand the feminist protests based solely on the optics presented by the film–but visual optics in storytelling does not immediately negate the fact that violence against regularly occurs–it did then, it does now. Charles Lyons writes, “recent studies have tended to construe censorship as an act performed by official institutions or dominant social groups.” Although I vehemently oppose film censorship, I readily understand the concerns raised by minority groups. Optics are a powerful thing in cinema, and it’s not easy for those angered or offended to judge a work of art based on its supposed cinema verite qualities–that is, to show reality through the prism of filmic artistry. I cannot say that I found Dressed to Kill to be woefully offensive; but I can easily say that DePalma’s style and framing is an easy target for feminists or LGBT activists to become offended–regardless of if the story in question could in fact logically happen. The truth of the matter is that minority groups do unfortunately become targets for psychopaths just as common as they become targets for ignorant bigots; as a gay man, I can testify to the latter many times over. The plot of the film is also not outside of the realm of possibility, even though those of us in minority groups frequently call for the legitimacy and purity of our identities, we cannot also disassociate from the fact that trans people, just like women, are also prone to the same flaws and fallacies that define our species as a whole–regardless of learned environmental and societal traits.

A transwoman or woman can just as easily be a psychopath as a member of the Ku Klux Klan can also be. There are also many that find misogynistic undertones in the roots of the word pornography. I cannot disagree more. Pornography does not automatically translate to automatic objectification and violence towards women. Sexual gratification is not a trait that we can all rise above solely based on the fact that we have advanced brains for animals–it is a primal release of passion and sexual arousal. In the 70s and 80s, Steinem did have some valid points since there was indeed porn that solely focused on women in submissive roles–there still is for that matter–and the objectification of the male form, let alone readily available same-sex pornography, was indeed lacking. But regardless of the debate on eroticism from the time, Dressed to Kill is not a film that falls in the category of pornography or sexual violence; simply because it depicts women and transwomen in a flawed light, does not mean that the film itself is misogynistic or transphobic. All too often, both those who call for censorship and those who argue against it are fighting a lost cause in the sphere of objective fact and pragmatic definitions of the essential truth of an act; much like politics, censorship can be debated as a pro and against to infinity and beyond, but somewhere in the back and forth lies a kernel of truth; and that truth is that film censorship is an act to escape human fallacies in the face of righteous opinions.

There is an endless debate that defines the human experience–the debate between right and wrong, good and evil; why can’t we all just admit that human beings are equal parts ugly and equal parts virtuous and sincere? We are all the yin and the yang; the grey–not the black and white. Those who call for film censorship have every right to be offended–but film is an art form, and to say that art must be righteous and pigeonholed in one class of virtue or ideological opinion is to diminish the very purpose of art. Concern over media effects has not only thoroughly problematized adult spectatorship but also, as I hope to show, led to an increasing subjectification of film regulation. What happens when the populace all falls into line wherever the ideological wind blows? The answer is that we all, most of us that is, fall into line with the majority push. The problem is that cinema is still to this day defined by economics and capitalist opportunism–even in the indie sphere. I am not trying to say that people do not have the right to be offended, but why not open up a conversation about what is seen in a so-called problematic film and how the problem in question permeates throughout our world? Studios and those who hold the purse strings regularly cave to whatever opinion engulfs the majority—i.e., the majority that will then translate to ticket sales. There are endless amounts of laws and acts passed to address media effects on people, yet no matter how many laws and acts are passed, violence still permeates throughout societies. For me, film censorship is a step in the wrong direction because it then merely exposes the inefficiency of biased politics rooted in equally biased and misdirected causes for action that are frequently cited by those who call for film censorship.