Home
Entertainment
What Would Billy Crystal Have Been Like as Buzz Lightyear? 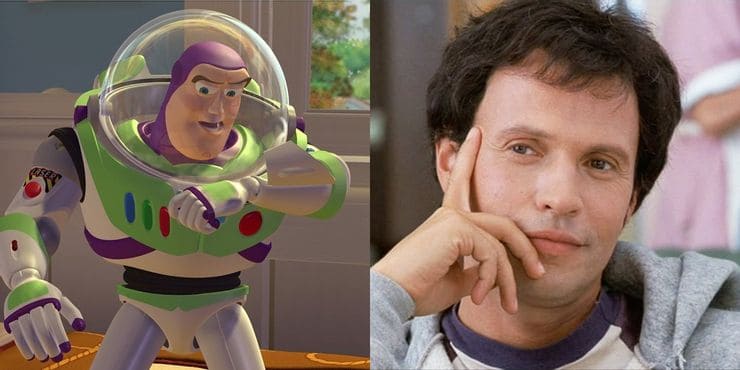 It’s amazing to think what could have been when it comes to show business, especially when it comes down to wondering what a character might have been like if they were portrayed by someone else or, in this case, voiced by someone else. Trying to imagine anyone else playing Buzz Lightyear at this time is kind of tough, isn’t it? Tim Allen created such a memorable character that it’s hard to even think of what Buzz would have been like if he would have been given someone else’s voice. Plus, had he been given the voice of Billy Crystal it feels as though he might not have been quite as popular since like it or not, Crystal does have the type of voice that one would expect of a slightly neurotic and very nervy, almost anxious-looking character. It’s true that the character of Mike from Monster’s Inc. could have gone a lot of different ways, but Crystal’s voice lent the little green blob with arms and legs the kind of behavior and attitude that he needed to get by.

Tim Allen’s voice is a lot more along the lines of what people might have expected from a puffed-up, slightly egocentric character like Buzz since being built to be a tough and intrepid space ranger, Buzz was the kind of character that needed a voice that was a little deeper and could make him appear ‘manly’ in a way that resonates with a deep voice and lots of confidence. After watching so many of Billy Crystal’s movies he tends to play a lot of characters that are constantly questioning, doubting, and might have serious doubts about their own character or at the very least, anxiety that is bubbling just beneath the surface. Buzz had none of that, and if he did have insecurities, which the audience found out that he did have through the course of several movies, he hid them away far better than any character that Crystal has ever portrayed.

Had Crystal managed to get the part of Buzz it’s fair to say that he would have put up a good performance since there’s nothing to say that he’s no good at what he does, especially since he’s been one of the best actors and comedians around for so long. It just feels like it wouldn’t have been a good fit for the most part, since Crystal is the type of actor that one might expect to voice a character that’s fearless in their own way but still has a lot of personal issues to deal with. His voice is so distinctive that trying to fit it into one’s thought process is kind of difficult when looking at Buzz. It’s easier to think that Crystal could have played the part of Woody than Buzz, and even then that’s a bit of a stretch since Tom Hanks made that possible. The fact is that Billy Crystal is a great actor and voice actor, but he definitely only works for certain characters just like anyone else. Imagine Tom Hanks as Buzz, or anyone else in the movie taking over. For one reason or another, Tim Allen was the perfect voice for this character since he brought the machismo and the slightly arrogant tone that was needed, and at which Allen can excel with such ease.

Had Billy Crystal been given the role of Buzz it’s likely that he would have had to act way out of character and become someone that people aren’t used to hearing since the stone-cold fact is that if Buzz had been anyone else, he might not have worked quite as well as a character. Anyone wanting to dispute this might need to take a long hard look at the various characters that Pixar has been so helpful in creating over the years and realize that pairing them with the right voice actors isn’t just a stroke of luck, it’s also due to the casting process that brings to life the many options that could be used for one character or another. It would have been fun to see Billy Crystal portray an important character in the Toy Story movies, but it certainly wouldn’t have been great to see him as Buzz Lightyear for the simple fact that Crystal doesn’t have the right type of voice.

He’s a comedian, and a very good one, and while it’s not a matter of ‘staying in his lane’ it is a matter of knowing what a person is good at and what is a little beyond their comfort zone, in this case too far beyond. It’s been fun to hear Crystal’s voice in the movies over the years and there’s nothing to take away from him or not getting the part of Buzz since it’s likely that even he realized that he wasn’t the right actor.