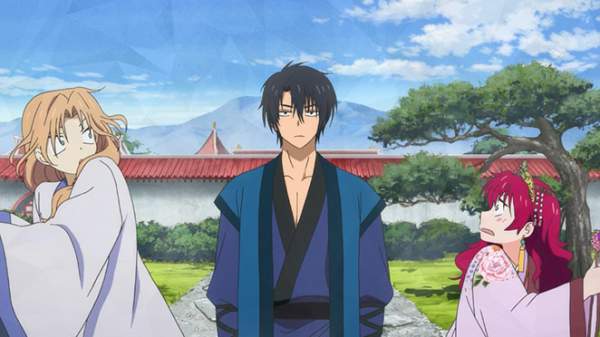 Yona of the Dawn started out as a manga aimed at teenage girls in August of 2009. Since then, it has seen the release of 35 volumes over the course of more than a decade, which is an impressive number by any reasonable standard of comparison. Naturally, Yona of the Dawn received an animated adaptation consisting of 24 episodes plus three OVAs, which were released from 2014 to 2016. Regardless, those who are curious should have no problem guessing that the protagonist is a girl named Yona. To be exact, she is the princess of a country called Kouka, which claims to have been founded by a god in a time of great turmoil. Said deity was the Crimson Dragon God, who became the Crimson Dragon King by incarnating as a human. Initially, he struggled against the evil humans of his era. However, he was joined by four other Dragon Gods, who became the four Dragon Warriors by incarnating as humans as well. As a result, the Crimson Dragon King was able to found the country of Kouka before dying, with the result that the four Dragon Warriors went their separate ways. Over time, this caused Kouka to become home to five tribes – Sky, Earth, Fire, Water, and Wind.

In the “present” of the setting, Yona is a member of the Sky Tribe that rules the country of Kouka as a whole. However, she lives a very sheltered life as the sole daughter of the pacifistic King Il, with the result that she knows nothing about life beyond the palace walls. This would be bad enough on its own considering her place in the line of succession. It is even worse because the country of Kouka has deteriorated, so much so that it is sitting on the verge of destruction. Still, it isn’t something external that brings about the end of Yona’s idyllic existence. Instead, it is her beloved cousin Su-Won who executes a coup d’etat on her 16th birthday, causing her to lose her home, her father, her throne, and her beloved in a single moment. Unsurprisingly, Yona is devastated even though she manages to make it out with the assistance of her bodyguard Hak. Eventually, she sets out to save her country by following the myth of the Crimson Dragon King and his four Dragon Warriors.

Will We See a Season 2 of Yona of the Dawn?

The first issue to consider when examining whether a particular anime will get a continuation or not would be whether there is enough source material to support it or not. This isn’t an issue for original works. However, the same can’t be said for adapted works with linear narratives, which is a descriptor that definitely fits Yona of the Dawn. Having said that, this is a non-issue in this particular case. Yes, the first season of Yona of the Dawn used up volumes one to eight, while the three OVAs covered volume 18. As mentioned earlier, that still leaves more than 20 volumes, which should be more than enough source material to support a second season. There are some animated adaptations that go through volumes at a rapid pace, but there are limits to what is and isn’t possible even for them in this regard.

In any case, anime gets made based on whether the benefits will outweigh the costs. This doesn’t necessarily mean that an anime has to be profitable on its own for it to get subsequent seasons. Instead, it is possible for an anime to be considered worthwhile because of its effect on the rest of the franchise. In other words, an anime doesn’t need to be good enough as a product for it to get a continuation, it can also be good enough as a marketing tool for it to get a continuation.

Unfortunately, it doesn’t seem as though Yona of the Dawn can meet either criteria. Never mind meeting both of them for the best chances of seeing a continuation. First, its sales for the individual volumes of the anime were in the low thousands. That isn’t particularly terrible by anime standards because anime is notoriously expensive in its homeland. However, that isn’t exactly what anyone would consider impressive either, which doesn’t bode well for the anime’s commercial potential on its own. Second, it is hard to see how a continuation of the anime could bolster the rest of the franchise. The manga is still selling, but there has been a clear decline in its popularity over time. As a result, it seems unlikely that the relevant parties would seek to revive its fortunes by throwing money after an uncertain gambit at best.

This is particularly true because Yona of the Dawn doesn’t seem to have any other components that would benefit from such a move. Sure, there apparently have been a single novel as well as a number of minor collaborations over time. Unfortunately, there has been a notable lack of other merchandise, meaning that there isn’t much to gain from another push for the series. Theoretically, it is possible that Yona of the Dawn will get another season at some point in the future. Strange things have been known to happen in the anime industry from time to time, particularly since the public doesn’t have the insight needed to sort the truly strange from the seemingly strange. However, interested individuals shouldn’t get their hopes up because it is looking like no such thing will ever happen.

What Do We Know about a Hypothetical Season 2 of Yona of the Dawn?

If a hypothetical Season 2 of Yona of the Dawn is ever made, it would presumably see a reunion of the cast members because that kind of thing matters a great deal to the intended audience. In contrast, the crew members could see some significant changes, both because of the normal turnover in the anime industry and because crew members just aren’t as visible as cast members. Otherwise, there isn’t much point to speculating further on the issue, seeing as how the best bet is that a hypothetical Season 2 will remain as that and nothing more.