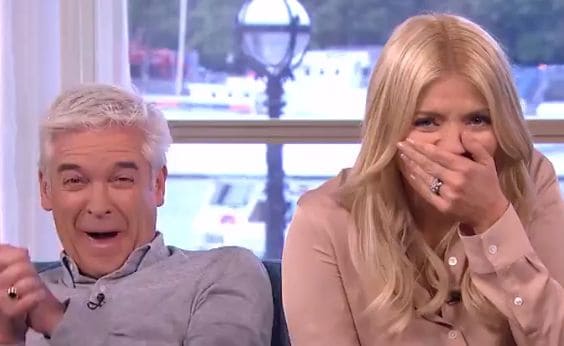 There are times when it doesn’t take much to make people laugh. Unfortunately it does tend to come at the expense of another person a lot of times, but at least in this instance it’s not so much the name they’re making fun of as the reaction to it when it causes Holly Willoughby and Phillip Schofield to break out in hysterical laughter. You have to admit though, the name of the weatherman they’re trying to pronounce tends to leave itself open for a lot of different reactions. Laughter is just one of them but it’s one of the best thankfully.

In truth it’s not so much the name as the effect it has on Holly’s words after she speaks it. She actually flubs the next few words out of her mouth after speaking the weatherman’s last name, Schafernaker, and then just can’t hold it together any longer. To be honest it’s nice to see talk show hosts loosen up a bit sometimes. It’s nice to know that they make mistakes and are able to just bust up now and again because something strikes them as funny. And it’s even better when that something funny is something genuinely amusing.

Some surnames tend to leave themselves open to a lot of abuse and in some cases just sound funny enough that once you say it you can’t get it out of your head that easily. Look at Holly throughout this clip, just the thought of having to say it again makes her crack up as Phillip can just barely keep it together for breaking down at her reaction. It’s at least a good bit of sport since the two of them are cracking up, though it must have taken a good number of takes to get it right if they kept doing this.

But that’s the fun of doing shows such as this. You get to have fun and just shrug off the otherwise awkward and uncertain moments because they’re not done in anything but fun and the laughter that comes isn’t meant to be harmful in any way. I would hope that the weatherman whose name caused such gales of laughter would have just as good a sense of humor and would join in if he’d been there at that moment. After all if you can’t laugh at yourself then life’s gotten way too serious and you should try to reevaluate your position.

There’s nothing wrong with this but I do hope she got it right eventually without doing anything other than smirking. Perhaps she could get through one take without busting up, just long enough for the camera to turn off so that she and Phillip could enjoy another gale of laughter at the verbal mishap as Holly collapses onto the sofa again in a gale of laughter punctuated by the occasional snort that can be heard during the clip. Now that’s when you know something struck your funny bone just right, that telltale snort that comes from laughing so hard.