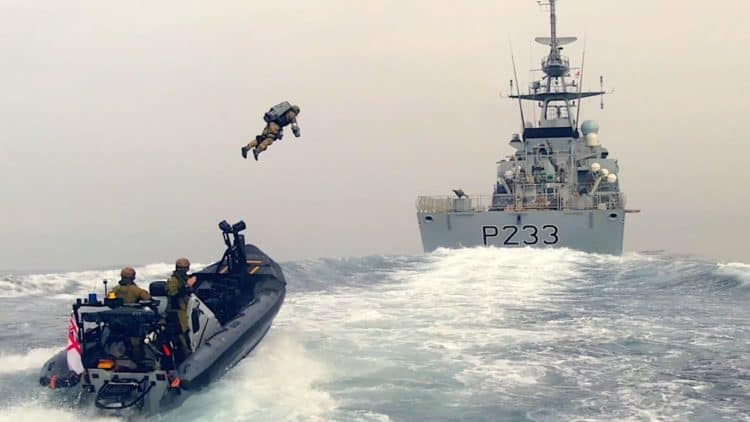 It’s very easy to wonder if we’re looking at the future at this point since the gravity pack that these Royal Marines are wearing to board a ship looks like something right of a TV show or movie and even better, they work. Before anyone gets too giddy about seeing if they take a ride on one of these packs though, keep in mind that they cost around $440,000 apiece, which means that unless you’re a marine working on the project or someone that has enough money to make pretty much anything happen with a certain donation to the right person, it’s not going to happen. Perhaps one day when something like this is commonplace, if any such thing ever happens, it might be easy to see people zipping through the air with their own pack that they at the local dealership, or wherever these things might be marketed. Until then it’s likely that the average person couldn’t afford even the smallest part of the contraption. Well, maybe they could, but the fact remains that the jet packs are still insanely expensive as one might guess when it comes to anything used by the military. It looks pretty cool, to say the least, though and it’s something that a lot of people would love to have a chance to try, but it’s likely that it’s not as easy as it might look. The propulsion, the steering, all of it has to be kind of tricky to work with, and there’s not much doubt that there’s a good deal of training that goes into this operation before they head for open water to test it out. It’s not a good thing to talk about since some might think it would cause bad luck, but if something did happen it does feel as though the wearer and the pack would sink like a stone unless there’s something built in that would allow the wearer to remain buoyant. That’s kind of hard to see, but unless a person knows anything about it then it’s likely wise to not worry too much and assume that the marines have it sorted out.

This is about as close as things get to giving people an Iron Man propulsion system at the moment, but there are likely plenty of people that are currently working on systems such as this and are doing everything they can to come up with something that might cut down the size and keep the power while increasing the maneuverability. It’s something that might be worth thinking about at least, but it’s not bound to happen as it has in the comics or in the movies since not only does the power source that is used in the movies not exist in real life, but the fact is that the technology, advanced as it is, only moves so quickly, and it’s fair to say that things haven’t progressed that far just yet. Right now a jet pack is still a big and cumbersome thing that does the job and makes landing on a ship from a boat possible, but the technology is still something that isn’t quite as intimidating as an Iron Man would be since it does appear that the operator’s hands have to be busy with the contraption the entire time, meaning there’s no offensive capability to the packs at this time, at least not in any traditional sense. It’s not wise to count out that possibility probably, but for now, it would appear that the jet packs being created and used aren’t going to be adding any munitions to them, likely due to the added weight and what would happen, or perhaps because it’s not supposed to be a weapon of war. Who knows?

What does look apparent is that this could help with boarding a ship that’s been taken by terrorists, which is something that could be a worthwhile application since in some parts of the world there are still plenty of threats on the sea, which could make this bit of tech quite useful. It doesn’t sound as though it’s that stealthy, however, and unless it’s used at night and in the presence of other noises it’s likely that the operator would be a sitting duck if they were found out. In a way, this looks as if it was a presentation that was meant to make sure that the pack worked and little else since any real military applications are likely still being worked on given that as just mentioned, leaving an operator as a sitting target doesn’t sound ideal, but trying to put more ‘oomph’ into the pack in terms of offensive or defensive capabilities is bound to take a while. Maybe one of these days we’ll see something akin to an Iron Man suit, but for now, this is what’s there.