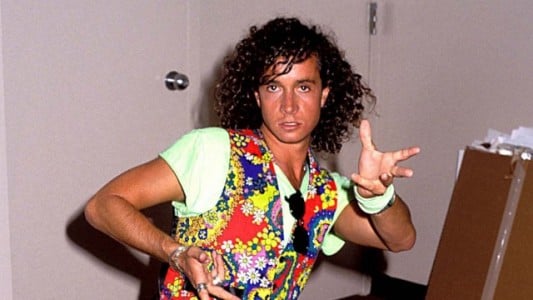 Pauly Shore is the kind of actor that people really need to like or tolerate since otherwise he gets old pretty quick and his acting gets a bit dated since he never really appeared to grow out of the Encino Man and Son In Law days. He’s tried to move on, that much is evident, and his take on a few classic scenes from classic movies is kind of amusing, but it does feel as though he just hasn’t grown up yet and is still trying to bank on humor that is coming back around thanks to nostalgia. His most recent movie, Guest House, is doing fairly well apparently, but one has to wonder just what Pauly has in store for the long-term since he’s not getting any younger and his comedy hasn’t really changed much in all this time. He did make it a point to state that he’s not trying to imitate the actors that made the classic lines famous, but maybe it might be a little better if he did since to be fair, his acting has been kind of an up and down affair over the years and it’s easy to state that he’s kind of like a guitar that needs to be tuned up with every use since otherwise, he comes off sounding kind of kooky.

This isn’t to state that Pauly Shore isn’t a decent actor, since he’s been a lot of fun to watch over the years, but the fact is that a lot of actors do eventually mature over the course of their careers, since that’s what it usually takes to stay on top or at least remain relevant in some way. Pauly hasn’t really done that since he’s kept up the same act throughout the majority of his career and it hasn’t really developed or evolved into anything other than the stoner with a less crusty mop on top. The fact that he hasn’t moved forward by now is a good indication that he won’t in the years to come since if he hasn’t managed to overcome the characters he played back in the 90s when his fame was really rising, it’s easy to assume that whatever he does will have shades of these old acts in them since like it or not, Pauly Shore is a comedic actor that is kind of one-note and hasn’t taken on another dimension yet. He’s fun to watch, there’s no doubt about that, but after each performance, it’s clear that he doesn’t want to be known for anything other than his comedic chops since the guy has made it clear that he has one speed, and that’s his.

There are people that would gladly congratulate him for staying true to his own act for so long, but it does feel that he could at least attempt to branch out and try something else and attempt to stretch his drama muscles a bit more since it could be that he’s missing out on a lot of roles that might allow him to become known for more than just being the funny guy. In a way, Pauly is the guy that a friend keeps around because he’s a lot of fun, but who refuses to grow up and is determined to be as wild and crazy as he can be throughout the course of his life no matter what anyone thinks. There’s a certain allure to that really, so long as life is bound to be taken care of and all the important things that grown-ups need to learn are capable of being seen to. In fact, some folk would no doubt love to live this kind of life, and while it’s great to think that Pauly might be living this kind of life, it’s also easy to think that he’s had to take plenty of responsibility over the years since as a comedian he’s better as an actor, since having seen him on a mic a couple of times he’s definitely not the same caliber as many other comedians that are attempting to make their way forward in the business. It’s not a great idea to state that someone should stick to one thing in their career, but Pauly should stick to movies since it’s where he shines the brightest as of now.

Just to make it clear, he’s not doing impersonations in these clips, he’s taking on the lines and the scenes in his own voice with his own acting. If people are excited about that just give it a minute and those that are excited might see the reason why it’s best for Pauly to stick to movies at this time. He’s not a legendary actor, unfortunately, but he is an amusing comedic actor, and if he plays to his strengths then he’s funny. Otherwise, it’s kind of cringe-worthy to watch.