Home
Television
How You Can Watch “Married with Children” Online 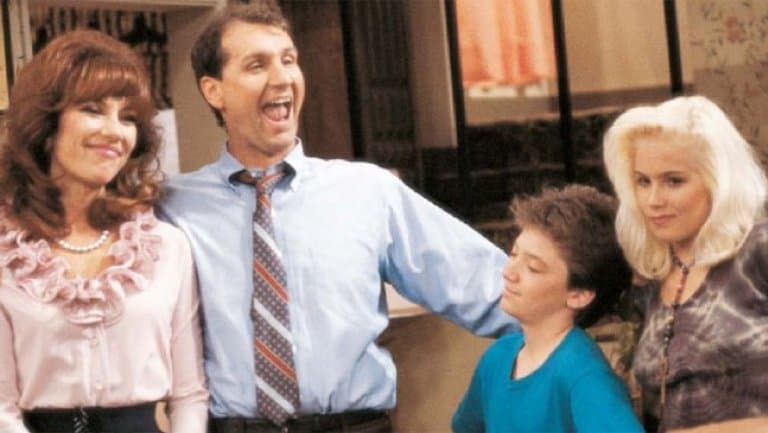 Before we go into the more mundane details about how you can watch “Married with Children” online, a couple of questions require answering. The first is, how can a sitcom that is more than 30 years old continue to be popular, getting an 8.1 IMDB rating? The second is, how does Ed O’Neill, a paunchy, balding man, manage to get paired with two beauties that are separated by three decades?

The answer to the first question is that “Married with Children” was way ahead of its time. At the time it was first released, it aired on Fox, a channel that wasn’t even available in some states. That meant the show wasn’t going to be winning any Emmys, and also that many potential viewers never even got the chance to chime in on its political incorrectness. Which leaves another question — how does it continue to get all the attention in 2018.

As for the paunchy, balding man, we don’t get it either.

Now on to the more important topic of how you can see this show, which also features an eye catching Christina Applegate, online. You have a lot of choices to watch any of its 11 seasons, starting with Hulu. One of the good things about it being available on Hulu is because it is only 11 seasons you can grab the 7 day free trial and binge watch it for free. Or if you don’t believe us on how good the show really is, you can watch a couple of episodes and decide for yourself.

Then there is iTunes, which lets you either watch or download it for the standard price of $0.99. Other than the Hulu free trial, it is the cheapest of the online alternatives we found. Of course, those of you who loathe all things Apple can continue reading to find another way.

VUDU is another solid choice, though their price jumps up to $1.99. One of the things that prevents making VUDU a highly recommended option is that if you download it, and we know from experience there are definitely some you will want to download, that you can only view on VUDU’s own player. No mp4 or other format conversion is allowed. That sounds a lot like Apple, no?

Then there is Amazon, which means if you are one of those who doesn’t mind paying 20 percent more for their new 1 year subscription price for Amazon Prime, you can rent it for $0.99 per episode, $1.99 to buy. That also sounds a lot like iTunes pricing, but with Amazon Prime you get all the other benefits, so that makes it worth it, right?

Microsoft Xbox has the same options as the others with the same pricing, and PlayStation has only 3 of the 11 seasons available to watch. We’re not sure that the younger generation is interested in these very politically incorrect comedy episodes, so only 3 seasons actually makes some sense.

You can catch the episodes if you are a very early riser on TNT (which can also be streamed) on the standard cable network lineups.

We’ve seen some episodes roaming around on websites like Vimeo, but they are few and far between — and we don’t know if the Copyright Police have caught up with them yet. But if it is free you are looking for or if you just want to check out what all the fuss is about you can browse around Vimeo.

So there are your main choices for either online viewing or downloading, one episode at a time. You might want to view some clips on YouTube, but we checked out YouTube Red and didn’t find anything available at this time.

If you are of the politically correct type, especially if you are offended by jokes focused on fat people or sexist jokes, avoid “Married with Children” at all costs. It is a show from the late 80’s, a time when the era of political correctness was just getting started. But overall, it really spares no one, whether you were a high school jock who ended up selling shoes (Al Bundy), a 1970’s party girl who thought marrying a jock was a ticket to fame and fortune (Peggy Bundy), or a teenager trying to find their way in a sexually promiscuous culture living in the big city (Chicago) who have 2 not-too-bright parents (siblings Bud and Kelly Bundy).

You have been duly notified.