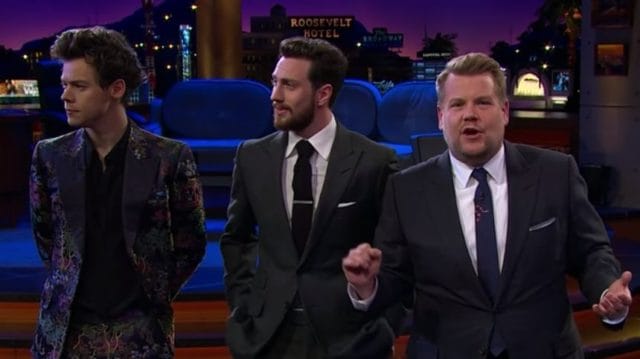 I have to say when it comes to boy bands and pretty much any kind of music that I know my 17-year-old niece listens to, I ignore all of it.  I couldn’t tell you about any One Direction songs if my life depended on it.  But I will say this much.  From what I’ve seen in the last few weeks out of Harry Styles I’ve liked.  He’s taken to his solo career like a pro and the fact that he landed a part over 1000 other people auditioning for Dunkirk was impressive to me.

He did great on SNL the other week and you can tell this guy is a very big sport about any kind of parody.   Styles took his new solo career to The Late Late Show last night and James Corden included Styles in a game called “Flinch.” The 23-year-old singer-songwriter kicked off his week long residency on CBS’ The Late Late Show Monday, joining The Wall’s Aaron Taylor-Johnson on James Corden’s couch. After announcing a new Carpool Karaoke airing this Thursday, the time came for them to play a very messy game.

“My guests appear very cool on the surface, but we’re going to test their steely nerves in the game that we call Flinch. Now, the game is simple. If you look over here, you will see my face, and my face will be spitting various forms of fruit and produce,” Corden told viewers. “Your job is to stand behind that glass and not flinch when I spit at you. However, we have added an extra layer to this game. Since Harry, Aaron and myself are all sons of England, we have decided to put our British resolve to the test. During this round of Flinch, we’ll be trying to maintain a stiff upper lip while enjoying a spot of tea. Whoever spills the least amount of tea is the winner.”