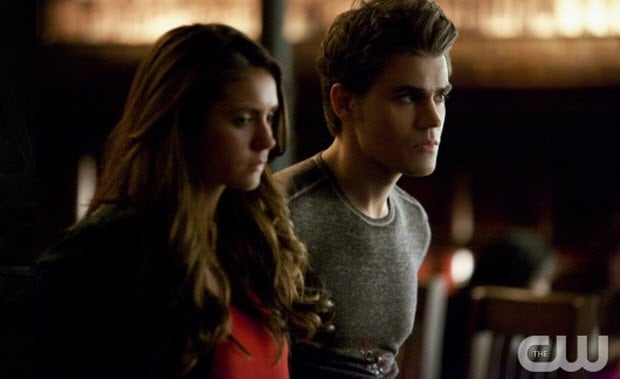 Overall this was a frustrating episode in an already shaky season.  The Vampire Diaries is known for its complex storylines, but something about this season just feels tired to me.  Yes, we learned of the Travelers’ true agenda but even that is still a bit confusing.  Flashbacks to the past fill in more of Enzo’s story (which was long overdue) but it all led up to a pointless secret by the end.

The timing was finally right to address Enzo’s search for Maggie.  He was only involved with the Travelers so that they would help him find his lost love, and he’s devastated to find out that she was viciously murdered in Mystic Falls 54 years ago.  The picture of the crime scene shows that her head was ripped clean off so of course Enzo confronts the only Ripper he’s known — Stefan.  Viewers know that even in his Ripper days, Stefan didn’t leave his victims in such a mess.  He would tear their heads off, but he’d have the morbid decency to arrange them with their head back in place after the deed was done.

This only leaves the other Salvatore brother to blame.  When Damon learns of Enzo’s hostage situation threatening both Stefan and Elena’s lives, he enlists Sheriff Forbes’ help to locate the file for Maggie’s murder.  The pictures jog his memory and he has no other choice but to tell his friend that he was responsible for Maggie’s death, even though he didn’t know who she was at the time.

Enzo’s spent years in captivity as an Augustine vampire so it’s likely to assume that Damon is possibly his only friend.  He can’t bear to deal with this shocking news, and instead flips his humanity switch off with the blink of an eye.  Just like that, he’s gone from bad to worse.

Stefan and Enzo have a showdown on the strangely deserted college campus.  Stefan’s got a hand on Enzo’s heart and as he was about to let him go, Enzo willingly pulled away from Stefan just so that he would have to explain to his dear brother that he killed his best friend.  This is where I started having issues.  First of all, Stefan and Damon are technically even now.  Damon killed Stefan’s best friend Lexi in season 1, now Stefan is responsible for Enzo’s death.  That pettiness aside though, I really think it’s so stupid for Stefan not to just tell Damon the truth right off the bat.  He sends Damon a text from Enzo’s phone so that he thinks he’s leaving town for good, but I have to wonder, wouldn’t Damon understand that under the circumstances this was the only way to stop Enzo?  With his humanity switch off, he was dangerous to Damon and anyone else he loves.  Now they showed him as a ghost, swearing he’s going to get revenge on the whole lot of them.  As much as I was starting to like Enzo, I don’t want to see him as the new enemy.

Bonnie was briefly involved in Enzo’s hostage situation at the college diner where Liv happened to have been blackmailed to help Enzo.  It was nice to see Bonnie and Liv finally be honest with each other now.  Bonnie knows what Liv’s up to, and Liv advises Bonnie that she should start saying her goodbyes now because with the Other Side crumbling down, who knows how much longer she has left.

Tyler’s been M.I.A. from his bachelor pad with Matt and Jeremy, but with the help of Damon, they all come to the conclusion that Tyler must be hijacked by a Passenger.  His scenes with Markos and the other Travelers were pretty cool at least.  Markos’ grand plan is to use the doppelganger blood to essentially cure all vampires in Mystic Falls of their vampirism.  Actually he emphasized it as more of ridding the magic from vampires, which makes it sound like less of a blessing than that much sought-after cure was last season.  We all saw how that turned out for Katherine, who aged quickly after receiving the cure.  Whoever gets lucky enough to become the Travelers’ victim(s) with this new spell probably won’t be long for this world either.  Oh, and did I mention that Markos noted that they’ll need a lot more of the doppelganger blood to complete this mission?  Not a good sign for Stefan and Elena, but definitely predictable.

Rumor has it that there’ll be plenty of deaths to occur before the end of the season.  Since this is the Vampire Diaries, death doesn’t always stick.  Bonnie and Jeremy are living proof of that.  I know that we’ll still see more of Enzo for the rest of the season as he tries to enact his revenge on Damon for killing Maggie, but I wonder if he’ll also make a grand return to the living next.  In an interview with Zap2it, Caroline Dries hinted that there are (at least?) 3 permanent deaths coming.  Let’s start taking bets now.  I feel guilty about thinking that Bonnie and Tyler will possibly (and unfortunately) be among that body count but those 2 at least make the most sense to me.  What do you think?