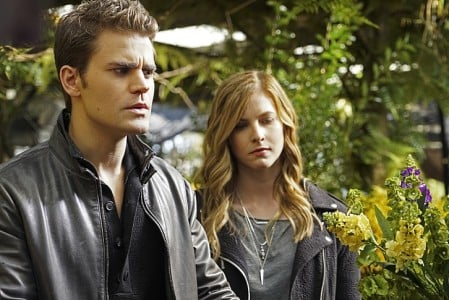 Without a doubt, this has been the strangest season of The Vampire Diaries. Everyone’s changing so much and nothing makes sense anymore. I never in my wildest dreams would have thought Damon would do what he did tonight. My Team Salvatore and Bamon heart is broken.

First of all, poor Stefan! Seriously this guy can’t catch a break with these linking spells. He was finally unlinked from Klaus last week only to discover the phoenix sword mark links his life to Rayna’s. I’m glad to see there was more to Rayna’s story revealed, even if the Armory still seems super shady. At least Bonnie got the heads up in time about that pesky linking problem before Damon let Rayna die her last death. As I thought when we first saw how she became a hunter, she only has 8 lives to live. It’s a miracle she’s lasted this long and somehow still manages to survive at least another 3 years.

I really feel so bad for Stefan right now. On top of the pressing Rayna matter and not being able to find any more of the herb Freya recommended to cover his mark, he’s losing his home and his brother. Not to mention his girlfriend (more on Caroline in a bit!) Basically losing his friend Matt Donovan too, since he’s kicking him out of Mystic Falls. Like I said, I don’t know what’s gotten into everyone. Matt’s taking a stand against vampires but when that includes his friends, he’s easily persuaded by a pretty girl who doesn’t know anything about his history with vampires and magic. Matt strolling into his home, telling Stefan he needs to leave by tomorrow, was literally the last thing Stefan needed to hear. Damon had just walked away from his brother at a time when he needs him the most. Stefan needs help and no one cares! Well, Valerie cares at least.

By the time the show sped up in the last five minutes to recap all we know about the storylines 3 years later, I don’t know how Stefan can still be so naive when it comes to Damon. Rayna has Stefan tied up and offers to transfer the hunter’s mark onto Damon instead and all Stefan can do is scoff at her trying to pin them against each other. Surprise, surprise. It was Damon’s idea all along. Why? Because he has a death wish, obviously.

I’m so conflicted about Damon’s decision to just take himself out of the equation now when there’s a deadly Huntress after his brother. That’s unforgivable to walk away from him and voluntarily dessicate in a coffin next to your comatose girlfriend’s coffin until they can be together again. Damon’s goodbye letter to Alaric made me a little mad too. He wants to sound so romantic and heartbroken that he’s known love before and he can’t bear to go another day without her. Come on, dude. I thought family meant something, especially when you’ve stuck with your brother for this long. Elena will still be waiting for you as long as you’re alive when Bonnie dies.

Bonnie’s goodbye scene with Damon was pretty much everything I needed to hear and more. She deserved better than a written apology, and I can’t believe Damon is so selfish he’d still choose to go through with his plan after witnessing Bonnie’s tears. She already lost Elena and in the process became best friends with Damon. Now she’s realistically never going to see either of them again. It’s no wonder she ends up in a mental institution if Enzo is her only closest friend now.

Caroline and Bonnie have drifted so far apart, I can’t remember the last time they had a scene to themselves. Caroline’s so infatuated with Alaric’s babies and all that comes with them that I highly doubt she ever returns to Mystic Falls in the 3 year time jump. By the looks of her and Ric settling into parenthood in Dallas now when the babies are still newborns, she’s not going anywhere. Stefan knows that, and he’s probably always been afraid of this happening since he learned of her pregnancy. The worst part is she doesn’t have the slightest clue the emotional and mental toll all of this has on Stefan. She claims she’s got “kind of a war zone over here” as if taking care of twin babies is such an unprecedented horror or something. Whatever, Car.

If you’re keeping track, I’m disappointed in and sympathetic for all the characters at this point. Damon and Caroline certainly have a lot to make up for when the show returns after a few weeks hiatus on April 1st. Until then, share your thoughts on the episode here!

The Vampire Diaries Season 7 Episode 15 Review: “I Would For You”

Damon makes a decision that impacts everyone, especially Stefan.