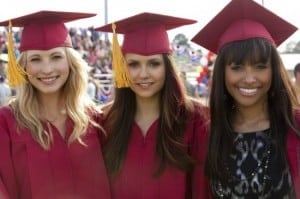 One Mystic Falls resident did take the cure in the season finale of The Vampire Diaries, but it’s not the one you would have expected. Here’s the rundown on the big moments of the finale.

More ghosts appeared in tonight’s episode, including Connor, Alexander and Vaughn. The ghosts decided to divide and conquer, with Connor contacting Elena, Alexander holding Rebekah and Matt hostage and Vaughn shooting Damon with a wooden bullet laced with werewolf venom. Their unified goal was to get their hands on Silas and the cure. But instead of turning it over, Damon offered it to Elena, who refused to take it at the expense of other people dying. When she learned that Damon could die from the venom, she and Jeremy proposed that he take the cure since Klaus was too far away to heal him. Instead, Damon led Vaughn on a stalling wild goose chase for Silas’s body.

Meanwhile, Bonnie was still reeling from her recent death, but she couldn’t bring herslef to tell her friends the truth, even with her grandmother warning her that she needed to say goodbye. Instead, she prepared to meet Caroline for graduation (and brushed off Katherine’s threats to kill Elena if Bonnie didn’t come through with her immorality promise). Back at Alexander’s new trailer, Rebekah managed to get Matt off a pressure-sensitive explosive her ex-boyfriend had rigged and ordered him to head to graduation. Then she stepped off and walked through the blast.

At the high school, Bonnie, Matt, Elena and Caroline gathered for graduation. As Bonnie enjoyed a bittersweet ceremony, Kol decided to crash the party to tell her to keep the veil down permanently so that he and his friends (who had infiltrated the ceremony) could continue to live. Bonnie confessed her ghostly state to Kol but also managed to trap him in an invisible box until she could do the spell. Out by the lake, Vaughn continued to shoot Damon when he realized Damon was stalling and demanded to know Silas’ location. Fortunately, Alaric arrived in the nick of time and dispatched Vaughn and stole back the cure. As Caroline tried to frantically reach Klaus, he arrived in dramatic fashion and fully cured Damon.

Back at the Salvatore mansion, Elena handed Stefan the cure and insisted that he take it. Back at the school, Klaus gave Caroline a terrific graduation gift: allowing Tyler to return to Mystic Falls. There was some good for Delena fans as Elena freely confessed her love to Damon. Later that night, Stefan headed off to bury Silas’ body and told Damon that he wasn’t thrilled about his relationship with Elena, but he also wasn’t “not happy”. Jeremy reunited with Bonnie as she prepared to close the veil, while Alaric said his goodbyes to Damon. In the car, Lexi told Stefan that it was time to leave Mystic Falls and start living his life.

When Elena went to find Bonnie and Jeremy she encountered Katherine. Meanwhile, Bonnie did a spell that brought Jeremy back to life and he was thrilled, but he realized that she had become a ghost. She told him to lie to Caroline and Elena for the summer about her whereabouts so they could be happy and then she walked off to join her grandmother. At the Lockwood mansion, Matt accepted Rebekah’s proposal for them to travel together over the summer.

In the school, Katherine and Elena fought fiercely. Katherine was furious about Elena “stealing” her happiness. Katherine managed to get Elena on the ground and stabbed her in the neck as we flashed back to Elena giving Stefan the cure. It turns out that Stefan refused the cure and just before Katherine killed Elena, Elena shoved the cure down Katherine’s throat. Out at the quarry, Silas took Elena’s form to speak to Stefan and spilled the beans about Bonnie’s death. He also delivered a shocking piece of news: he created a doppelgÃ¤nger with the immortality spell. In other words: Stefan is Silas’ doppelgÃ¤nger. Silas stabbed Stefan, locked him in the giant safe and threw his body into the quarry.

The Vampire Diaries has already been renewed for a fifth season and should return in October. For more information about The CW’s 2013-2014 schedule, click here.

Emma’s full review of the season finale will be up tomorrow. Meanwhile, check our Vampire Diaries page over the summer for news about the upcoming season.