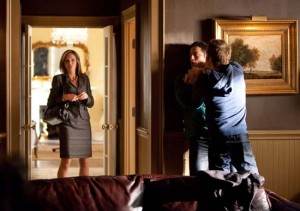 It’s on! We found out this week in great style what it’s like when vampires fight werewolves when there isn’t a full moon, so can you imagine when there is one?

Trust was a big theme this week with Tyler confronting Caroline over the truth about Mason, Stefan and Damon. There is confusion between these two, who are so new to their supernatural status that the idea of vampires and werewolves being enemies is not encoded in them. It is understandable why Caroline is upset by this confrontation considering how much Caroline has been there for Tyler during his transformation which put her at risk. Tyler’s actions to some extent can be forgiven considering the information Jules is feeding him, but that doesn’t mean I’ll be happy with what he does later.

What is clear regarding Caroline is that she really trusts Stefan who she believes can sort out how Tyler is feeling, a hard task considering his brother did kill Mason. Regarding this conversation between Stefan and Tyler has every character on this show now called Tyler a dick at some point? What this talk leads to is Jules showing how fearless she is against vampires even without a full moon and we are introduced to her love interest and werewolf partner in crime Brady, who take matters in to their own hands and capture Caroline. What follows are some particularly horrifying torture scenes of Caroline who takes mace like vervain spray to the face, a wooden bullet to the head (which she has to dig out herself), a water pistol full of vervain to the face, many more wooden bullets and a dart gun full of wooden splinters.

In the exchange of Caroline for Tyler in the woods, Jules and Brady seem out matched by Stefan and Damon but then they pull the classic reveal of many more wolves all bearing fancy vampire killing devices (maybe Alaric should come and get these for his collection). This is followed by an epic fight where Damon pulls his super special heart ripping move and Stefan utilizes the weapons against them in to weapons for them. The moment that will cause the heartbreak later is how Tyler hesitates to help Caroline out of her cage and then does nothing when it seems that team vamp is defeated. The secret weapon of Dr Martin using his witch brain aneurysm power really got our guys out of a bind and showed that Elijah will keep his end of the deal (still can’t be trusted though).

Caroline, understandably, is more than upset with Tyler, but I can’t help but think that her closing the door on him will do more harm even if he really deserves it, especially as he reveals to Jules about the dreaded moonstone. Candice Accola once again was incredible, through the torture, pretending to Stefan that all is OK and her confrontation with Tyler. I love her relationship with Stefan, he doesn’t try to push her in to talking but he knows that what she really needs is her two best friends who will help ease her pain and, I look forward to more from these two as there is no complication of a potential hook up.

The other major threads of the episode concerned Damon and how he is handling everything after his meltdown and what the presence of John means and if he can be trusted. Of course John can’t really be trusted as the final scene shows that he is working on a way to get to get Katherine out of the tomb. Why he is trying to get the vampire that tried to kill him out beats me but I am sure there is more to this than meets the eye. The thing that amuses me about John’s return is how everyone reacts with such disdain when they see that he is back, no one likes the guy and he knows it.

Damon continues to have his crisis but is trying his best to pretend that all is fine offering up snappy one liners such as my personal favorite to Stefan about getting “a hero hairdo of my own”. He has found a new female play thing in reporter Andie who he shares the much talked about bath scene which turns from hot to icky as her blood mixes with the soapy water. Seeing how things have previously gone with reporters in this town I can’t see this ending well.

Lines have been drawn and allegiances have been set, this episode really does enforce the divide between vampires and werewolves. All talk of Klaus is on the back burner but simmering away and Damon is teetering on the edge, which makes me more than excited as to what is to come. A really stellar episode that featured all the main cast and some exceptional performances setting a major plot point of fire. A

What did you all think? Glad to see the vampire vs werewolves battle upon us? Enjoy the Damon bath tub scene? Want to go have a slumber party with Caroline, Elena and Bonnie? Let us know in the comments below or in our TVD forum. Also be sure to check out the always excellent Mark O. Estes full recap here. 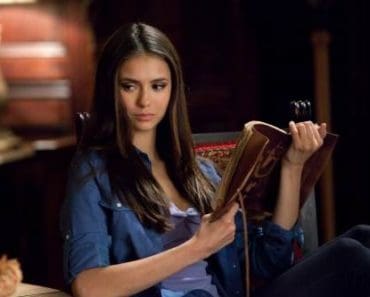 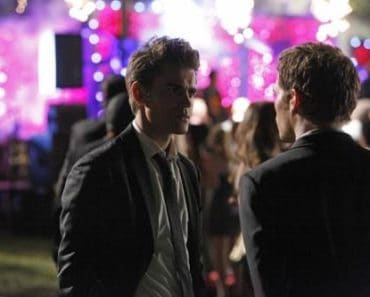 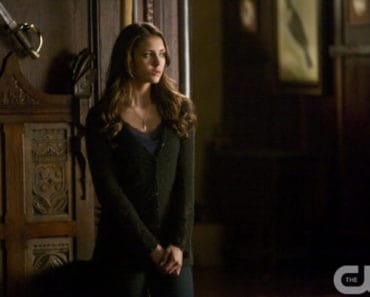 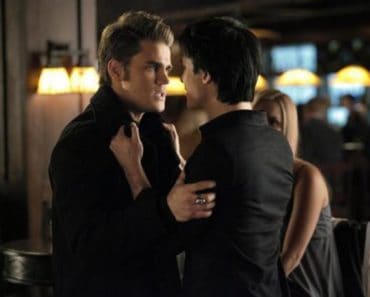