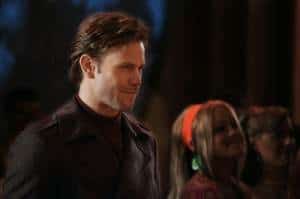 After being forewarned what a humdinger of an episode this was by fellow TVD recapper Mark in his wonderful preview the other day and via Twitter, I was still completely thrown by the emotional roller coaster that just took place in “The Last Dance”. After the duplicity of last week and the declaration of full disclosure at the start of the hour, there were just as many tricks and turns that you would expect from this show.

The key reason for the deception was that the secret weapon of Bonnie that they toasted merrily last week was soon discovered by Klaus who is currently inhabiting Alaric’s body (more on that later). To convince Klaus that Bonnie was indeed dead they had to put on a performance to prove this and the only way for this to be possible would be to keep the number of people who knew the plan limited. Stefan proved when he learnt of what Bonnie’s powers could do he really can’t always keep his mouth shut when it comes to the people that Elena cares about. In the moment he would not want to see Elena go throw the pain of thinking that her best friend had sacrificed herself to save her so the thought process behind this seems logical, though I do think they have underestimated his resolve. Whilst I wasn’t completely convinced that Bonnie was dead the pure devastation etched on Elena’s face fooled me for a minute.

The fundamental difference between Stefan and Damon here is that Damon will sacrifice any one to save Elena, and whilst I’m sure Stefan in the end would do the same, there might be an element of hesitation that might cost them. I think though after the contentious discussion between the brothers after this that Stefan might change his tactics and this conflict will become all the more apparent as they both try and save the girl that they love.

Once again there was the debate asking whether it is a noble act to knowingly sacrifice yourself for the ones you love, this time Elena was on the side trying to stop the actions of Bonnie. I appreciated Jeremy’s attempts to stop Bonnie, stooping as low as reminding her that all the women he is involved with ending up dead, whilst this could be considered emotional blackmail I’m happy to see that he is aware that there is a pattern to his relationships. This is kind of an expected pattern unfortunately when the town you live in has so many supernatural beings in it but yeah he must be feeling pretty cursed right about now.

The actual dance, despite all the peril had fun and light moments. First up praise must be given to the set design folks who did a stellar job on giving the hall a 60s vibe, right down to the VW Camper van. The amount of swapping between dance partners as they scoped out the hall for Klaus was also fun showing that so many of the characters have chemistry with each other and not just the ones who are romantically linked. The dance that most anticipated from the promos was between Elena and Damon and whilst that was all kinds of cute and flirty, the one that had just as much chemistry was between Bonnie and Damon. Now before any one gets angry at me I don’t think the Damon/Bonnie thing will ever happen but the actors do work well together. Even though Damon will chose Elena over any one (even Stefan?), he dealt with the Bonnie death plan with a level of care and consideration that we witnessed with Rose. Damon this season is showing moments of humanity cracking through his exterior of not giving a crap.

Fans of Stefan and Caroline were given a dance moment to allow Stefan to fill Caroline in on the Klaus issue and to further heighten the idea of secrets and lies between herself and Matt. These scenes are now rather sad between Matt and Caroline considering he knows everything and she is blissfully unaware that her boyfriend and mother are conspiring together. This story is heading for tragedy, not just because of the foreshadowing of their costumes at the dance but because I fear that they will become collateral damage when Klaus really makes his move. At this point I know it’s futile to make this plea but I would really like Caroline to survive the season as she has been a revelation this year.

Speaking of Klaus, it was so good to see Matt Davis get to do so much more tonight and his reaction to the decade dance was appropriately dismissive for someone who has lived as long as he has. Like Stefan last year who when asked about the 50s remembered a lot of the bad stuff of the decade that is now seen as rather whimsical, Klaus displayed a level of contempt to this time period (except for The Beatles of course). It is also not surprising that for someone that has lived this long that he would get some of his history mixed up as he did in class with Watergate, though this really should have raised a red flag as to Alaric not behaving like himself. It is still unclear what will happen to Alaric when Klaus is finished with his body, though he can just get a new one if this one dies so all does not look well for our Mr Saltzman.

After being put through the wringer Elena ends the episode doing something that could be considered impulsive, no not venturing in to Damon’s bedroom but heading downstairs and releasing the dagger from Elijah’s heart. This action is perhaps their best hope and is one that I can understand why she didn’t consult the Salvatore’s, as I’m sure they would not be able to see the logic at first. Klaus clearly doesn’t want Elijah any where near this which means that he will be useful, it also means that Bonnie will not have to sacrifice herself to save the day. One quick question though, if Elena now owns the house and Elijah is already inside does he need to be invited in again?

A spectacular week which shows just a little of what Klaus can do and how high the stakes (no pun intended) are for all involved. A

What did you all think? Which dance partnership was your favourite? Think Elena is brave or foolish for releasing the dagger? Did you think Bonnie was really dead? Let us know in the comments below or join us in the forums.

Join us next week for flashback fun and fisticuffs between brothers.