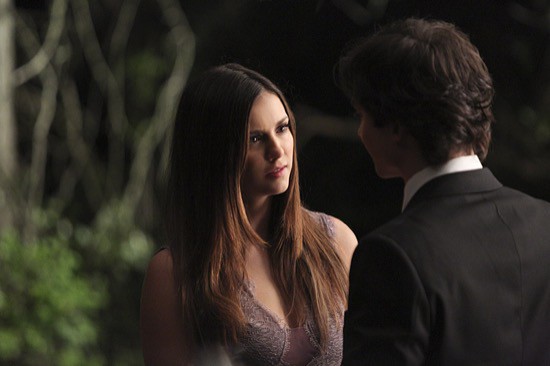 With eerie dream-like sequences of Elena and various characters saying goodbye interspersed throughout the episode, it was clear her exit from The Vampire Diaries would be permanent.  But was it really?  In actuality, the plot twist was a disappointment to some viewers, myself included, because as usual, nothing is permanent.

Basically, Elena is gone on a technicality.  She’s almost literally put on ice for a future time whenever it’s convenient for a surprise guest appearance, or at least for the series finale.  I can already picture the series finale ending with her opening her coffin and greeting Damon to live the rest of her human life with him.  Unless of course the ratings require her to come back sooner than later, either through a magic loophole or a brief mental visit much like her goodbye scenes.  We need to talk about the very ability to do that.  It’s been a well-known practice of these vampires to use this mental trick to give dying friends pleasant memories before they pass.  Since Elena’s just laying in a magical coma for the rest of Bonnie’s natural life, why can’t anyone pop in and pay her a visit once in a while?  Out of everyone, Damon would be most likely to want to talk with her when he misses her most.  It’s unlikely she’ll have a sense of time in the unconscious state of time she’s in, so I’m sure she would love to get frequent updates from her friends about their lives.  Of course, this is all based on Nina’s availability and for now we’re supposed to accept this as her official sendoff.  I’ll take it, but I don’t love it.

Besides this new link between Elena and Bonnie’s lives thanks to Kai’s spell, there was so much else going on.  It was arguably the bloodiest episode/season finale yet.  The Gemini coven is dead, including Jo and Liv.  About Liv, though, she sacrificed herself as she already lay dying so that Tyler would trigger his curse and heal from his otherwise deadly wounds.  A part of me wished he would have just accepted his death as a human instead of becoming a wolf again; now he’s another character who may or may not make appearances when the story absolutely calls for his presence.  It better be a very good excuse when they call Tyler back to town, because he really has nothing else going for him there.

Stefan and Caroline continued their dance around their obvious feelings for each other.  In the end, they’re not any closer to being a couple, but then again, no one’s really feeling romantic after saying goodbye/”see you later” to a longtime friend.  Stefan cleared up any lingering doubt in Caroline’s mind about his feelings for Elena, and in the process, reassured the viewers of the true importance of their epic love story.  They did and still do love each other, but it’s strictly platonic.  It was beautifully poetic to actually hear that Elena reminded Stefan of the good in his brother Damon, which reignited their own brotherly love after decades of being apart.  #TeamSalvatore!

Out of all of Elena’s goodbye scenes, the saddest ones were with fellow humans: Bonnie, Alaric, Matt, and even Jeremy.  Because for all of them, this quite possibly is a final goodbye.  They’re all being optimistic here assuming Bonnie will live a long and prosperous life, but in Mystic Falls, we all know that’s rarely the case.  In the best case scenario, though, there will be no more supernatural dramas killing innocents, and everyone will live happily ever after.  The truly bittersweet part is Elena and Bonnie won’t get to live their lives together so that feather scene was a very sweet callback to Season 1.  It struck me as odd that Elena only told Tyler to get out of Mystic Falls.  Ideally, she would be looking out for everyone she loves and want them all to go somewhere far away to start over like Jeremy.  Her general theme was wishing for all of them to live their lives and be happy without her.  Only the fellow vampires (Stefan/Damon/Caroline) will almost definitely see her again, but never say never.  All it takes is one stake or one fast grab at a heart to end even a vampire’s life.  In that sense, it’s slightly more satisfyingly sad to think that this could be the last time anyone sees Elena, because no one ever knows what the future has in store for us.

Speaking of the future, we got a glimpse of a time jump in the very last minute.  It only showed a desolate and destroyed looking town square as Matt drove through in a cop car.  That’s about the only positive thing by the looks of this future, that at least Matt is alive and living his dream.  Damon is seen standing on the clock above the square and that’s all we got!

In an exclusive interview with Buzzfeed, Julie Plec did say that “next season plays with time jumps a little bit. We’re going to have some fun with living in flash forwards and also in the present.”  Hmmm, I like the sound of that!  It makes me miss Lost and those flash forward/flash-sideways worlds.

What did you think about the finale and Season 6 as a whole?  What do you expect or hope to see in Season 7?