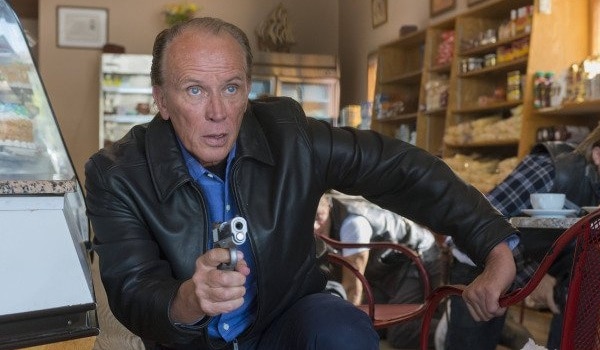 There’s precisely one reason why it would be difficult to talk about Peter Weller as a villain and that’s because he played as one of the greatest heroes of an era, Robocop. But if you take that role away you get a particularly nasty villain character that’s entirely believable since in a few ways he’s just flat out nasty. As Charles Barosky on Sons of Anarchy he’s the affable type of bad guy that plays a role in his community and and is more or less the guy you can look to when you’ve got a problem to solve.  As it’s listed on Fandom he’s also an ex-cop that runs a gang of corrupt cops, which makes him even more dangerous since he’s not just a part of the community, but he knows how to find out just about anything about anyone with a phone call. Despite that he comes off as a pretty nice guy that takes care of people as he feels the need. But underneath that community-friendly veneer he’s a ruthless thug that would put a bullet in someone if it made sense for business or was absolutely necessary. His death scene in this show was kind of satisfying since in the end it seems that he was more harm to the club and to Jax than he was worth, and Jax put a bullet in his head to make sure his debt was paid.

If you thought he was bad on Sons of Anarchy however that’s kind of laughable since that’s Weller as an older man and well past his prime. Back in the day, meaning the 80s, he took on some roles that got especially nasty since in Firstborn he was one of the worst types that you could possibly imagine. Sam was the kind of guy that thought only about himself and his bad habits and would gladly drag anyone and everyone down with him, even a mother who had some serious issues of her own. His character could be very ingratiating so as to get people on his side, but otherwise he was one of the worst villains you could ask for since he was the type that lied to your face and stabbed you in the back with a smile. It’s pretty obvious that RogerEbert.com didn’t think this was a great movie since the review was less than positive, but the essence of Weller’s villainous side made it pretty obvious that he can go full rogue if he has to for a movie.

On top of being just aggressive and altogether dirty he can also play a villain that’s intelligent and insidious as well. There might not be a lot of people that remember The Order but it was a very little-known movie back in the early 2000s that had some potential but never got off the ground. As Cardinal Driscoll, Weller was a powerful and very influential man, but his hidden identity as the Black Pope created a very devious nature to his character that didn’t make a lot of sense until near the end when you finally got to figure out the endgame and why things had been progressing as they did. This was Heath Ledger’s movie without a doubt but Weller played the type of character that was a mastermind in his own right but still was bound by certain rules that even he couldn’t break. Of course when Heath’s character finally became the dreaded Sin Eater and Driscoll was in need of his services to die a clean and sin-free death so that he might ascend to heaven, the most satisfying part was when Driscoll had his own sins shoved back down his throat so that he could perish in the most painful way possible. Yeah, that sounds mean and vindictive even towards a fictional character, but it was justified and more to the point it made a better ending to a very forgettable movie.

All in all Weller has been able to play some very vile characters in his life and that’s just a few of them. Throughout his time in show business he’s had the chance to play some great characters and some that are kind of forgettable largely because their arc never really went anywhere or the movie he was in never went anywhere. The one thing he’s always been though is recognizable since he was a big 80s star that a lot of us remember from some of our favorite movies and programs. Seeing him as a villain is kind of difficult at times but it’s also great since he’s able to flip the corner and do good or bad without much trouble.