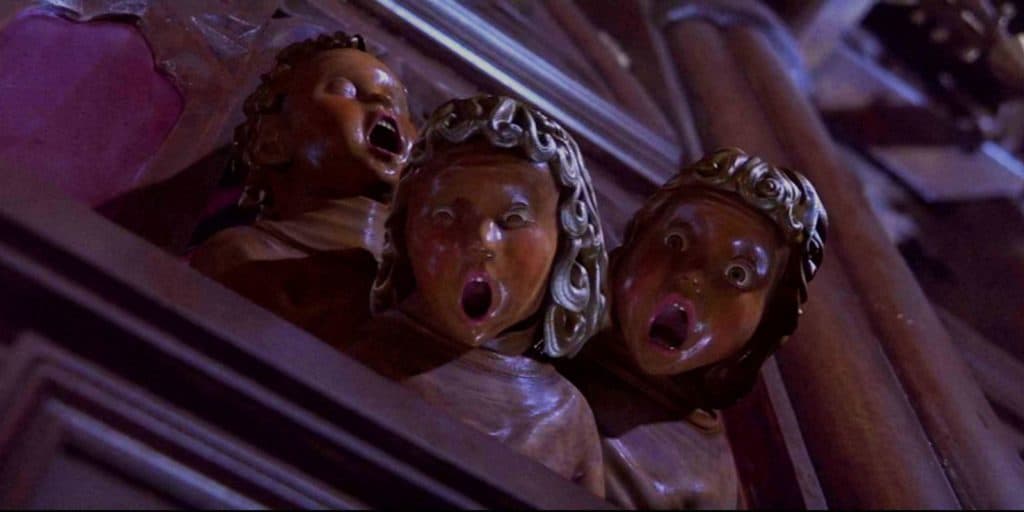 Out of all the horror movies that haven’t really been given a lot of respect, The Haunting is one of those that has been given a great deal of grief for a number of reasons, one of which is because it’s seen as a poor remake of the original that was released in 1963. It’s important to note that some elements were kept the same, but a few were definitely changed to give the remake a darker and definitely more confrontational effect that was bound to lead to a showdown near the end. The original didn’t feature this, which is why it’s confusing to think that a lot of people would prefer it over the remake. But the idea that a confrontation didn’t need to happen in the manner that it did is easy to see, though if one is all about confronting the evil that dwells within the shadows then this movie was done in a very convincing manner. Plus, the whole idea of trapping Hugh Crain, the dominating spirit of the house, in the doors that he had crafted for his own amusement, was ironic and kind of fitting.

There are a lot of moments in this movie that are pretty cheesy since the acting is a bit ‘meh’ and doesn’t really leave a person satisfied since it’s a bit overdone and doesn’t feel like it fits. But that could be said of the original movie as well since this feels like a horror movie that’s trying to dip its metaphorical toes into the pool only to pull them back, or rather, it’s building to the possibility of seeing a truly nightmarish scenario, but it trips and falls and tries to collect itself without really succeeding. The whole angle with the children in this movie was more than a little creepy and definitely had potential, but again, things kind of went off the rails when the carvings of the children began to interact with or around Eleanor. Even if this was supposed to be meaningful, it was creepy beyond belief.

The story of The Haunting was actually quite nice since Eleanor has a definite link to this place that she doesn’t know about and doesn’t realize until later into the movie, but making her way to the home is kind of like a homecoming, though she doesn’t know why. The doctor that is there to study his three test subjects, Eleanor, Theo, and Luke, isn’t exactly a villain, but his methods aren’t exactly ethical since he’s not a believer when it comes to spirits and he’s not exactly forthcoming with his subjects. As things start to happen, such as banging in the halls, cold spots in the house, and various other phenomena, he continues to doubt while the others are at one point or another convinced that the house is reacting to them and that the reactions are getting a lot more disturbing with each encounter. When it comes to the spirit of Hugh Crain almost consuming Eleanor in her bed by keeping her pinned down and manipulating the house in a way that’s bound to create a serious case of PTSD, the lot of those in the house are finally convinced that it might be time to leave, but they don’t ever get the chance to do so since the house won’t let them, or rather, Crain won’t let them.

Eventually, Eleanor discovers the secret of her link to Hugh Crain and that the spirits of the children that Crain abducted in life are looking to her to set them free. The final confrontation is a bit, well, anticlimactic, but it’s still something that could be looked at again and possibly rewritten to make it even better. Overall the movie wasn’t that bad, the only things that would really need to be touched up in the story would be a few more moments of exposition and perhaps a hide and go seek game between Crain and Eleanor that would result in him running full tilt into the doors and being sucked in. The actors would definitely need to be replaced again, but a lot of dialogue could be kept, along with a lot of the story. The whole idea of Eleanor belonging at Hill House without ever knowing why is a great plot point and should be something that could stick around.

But as far as the rest of it, there are moments that are great and some that are kind of so-so since the truth about this movie is that while it does have a great idea, it kind of falters here and there as it attempts to reach each scene and it could use a touch-up. But the overall story that went into the remake was kind of nice since it kept certain elements and changed others to cater to a more modern audience.