Home
Movies
Horror
The Voices: Why You Should Check Out This Underrated Gem 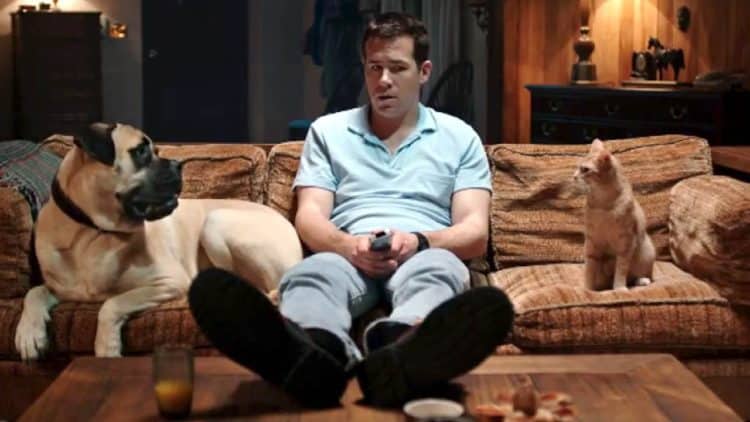 Are you looking for a movie that has talking animals, headless women, and Jesus? Look no further than this independent gem, The Voices. Back when Ryan Reynolds was still stuck in his mediocre comedy phase, the 44-year-old plays a mentally unhinged factory worker who has trouble balancing the sinister advice given by his cat, and the sage wisdom spoken by his dog. The little film also features a talented cast rounded out by Gemma Arterton (Summerland, My Zoe) and Anna Kendrick (A Simple Favor, Up in the Air), who help make this dark comedy land with its off-beat humor. Now, The Voices doesn’t exactly dive deeper into the mental illness that Reynolds has, though this isn’t a character-driven piece that’s meant to give you meaningful insight into schizophrenia; however, it isn’t a mean-spirited film that mocks the mental illness as well.

Reynolds is essentially a dead-pan Deadpool, minus the superhero ability or 4th wall breaking. His charm and comedic timing manage to make Jerry a likable character, despite the fact that he’s a serial killer. Don’t get me wrong, you’re not exactly rooting for Jerry to murder the poor victims; however, the film tackles his mental illness with sensitivity. We as the audience understand the issues that Jerry is dealing with and while we generally feel bad for the people that he murders, it’s the weird humor that keeps the film light and funny. If you end up finding Jerry a deplorable character then that’s okay as he could easily be the villain of some random slasher flick. The Voices doesn’t try to tack on a ton of sympathy to make you like Jerry. It explores enough of his character to make sure you understand him. Jerry is a good guy, just a misguided one who desperately needs to take his medication. His conversations with his evil cat and pure of heart dog are vastly entertaining, though the film isn’t just complete non-sense that relies on death, gore, and off-beat humor to carry it through the one-hour and 43-minute runtime.

However, the dark comedy doesn’t necessarily do any favors for people who have schizophrenia. This is a fiction movie, thus it’s not a commentary of how people with schizophrenia generally act in real life. If you believe that the subjective matter is too sensitive then stay away from the film. At the end of the day, Jerry is a serial killer, and his mental illness is to blame for his heinous crimes. Some people will love it. Some people will hate it. The film does its best to get to the root of Jerry’s issues. One of the best scenes in the film is his talk with his therapist, Dr. Warren (played by Jacki Weaver). Sure, she’s tied up against her will; however, the core of Jerry’s issues are explored here. In some ways, Jerry is like J.D from Heathers. Their actions are deplorable, but both men are lost souls. The loss of his mother – who committed suicide like J.D’s mother – and the torment from his father reveals a damaged man who doesn’t understand how broken he is.

Just like Jojo Rabbit was able to get some comedy out of such a grim subject or Heathers taking the classic teenage romance comedy to murderous heights, its dark comedy stripes shine through and through. Going back to Gemma Arterton’s character, she’s hilarious as Jerry’s love interest/headless talking woman. Yes, that’s a bit of a spoiler; however, the trailer gives away Arterton’s fate and showcases several moments of her talking to Jerry in her headless state. It’s all incredibly weird but makes complete sense in the context of the film and Jerry’s character in general. The comedic timing matches Reynolds and it helps keep the film running at a brisk pace. Not surprisingly, Anna Kendrick does well with the love interest role as well. She’s the purity that Jerry needs in his life and her charisma makes her a winning presence throughout the movie. The film will likely make you cry. The subject matter is still grim thus there are tough moments to get through without a dry eye, though the film doesn’t try to manipulate your emotions. If you love Ryan Reynold’s brand of humor, The Voices should definitely be after to your watch list. There’s a deep meaning behind the murder and mayhem, and the indie dark comedy does an effective job of blending the humor and dramatic moments together.