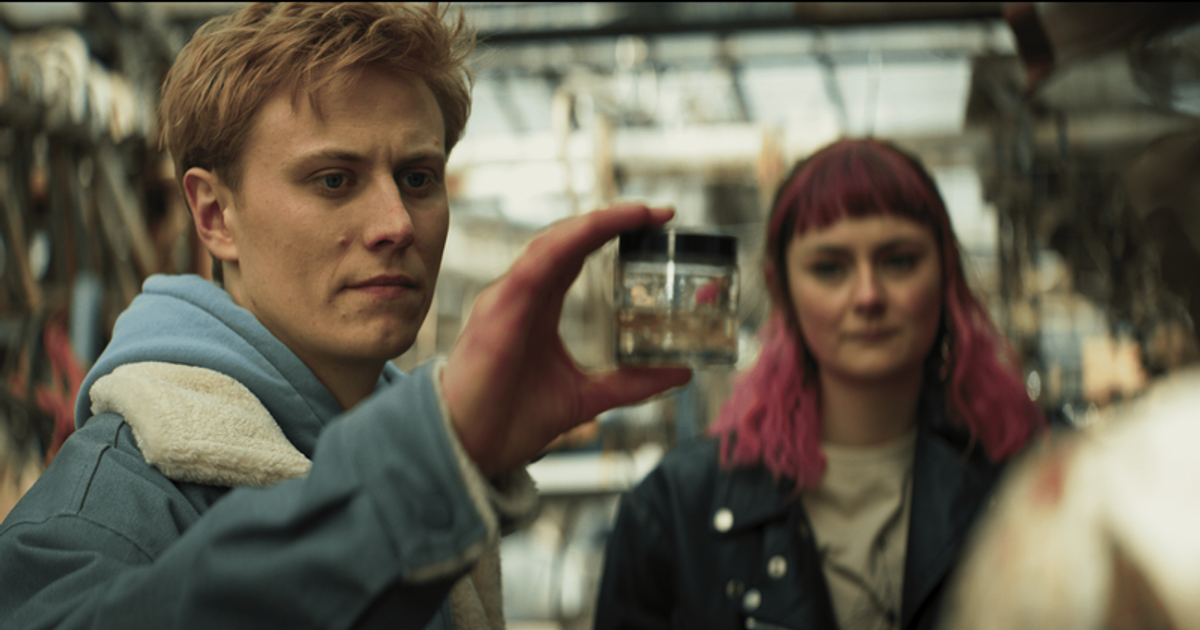 Calling this movie strange and unusual would be just the start since, upon getting further into it, one can’t help but think that this is a good idea that was taken a little too slowly to be insanely scary and had an ending that was kind of predictable but also interesting at the same time. The beginning makes one realize that there is something weird going on and that it is highly supernatural, but when Finn and his older sister Anna are left home while their parents attend a function, Finn hears Anna being attacked by something or someone before Sophie escapes, telling him that they have to leave.

What they both see upon leaving, or right before, is kind of creepy in a very effective way, but it needs to be said that Sophie’s death doesn’t make a lot of sense unless one is paying attention and is bound to watch the rest of the movie. If that’s the case, then the movie does manage to deliver on the strange promise that’s made when Finn wakes from what amounts to a bad memory and is shown to be undergoing testing to see how he’s faring. From there, the movie starts to get kind of weird, but in a good way. There’s no reason to trust anyone in this movie.

That might sound a little harsh, but the trouble that begins when Finn is a kid and his sister dies makes it easy to assume that something is amiss and his parents don’t fully understand what is going on, or they’re in on it, and Sophie’s death was a horrible accident/setback. It’s tough to accept that Finn’s parents are entirely innocent since his mother especially apparently brushes Finn off whenever he appears to be having an issue with the past creeping into his life. The fact that his twin sister, Sophie, stands firmly with his parents when it comes to the troubles that arise makes one think that something is going on that doesn’t involve Finn somehow. But when the scene comes along in which Sophie is being prepped apparently for something that involves an elderly woman, a doctor, and their parents, Finn has to wonder what he’s not being told or if he’s going crazy.

Any movie where kids are being used in some nefarious way will tend to gaslight those who suspect anything.

What do kids know, right? They don’t know what they’re seeing, and when they have past issues that might interfere with their daily lives, it could be that they’re easier to manipulate, which appears to be the theme in this movie since Finn can’t catch a break after a while when it comes to his parents and his sister siding against him. When he finds a strange, root-like item in the pills, he takes it. However, he begins to understand that something really wrong is going on. This is only affirmed when he finds out that the root is something that tends to grow on dead bodies, which is pretty gross since anything that comes from a dead body is usually something that people should stay away from. The fact that his sister and many other kids that they attend private school with are taking the pills only makes things worse, especially when one of their peers, a rather arrogant kid known as Leander, is seen pulling something from his mouth that resembles the thing that Finn finds in his pills. The only thing about Leander’s is that the thing has grown and has had a serious effect on him, as Leander ends up committing suicide by jumping off of one of the school roofs.

The creatures that are trying to convert everyone still aren’t clear about what they are.

They’re ancient, that’s kind of obvious, but apart from being made up of ashy smoke and being able to materialize as dark spirits, it’s kind of uncertain what these things are, other than the fact that they’re malevolent and are fully ready to take over humanity if they get the chance. The idea that they’re being transferred through the pills that are being manufactured is pretty devious, not to mention smart, since it would ensure widespread distribution. Other than that, however, it’s kind of tough to tell what they are and if domination is what they’re all about.

It’s a fun idea, but it needs a little work.

This story isn’t that bad, it simply feels as though it could have been reworked a bit to create something a little more solid and perhaps even a little more interesting. The type of story that sees a dark force overtaking humanity is kind of common, but there are a lot of ways to do it even if the general idea is something that’s been done a million and one times.