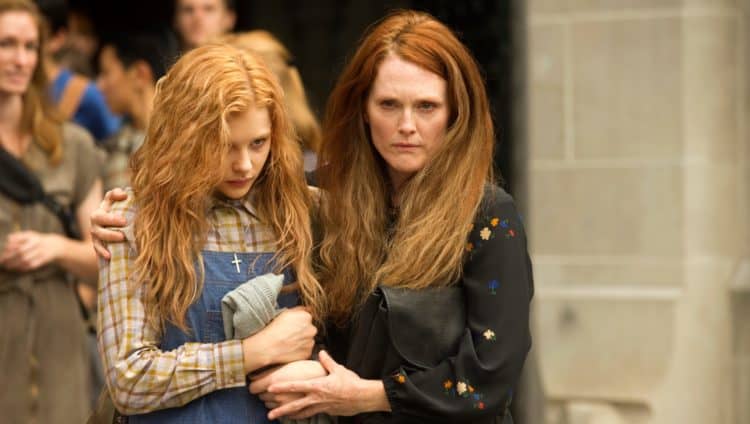 There are some truths out there that one will never be able to convince people of, and the idea that the 2013 version of Carrie was actually better than people have said it was is probably going to remain as one of them for the foreseeable future. The reviews and the fan response to this movie were horrible for one reason or another, and it’s kind of odd to see considering that the effects received a huge upgrade and the movie itself told essentially the same story in an updated fashion. But it’s strange how much people will grouse about a remake that doesn’t follow the original story that well, but will vilify a movie such as this that follows the movie almost perfectly but omits certain points that either didn’t make sense or are a bit outdated at this point. Hey, people are going to like what they want, that’s a fact, but making it sound as though the Carrie remake was a steaming pile of garbage was kind of an odd choice made by a lot of people, and making it sound as though the problem was that it followed the story too closely was even stranger.

It’s a remake, so to be honest, that’s kind of the point. The movie also fixed a couple of things that didn’t really add up in the first one, but let’s just say that the first movie will always be a classic, but the 2013 version is owed a big apology by a lot of people for trying to put it behind them. There have been plenty of excuses as to why the movie didn’t work, and a lot of them are fairly ridiculous since the movie was kind of enjoyable and the funny thing is that with other movies, a remake that follows the first version this close would usually be praised since it might be thought that the actors really paid attention to the original and recreated in a respectful way.

There’s no doubt that this movie gets bloodier than the original, but it also had the benefit of added effects that could allow the main character to do more and to avoid having to rely entirely on practical effects, which some people still love even if they realize that practice effects are sometimes quite difficult to achieve. The fact that the story is being remade in the image of the first is kind of cool really since it means that the fans didn’t have to worry about anything completely new, as they did with The Rage: Carrie 2, which introduced all-new characters and forced people to adapt to the continuation of the story or to simply ignore it. As you can guess, a lot of people ignored it even though this story was still kind of interesting given that it went into the idea of the man that had managed to get Carrie’s mother and this new girl’s mother pregnant was the reason they turned out the way they did. While the mother in the sequel wasn’t as overly religious as Carrie’s mother was, she still turned out to be a very troubled individual that turned on her daughter near the end.

But to say that this remake was anything but satisfying in a lot of ways is yet one more sign of the fickle nature that fans carry, and I’ll admit that I’ve been the same way about certain movies since, admittedly, it’s hard to deal with something you enjoyed changing in such a big way. But eventually, a person can grow up and realize that they can look past their own bias, or not. In all fairness, some people didn’t really enjoy the movie for their own reasons, and that’s all well and good since trying to force people to like something is kind of creepy and not at all acceptable. But in the same breath, trying to say a story isn’t worth something because it’s following the same story that it’s a remake of is kind of silly. One thing that was kind of nice to see is that the nudity was removed since like it or not, even if some of the young women were of legal age, the original opted to show nudity in what was essentially a high school movie. It didn’t matter how old the ladies really were, it was the implication that we were being shown nudity in a high school setting, which was kind of wrong.

And if you’re about to bring up American Pie, then you’re right to do so since there was a moment in which nudity was the main point. But getting back to Carrie for the moment, the adherence to the same storyline was great since it translated quite well to the modern era, especially when it came to someone making a video of Carrie under duress during the tampon moment. Perhaps the craziest complaint about the movie was that Chloe Grace Moretz was too pretty to be the mousy character of Carrie. Hell, Sissy Spacek was gorgeous when she was young, but no one complained about her.