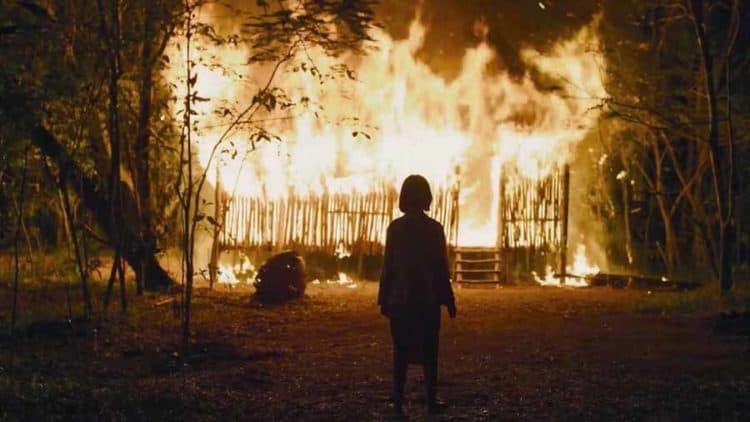 Quite a few people in the USA love foreign-made movies for several reasons and more often than not it’s very easy to see why. There’s often a different feel to them. a different look, and in some cases the folklore might be a little hard for some to understand, but the story still manages to get told in a way that people can grasp. Roh isn’t that much different, the cinematography is fairly well done and the various manner in which much of the scenery is shown gives one a sense that there aren’t a lot of places to go, and that this has more to do with the characters in the story than any sense of geographical isolation. Mak and her two children, Along and Angah, live in a bamboo shack deep in the woods. One day when they’re heading home from foraging in the woods they come upon a strange sight, a deer stuck by its neck in the crook of a tree. Not long after they take note of a dirty, bedraggled little girl that they take to calling Adik, or ‘little sister’.

The girl acts rather odd, and it’s not tough to realize that she’s a big part of the terror that goes on when she tells the family that they’ll be dead by the next full moon, right before killing herself in front of them. Not long after this, an old woman named Tok interacts with the family and notes that the ground in front of their home is littered with rocks. She instructs the kids to get rid of the rocks, and Tok is, as expected, now an element of this story that some might be wary of and others might accept without question. That night, when trying to retrieve something beneath their home, Along sees the specter of Adik and flees. Shortly after she begins to suffer from a fever. Mak goes to Tok for help, and Tok instructs Angah to sacrifice two birds for a ritual that will help, but Angah only sacrifices one bird and lets the other one go.

It does feel as though there’s a great deal of symbolism in this movie, and while it’s not as secretive as it could be or difficult to find, it’s also not as open as one might think. Eventually, a hunter comes looking for Adik, and Mak is immediately mistrustful of the man as she openly threatens him if comes any closer. To make a long story short, the man is Adik’s father and is seeking her out. The general feeling is that the forest is an evil place where spirits roam, and while it might not be entirely accurate, it is revealed by Tok, who is using Adik as a vessel to do her bidding, that the girl is an Iblis, a leader of devils that inhabits human bodies. The hunter slits Angah’s throat and Mak, in turn, stabs the hunter with his own spear, creating a short cycle of vengeance that eventually goes nowhere since Along, who dies after impaling her head on a sharp object in the shack, comes back as she, Adik, and Angah roam the forest as spirits. Along sets fire to the bamboo shack with her dying mother and dead brother inside it, creating another seriously disturbing image to a movie that’s already fairly creepy.

The fact that this movie can be boiled down in such a manner to its main ideas isn’t a negative, but it does highlight how simplistic this movie really is. The belief that many people might be looking for something more in this movie upon watching it is strong considering that there is a lot of open space in the tale and a lot of ‘what ifs’ and other elements that might not be seen but rather implied. A tale such as this has a great deal of potential when it comes to scaring the hell out of the audience, but one has to remember that every director is out to tell a story of their making and that they will usually have a very different perspective than most of the audience, and will be trying to say something that not everyone might pick up on at first.

There is more to Roh without any doubt since the folklore behind it feels a bit simple, but likely hides away a deep-seated belief that is still held by many people within the region where it was filmed, no matter how many might deny it. Stories such as this tend to frighten people in a different way no matter what they claim since it pulls at a visceral set of memories that demand recognition that defies rational thought and the modern ways of life. In other words, Roh is a story that’s best to watch after tossing out any modern-day expectations.