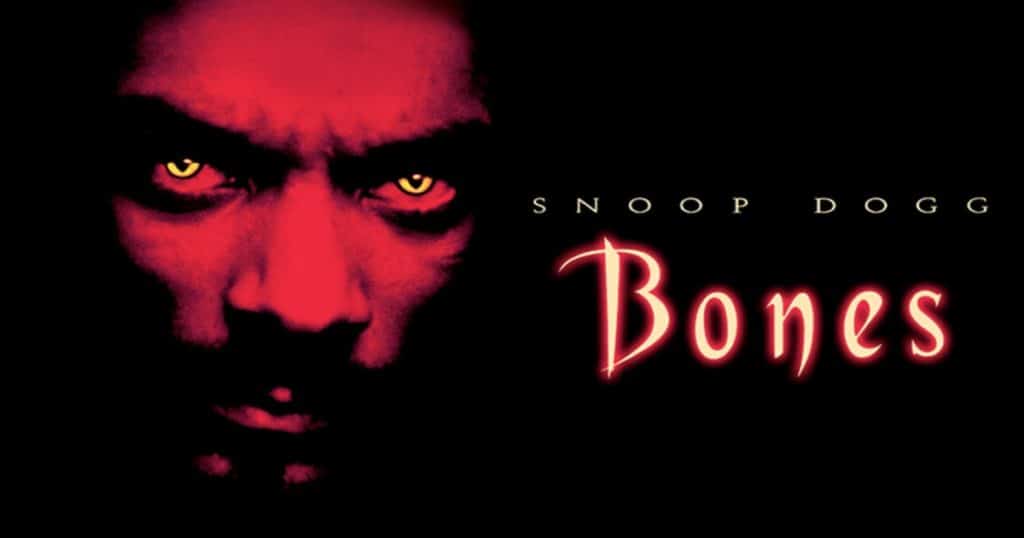 There’s plenty to say about this movie other than the fact that it’s a bit campy and yes, kind of disgusting in some areas. But it’s also a fun look at a horror movie that takes place in a once-thriving neighborhood that was brought down when the man that was looking out for the place was killed. A lot of musical celebrities have turned to acting over the years and quite a few of them have made it clear that they’re not exactly Oscar-winning thespians quite yet, even though some have managed to get that far. Snoop Dogg has been in a number of movies as of now, but one of those that didn’t appear to get a lot of love back in the day when it came out was Bones, which is kind of understandable since back in 2001 things were still changing on the movie scene and this story might have come at the wrong time or could have been eclipsed by something else. Apart from a few hiccups with special effects that could easily be cured in a remake or reboot, Bones was pretty solid.

The tale of Jimmy Bones was that he was the man about town, the guy that everyone looked up to, and a person that did his best to make certain that his people and his neighborhood were left as they were to prosper. It was definitely a movie that showed the upsides and little to nothing of any downsides, but it also made a clear point about the envy that was felt for such a lifestyle. When a new drug was about to hit the streets though, Jimmy wasn’t having it, and the two pushers, one of them a cop, that wanted to start the new business weren’t too happy about Jimmy’s refusal. It came down to Jimmy being forced to smoke a bit of rock and getting fuzzed out of his head, but still getting in one good slash on one of the guys before he was gunned down. To add insult to injury, the two made Jimmy’s friend and his bodyguard stab him with his own knife.

Years later the same friend that ended up moving out of the neighborhood as it descended into a crime-ridden hell had kids that, upon growing up, bought out Jimmy Bones’ old home, which had been abandoned for decades at that point. Obviously, the teens didn’t know any better as they ended up turning the place into a party house. This story was similar to others that have come along throughout the years, but it was also different enough that one couldn’t be blamed for thinking that it had a vibe all its own. Taking a story that is rooted in the reality of what can and has happened to more than a few neighborhoods over time was a nice touch since it gave a very personal feel that some folks might have been able to relate to, but of course, tossing in a load of red paint with chunks in it and a few ridiculous death scenes balanced it out a bit and created a bit of dark humor that might not have felt like it fit.

There were times when it felt as though Bones could have been a horror comedy and then others when it went absolutely dark, meaning that it felt like a movie trying to find its footing now and again. The overall story was great since it’s essentially a haunting that turns into a revenge story that goes overboard in a big way. One thing about vengeful spirits is that a lot of them don’t really know when to stop since they want to take their revenge and then some, perhaps taking out interest on a payback that’s long overdue. The thing is, Jimmy initially went after the people that had done him wrong, but it’s not likely that he would stop there since the revenge killing was bound to keep going so long as he was allowed to exist on the material plane. When the woman he loved sacrificed herself to stop him though, one might have believed that this was enough to stop him and keep his evil contained. There was one little problem with that, however, since she and Jimmy had a daughter, meaning that Jimmy still had a link to the world in a much bigger way.

So yes, Bones was a bit corny and over the top at moments, but when looking at the story it makes a lot of sense and it comes off as something that people might be able to relate to in a few ways given the issues with drugs in a community and the effect they can take. Bones was definitely worth more attention than it’s been given over the years, but at the very least it’s developed a cult following.