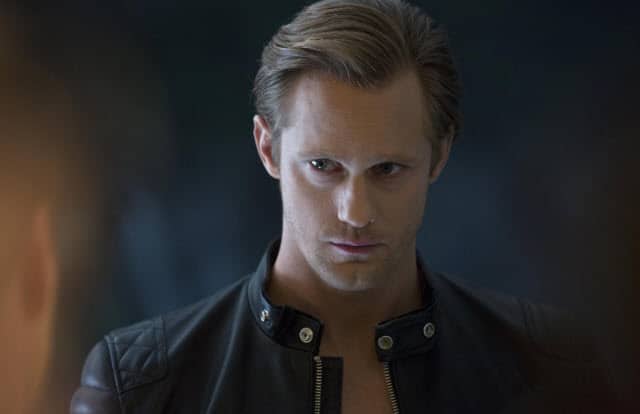 Can you believe there’s only one more True Blood episode left forever?  This show has had its ups and downs, but I will miss it nonetheless.

Penultimate episodes of any series are usually when you see most of the storylines begin to wrap up.  In this case, I have a few concerns going into the series finale next week.  For one, how in the world does it make any sense that Sarah Newlin is still alive and relevant, yet we may or may not have seen the last of Sam Merlotte?  Sam left for Chicago to be with Nicole and their yet-unborn baby.  I find that hard to believe that he could cut ties with Bon Temps so easily.

I don’t know how it’s going to happen yet, but I feel it in my bones that Bill will survive and live happily ever after with Sookie so I’m not too worried that he’s refusing to drink the cure for Hep V.  Once again tonight on his way over to Sookie’s house, he stopped in the cemetery and visited his family’s headstones.  I’m waiting for the flashbacks to his human life all season long to somehow pay off by miraculously curing him and/or turning him into a human.  They could even take all the baby hints and give Sookie and Bill a normal human family life together.

What really bugs me is Mr. Gus’ involvement this late in the game with Eric and Pam.  I couldn’t care less about him and the company behind TruBlood.  Obviously Eric wasn’t going to let Pam die just to lie about Sookie knowing about Sarah and the cure, but can’t Eric pull some vampire quick moves and take all these guys out once and for all?  It would be a shame for precious series finale time to go to Mr. Gus and his cronies as opposed to Arlene, Andy, Jason, Lafayette, etc.

Some characters are beginning to get their happy endings, so to speak.  Ginger’s dream of sleeping with Eric finally came true.  Then of course there was the whole Jessica and Hoyt reunion after Bridget saw that he chose Jess over her.  At the time, Hoyt didn’t remember Jess at all but he couldn’t deny the chemistry between them.  Once Jess filled him in on their complicated past, Hoyt punched Jason out.  What he didn’t realize was that he was driving him closer to Bridget.  She’s actually a good match for Jason, as she can see right through his warped vision of himself and constantly reassures him that he’s a good man.  Here’s to hoping we get a time jump in the finale so that we can see Jason and Bridget married with a daughter or two!

With a cure for Hep V on the horizon, it should only be a matter of time before Hep V positive humans can also be cured.  It hasn’t been addressed if the synthetic blood being produced will work on humans, but I sure hope so for Arlene’s sake.  Keith has been very understanding knowing that if he were to slip and drink her blood, it would kill him.  He seems like the second best guy for her to end up with, if only Terry never had to die.

Sookie was finally honest with herself regarding Alcide when she was talking to Arlene tonight, asking about how she’s been able to move on from losing Terry.  Arlene told her that the first step is to decide if you really want to move on, and of course Sookie never fully moved on from Bill.  That’s only going to make potentially losing him that much harder.

How do you think True Blood will end?  Will Bill survive to live happily ever after with Sookie?