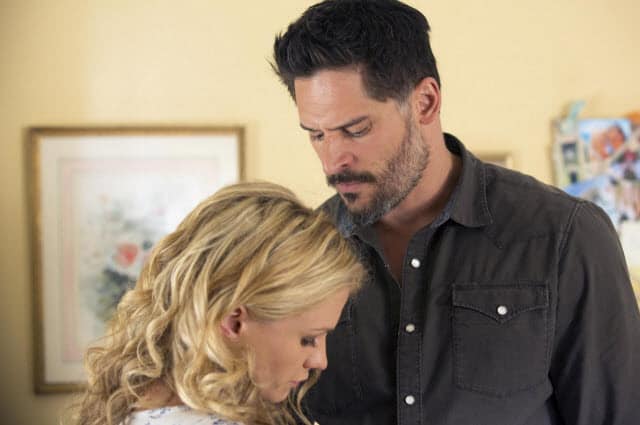 True Blood definitely made up for that lackluster season premiere last week with this week’s installment.  For one, the mystery of Eric’s disappearance is (kinda) solved.

Many fans will be delighted to see Eric back, especially with that risque love scene between him and Jason.  It seemed too strange from the start for it to be real so of course it was all a dream as Jason wakes up in church, of all places.  At least these blood bonds are one way to keep Eric fans happy while he’s M.I.A.

In the aftermath of Sookie exposing her telepathy ability in the church, people are still bad mouthing her to no end.  She doesn’t let that bother her so much because they have much bigger issues to worry about.  While Andy, Jason, and Sam deal with the looming threat of zombie vampires coming back, Sam exercises his mayoral power to suggest that everyone else keep busy and do something productive rather than live in constant fear.  He throws out the idea to clean up Bellefleur’s for when they get Arlene back safe and sound.

The gathering of a handful of humans who are trying to be helpful by cleaning up the mess from the attack at the bar turns out to backfire when the vigilante group convinces them to stand up for themselves.  Sam’s opponent in the mayoral race even exposes Sam’s true identity to the people to rile them up.  They end up tearing the bar apart and making wooden stakes out of anything they can get their hands on.

Adilyn was there to witness the uprising and thought she was one step ahead of the mob by warning Kenya at the police station of their intentions to loot the guns.  At first Kenya is on board with helping Adilyn and Wade move all the weapons before the angry crowd gets there, but she’s soon convinced to join the uprising.  She makes a move to arrest Adilyn, who doesn’t necessarily have a grasp on her fairy powers yet when she accidentally throws her across the room with a blast of power.  The mob of humans are already crazy enough and this just sets them off even more.  Honestly, they shouldn’t be too surprised even if they don’t know what exactly Adilyn is considering they just learned that their mayor is a shape shifting dog.  She’s not showing any unprovoked violent tendencies towards them like the Hep V vampires, but oh well.

Speaking of the rabid vampires, why hasn’t anyone thought to check Fangtasia?  That’s where Holly, Arlene, and Nicole are being held captive.  Fortunately for them, Arlene recognizes one of their captors, Betty, as a teacher from her kids’ school.  She and Holly butter up the vulnerable teacher-turned-vampire and convince her to set them free.  She buys them a short window of time when she’d be the only vampire awake to let them go, but first she craves some blood.  Arlene volunteers her own blood as a return favor for their freedom, and just as she starts feeding on her, she disintegrates.  Either this means Arlene is toxic to the Hep V vampires (which would easily get rid of all their captors) or this was just an inevitable end to the virus.  Back to square one!  They’ll have some splainin’ to do when the rest of the vampires wake up from their naps to find Betty’s gone.

Instead of checking nearby Shreveport, Sookie and company go to St. Alice following the lead of the strange dead girl Sookie found in the woods the night of the attack.  When they get to St. Alice, they find it’s a virtual ghost town.  No sign of life anywhere, just literal signs of their struggle following the attacks of the nomadic Hep V vampires.  The gigantic pit filled with bodies of the townspeople is a foreboding sign of what’s likely to happen to Bon Temps next now that they’ve begun their attacks.

Oddly enough this visit to St. Alice stirs up old feelings in Sookie when she reads the dead girl’s diary.  She wrote of a vampire whom she also met as a diner when she was a waitress.  Their love story sounded eerily similar to season 1, when Sookie first met Bill.  In the car ride home, Alcide can tell that something’s bothering Sookie when he tells her not to blame herself for falling in love with Bill, because that’s the most human feeling.  He offers to keep driving to get them far away from Bon Temps, but she can’t leave.  All signs are pointing to Bill and Sookie as endgame, don’t ya think?

Sure enough Lettie Mae isn’t letting up on her convictions that Tara needs her help.  She goes to Lafayette, begging him to get her some vampire blood, but he kicks his crazy auntie out.  She resorts to waking up Willa, who’s taken up residence at her house, and drinks some of her blood.  It would appear that Lettie Mae is just hooked on the V, but there is a chance she’s onto something with this theory.  We get to experience her vision of Tara this time, who is nailed to a cross with a snake draped across her.  She’s speaking nonsense, but for whatever reason Lettie Mae is fighting on to find out how she can save her.  It’ll be interesting to see how (or if) this storyline fits in with the rest of the characters fighting against the Hep V vampires.

We finally get an update on Pam’s search for Eric at the tail end of this episode.  She found him!  Unfortunately though, it looks like he’s infected if the veins on his chest are any indication.  So far we’ve yet to see any effective treatment or cure for the virus.  It would be a shame if Eric returns home only to die a painful death but hopefully a miracle cure is found ASAP.  With Pam on his side, I have no doubt that she’ll do anything in her power to save him.

A lot happened this week, and I can only hope it keeps getting better as we get closer to the series finale.  What did you think?