Things are getting really convolved in Bon Temp. Everything is blurring together into a eerie haze. Bill is caught between dream and reality, the future and the present. Sam appears to be in danger as vampire hostility could likely progress into shifter (and werewolf) hostility. Salvation is said to come when “light and dark collide,” and dimensional portals are etched in the cosmic ether.

Last week on True Blood, I jokingly scoffed at how transparent it was that this hoary weirdo was Warlow. It turns out that I–as well as Jason Stackhouse–failed this test. Jason takes gramps back to the Stackhouse residence to check out the portal in their bathroom. Afterwards, they gather in the kitchen for a wholesome family meal of spaghetti and gramps tells tales of his history with Warlow, who evidently also killed grandpa Stackhouse’s parents too.

He then teaches Sookie about how to actuate her ultimate fairy power. If husbanded correctly, Sookie can invoke a supernova, killing any vamp on contact. But here’s the catch: She can only use it once. Why? Because she’s only a Halfling. Oh right, that makes perfect sense.

Meanwhile, Eric travels incognito to have a meeting with the governor. He is hunched over in an undersized suit, discussing the merits of the whooping cranes, and saying things like, “No problemo.” The conversation starts getting increasingly ominous, which results in Eric attempting to glamour the governor. He fails because–in addition to new bullets that emit UV light–the state has developed contact lenses that are impervious to glamouring. They stupidly let Eric get away (“They can fly?“) and he glamours the governor’s daughter after she removes her contacts. 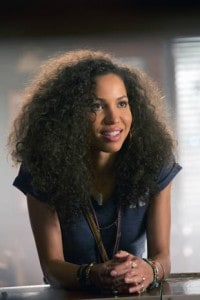 At Merlotte’s, Sookie bails on work because she ran into a fellow Halfling (Ben), and Sam is approached by a foxy black chick named Nicole who is the co-founder of The US Vampire Unity Society. She tells him that he should stop hiding as a shifter, that he should “come out” and join the vampires in solidarity. Sam rejects this notion thinking that it would get him killed, but Nicole argues that once they’re through with the vampires, he’ll be next anyway.

Bill Compton, still under the sway of Lilith, is trapped between worlds in a catatonic episode that is giving Jessica the wiggins. Lilith tells him that Bill must save them all. Bill then awakens in a start to see live footage of vampires being beaten on the television, the same visions that he saw (and experienced vicariously) earlier. “I can see the future,” he says amazed. He then sees a host of vampires being encamped in a white room. The dome retracts exposing sunlight. They are set ablaze.

What does it mean? How do we get there? You can study your Vampire Bible like Nora, but I don’t think you’ll get too far. Better just tune in next week to True Blood.

I’ve heard from a few critics that are down on True Blood this year. So far, I like it just fine. This show has always been absurd and diverting; they’ve pretty much given themselves carte blanche to write ludicrous plot lines as long as they maintain the show’s distinct tone. Is the one-time-only proviso for the fairy supernova a cheap construct to inject drama into the show? Of course it is. But honestly, who cares? I can tell you who don’t care: fans of True Blood.

You have to appreciate this show for what it is, all of it’s kitsch and eccentricities. For me, True Blood still delivers on those things.