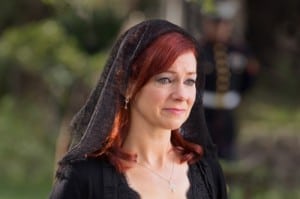 “I really don’t see what was the point of that,” says a woman (who I presume is Terry’s mother) after Big John sings a prolonged dirge. As I watch True Blood‘s “Life Matters,” I can’t help but feel the same. For the penultimate episode of a season, “Life Matters” is a remarkably poor showing. No character’s death should receive this kind of treatment, let alone an ancillary character.

Terry Bellefleur’s funeral completely hijacked True Blood this week in a way that felt not only excessive but plainly desiccated. I was actually surprised to see the shot of Arlene in black; I thought most of this was behind us already. Terry died three episodes back. We have subsequently spent a portion of the following two episodes dealing with the aftermath in what I thought was sufficient manner. Do we really still need to dwell on this? Are there any meaningful statements to be made about it?

Answer: No, there are not.

What we end up with is a series of flashbacks that add nothing to our understanding of Terry. OK, maybe that is unfair. I had no idea that Terry was such a fervent acolyte of Raging B***h IPA. But that’s about it, folks. It also gives the writers of True Blood a blatant opportunity to shoehorn the theme of this episode in: When Terry catches a catfish with Sam and Andy, he looks into the dying fish’s eyes and insists that they throw him back into the water. “Every life matters,” he says gravely.

Let’s quantify the best and worst speech, shall we? The best speech is easily Lafayette’s. Lafayette talks about the first time he met the seemingly catatonic Terry at Merlotte’s. Lafayette purportedly looked into his soul (not unlike the time George W. Bush looked into Vladimir Putin’s soul) and determined that Terry was a swell guy. He then explicated his voguish technique for cooking fries to the struggling Terry, in which you can either “sexy the dip” or “cha cha the dip.”

“And within 15 minutes, he had me swingin’ higher and faster than any of my friends at school. That’s my Terry story.”–Porsche

I don’t think I’ve ever seen someone bomb so resounding at a funeral in my life. In this story, Terry taught Porsche, who was then a child, how to swing. She recalled being very diffident about learning from others at the time. But there was something so pure and wholesome about Terry that allowed Porsche to open up. Nice try, Porsche, but people are praying that you stop talking. 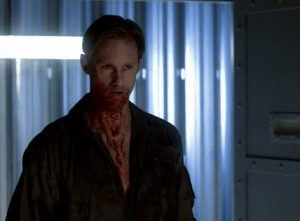 “You’re free. Go forth and kill the humans.”–Eric Northman

This is more like it! When Eric first bombards the vampire camp, he literally rips a man’s genitalia off. (Bill will later squash this guy’s skull in with his shoe.) All the while, he cavorts around merrily high on the blood of Warlow. He finds a young vampire whose maker has drunk the hepatitis v contaminated True Blood and Eric bluffly tells him that his maker is dying. (You know, it’s kind of like how Terry death is affecting his loved ones. Do you get it!?)

It’s Bill who actually saves the vampires in the white room. However, Eric elects to deprive Steve Newlin of Bill’s blood. In the best scene of “Life Matters,” Steve Newlin utters his final words as he looks up incandescently at his ex-wife: “I love you Jason Stackhouse!”

Our last brush with death is when Jason intercepts a fleeing Sarah Newlin. Jason decides to spare her life, cognizant that she ultimately deserves to die. But Jason has had enough death. So have I. Truth be told, even these sequences are tarnished and short-changed by the surfeit of time expended on Terry’s funeral. When Big John is singing, they actually intercut it with scenes from vampire camp!

With only one episode left in the season, you think that this would be the time we would move forward; it mostly didn’t. True Blood instead ineptly dwells on things that have already happened. They really phoned this one in.