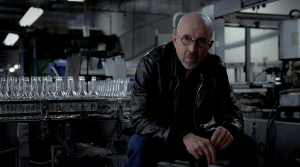 Have I convinced you all that this Willa as a vampire plot is an allegory for institutional homophobia yet? Well, in “Don’t You Feel Me,” Governor Burrell literally says, “Willa, let’s just pray we can fix you.” Subsequently, he invokes some kind of dubious scientific cure. I rest my case, folks.

Willa lashes out at her dad and demands equal treatment, but her dad is too entrenched in his ideology to be reasoned with. She tells her dad that he is just as responsible for her current circumstances as Eric is. Her side has been chosen: She is a full-fledged vampire.

And just like the responsibility borne by Governor Burrell for his daughter’s fate, many of our citizens of Bon Temp are suffering a similar turmoil. Jason Stackhouse feels responsible for Jessica’s encampment and has infiltrated the LAVTF, AKA the “f*** vampire police force.” He dazzles the recruit officer in his interview, speaking with great verve about wasting vampires.

“Part of our job is watching vampires do it.”–Sarah Newlin

Jason then encounters Sarah Newlin at LAVTF. Apparently, she can’t blow his cover, because he will, in turn, expose her as being a whore and–yeah I’m not really sure why that is a big deal either. She leads him to the vampire camp where they happen upon Jessica. Jessica is in the white room, forced to engage in copulation studies. She has resigned herself to her doom, feeling she deserves what is to come after murdering the Bellefleur fairies.

If that isn’t a death sentence I don’t know what is. Yet, it’s ironic that although Terry dies, you get the impression that he is one of the lucky ones, for at least he died in peace. He was able to let go of that thing from the past that haunts him. He was able to forget about Patrick. 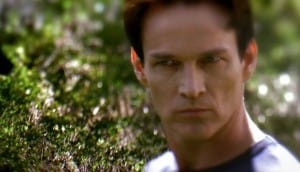 Bill Compton yet again seeks the wisdom of Lilith and gets nothing in return but riddles and accusations. Bill tells Lilith that this is her doing, for choosing “the wrong fairy.” Lilith turns it right back onto to him and tells him not to return to her again for advice.

Well, Bill has plans of his own. He has drunk the remaining blood of Warlow and is ready to brawl. He ominously approaches the governor in broad daylight. The governor’s men open fire on him, but Bill is indestructible. He nonchalantly walks up to the governor and decapitates him.

I’m ambivalent about this scene. For one, it was exhilarating to watch. Also, this was cleverly foreshadowed: When Jason is being interviewed for the LAVTF, he talks of “just cutting their head right off by the throat.”

However, I’m nervous about the implications of this. I could probably convince myself that Burrell–like many politicians–is synecdoche of the system, that he is just a faceless bureaucrat and that the real villain is the institution itself. But this was a very clumsy way of killing off a major character. After all of the exposition they parceled out over the first half of season 6, he is just killed by Bill like it was nothing. The whole thing was very facile. 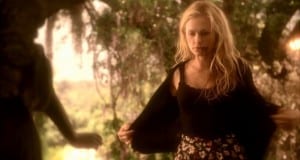 Speaking of shortcomings, the Sookie and Warlow content is getting increasingly clunky. Do you guys want to make any kind of attempt to explain how this fairy blast stuff works? Evidently, it can jettison a ghost out of someone’s body, teleport you to Fairyworld (Fairyland?), and seal a knot so that a vampire cannot break free. Oh yeah, and light emanates wildly when you orgasm in the middle of turning a fairy. Duh.

Here’s the conversation I imagine takes place in the writer’s room:

“Do you think it would work in that context?”

“I don’t know, but wouldn’t that be convenient?”

The title of this episode of True Blood asks, “Don’t You Feel Me?” which is a reference to the final scene between Warlow and Sookie. But as a whole, one of the main issues with this episode is that I feel it too much. It’s coming on a little strong here. Yeah, I get it: Responsibility is a drag.

And you guys know my feelings on Alcide and Sam Merlotte so I won’t belabor that. All I’ll say is that the bag of Funyuns was the most scintillating part of that scene. The upside is that the vampire camp (now with the “hepatitis v” tainted bottles of True Blood) is still great.

Also, I’m a sucker for Andy Bellefleur so let’s all give a warm welcome to Adilyn-Braelyn-Charlaine-Danika Bellefleur.