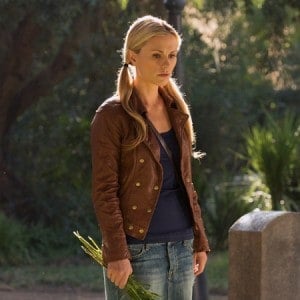 As human beings, do we innately remember things better than they really were? Do we unconsciously block out all of the painful memories–the additional pairs of underwear we had to pack for school in preparation for wedgies–and only remember the good times. Is Tom Keifer mistaken when he tells me, “Don’t know what you’ve got ‘til it’s gone”? Do we romance the past?

Or is it that life just gets progressively worse? Were they right when they told us that those were the best years of our lives? Could it be that in all of the cataclysm and turbulence of high school, we were our happiest?

In True Blood‘s Dead Meat, Sookie finds herself pondering these things. She stands at her parents grave, hurling epithets like a pissed off teenager. Just how swell were her parents anyhow? She knows that they chose to kill her over consigning her to Warlow. “I’d rather walk the earth as a corpse than spend another minute thinking about you,” she says indignantly.

Arlene feels similarly disillusioned as she is subjected to the drivel being promulgated by Terry’s family. Twenty-one guns at the funeral? Are you serious?  “Y’all are burying a lie,” she says before storming out of the funeral home. Moreover, she feels disconcerted about accepting the money for Terry’s death. She feels it makes her complicit in the act and wants Andy to bring justice unto Justin.

“My pack days are behind me”–Alcide

In the words of Sarah Newlin, thank you, Jesus! It appears that we heard the last time Alcide will ever blurt out “I am your pack-master!” Alcide’s sinister turn has been an utter failure for True Blood. It’s always felt like an inauthentic construct.

But now that all of Alcide’s inexplicable rage and megalomania has been reigned in–now that we don’t have to pretend that there are existential stakes underscoring his every action–I was able to enjoy him once again.

The circumstances surrounding Sam and Alcide is still utterly ridiculous, don’t get me wrong, but is has crossed over into stupidly entertaining territory. Consider this exchange regarding Nicole:

Alcide: “I caught her scent. It yours?”

Sam: “Pretty sure it is. Smelled like me to me.”

I re-watched this scene three times! I’m not even kidding: I thought it was great! Evidently Sam’s “scent” on Nicole connotes that he has impregnated her, and it has made Sam realize that he loves her. “Don’t get on that flight, Nicole! I want you to stay,” he says quixotically. Oh, Sam. You glorious buffoon.

“I don’t want to wait to start my eternity with you.”–Warlow

I have long suspected Warlow to be an avid viewer of Dawson’s Creek. After a while, eternity can get kind of monotonous, right? What else is a notorious fairy-vampire supposed to do with this surfeit of time? I wonder what his views are on the polarizing eighth season of 90210. 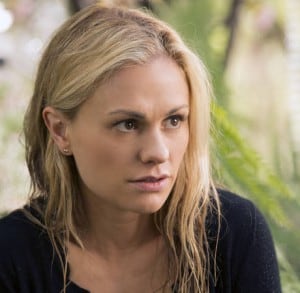 Warlow tells Sookie that he will help Bill if she agrees to be his princess for eternity*, a request that Bill concedes is “quite fair.” Sookie isn’t so receptive though. She just wants to help out her friends. But after being jilted by Sam, she realizes that this is her only destination. I thought she came to this conclusion two weeks ago when she referred to herself as a “danger-whore”–I don’t know. That Sookie can be such a scatterbrain sometimes.

*I should note I was pleased to see that Warlow (like myself) acknowledged how dubious Sookie’s change in behavior has been.

Jason is also being held for eternity by Mazurski. She ominously informs him that he shall always be her plaything. I’m sorry, is the vampire camp located in the Oswald State Correctional Facility? When did they start admitting vampiric women into gen pop? Is it a new gang?

The problem with these two threads is that they are establishing the theme too early into the program. And not only that, the respective scenes were within minutes from each and couched in the same vernacular. Ideally, these things are more suited toward the end of the show. Otherwise, events become too predictable. 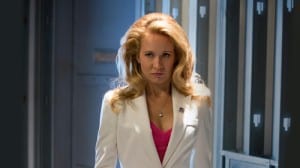 But there are no problems with Sarah Newlin. She is doing the lord’s work, and by the lord’s work I mean bludgeoning a reputable businesswoman to death with her own footwear. I have to question Ms. Suzuki’s thinking here. She is cognizant of the perils of walking on this perforated floor with heels, but she just muddles through it anyway. Did you think of maybe taking off the heels, Ms. Suzuki? Better to die looking fabulous, I guess.

Dead Meat is a satisfactory episode of True Blood. Some things genuinely work, some things are so bad that they work (Sam and Nicole and Alcide), and some things are looking rather haggard. At the end of Dead Meat, Bill’s vision of the white room is coming to fruition. Jessica, James, Steve, Pam, Tara, Willa, and Mazurski all await their doom. Eric has meanwhile infiltrated fairyland and fed on the majestic blood of Warlow.

Can he save them?