Home
Movies
Total Recall Ending: Was Quaid dreaming, or Was he actually a Secret Agent? 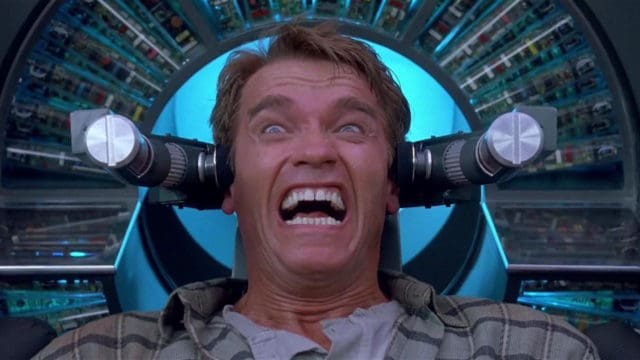 Opinions vary when it comes to how movies really end sometimes, but in this case Total Recall seems to indicate that Doug Quaid was in fact dreaming the entire time and is not really a secret agent. It’s kind of a heartbreaker really because you almost always pull for Arnold in his films since he’s just that awesome. But if you look through the facts it actually makes sense to think that he was stuck in a dream the entire time.

Here are a few facts you might want to look at.

The X-ray would have shown the tracking device.

Remember when he stuck that tool up his nose until he heard a crunching sound? Yeah, that thing.  Just looking at the thin shell that was covering it there’s no way to really think that the metal device in his head could have made it through an x-ray. The walkway that Quaid and so many others had to pass through would have absolutely lit up as soon as he tried to cross, and his cover, if it had been real, would have been blown.

Did you happen to note that while he was in the chair that Malina’s face just happened to show up as he was describing the type of woman he wanted? He picked her out entirely too easily. And while this could have been a hallucination the problem with that is the mere fact that if she were real there’s no chance that she’d be in the Rekall database, right? She’s a resistance fighter on Mars for crying out loud, she’d likely do her best to keep a lot more low-key than this. And the images of Mars, such as the alien artifacts and the fact that in his dream he saw blue sky. He’s in a place that can effectively mess with someone’s mind and allow them to see and experience whatever they want. While Rekall likely wouldn’t have any access to the top secret artifacts that are being kept under wraps it’s likely that they could still create convincing images in Quaid’s mind.

The reality of it.

Think now to the moment when the tech is attempting to get her boss on the line in order to tell him about Quaid’s sudden psychotic episode. He rushes in, Quaid’s going nuts, and has to be tranquilized. This is one of those supposed gray areas where you might be able to argue that he really was a secret agent all along. Why? Because when the boss is telling the tech that Quaid’s just acting out the scenario he paid for the tech tells him that she hasn’t implanted it yet. That kind of calls for a moment of reflection since by this time Quaid is already out and, well, dang. That still doesn’t mean much since it could be a part of the simulation. But then it doesn’t make a lot of sense for the techs to add themselves into the simulation without due cause.

There’s a gray area there for sure that holds out a little bit of doubt, but the overwhelming evidence says that Quaid was dreaming.