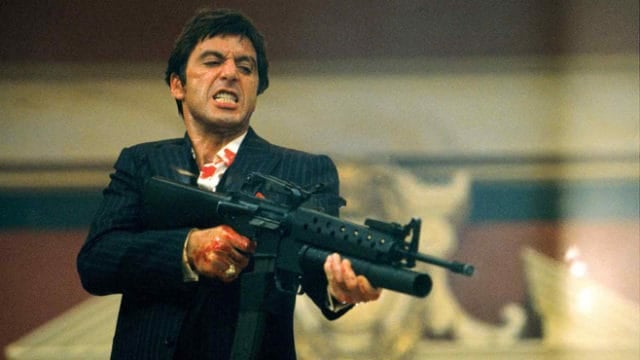 Whether they’re playing Latino or are actually of Hispanic or Mexican origin some actors simply know how to work the culture and the role they’re put into. It’s said that there aren’t a lot of big opportunities for the Latin culture within films, but lately they’ve been getting more and more exposure as time goes on. In truth it’s very nice to see as it offers a new perspective and a new style of filming that takes a different route from the expected roles and plot lines that people have come to expect.

These films are not all Latin in nature, but are among those that feature those that know how to work the culture and bring their own expertise to the film in which they star.

5. Satanico Pandemonium – From Dusk Till Dawn

So technically she’s a Latina, not a Latino, but bear with me. She’s just bad all around. Sexy, vicious, and insanely strong. Hayek’s character is almost like the queen bee of this particular nest of vampires, but unlike most vampire movies she’s not exactly as beautiful on the inside as she is on the out. Once she transforms she’s got all the charm of a rattlesnake and the desirability of an armadillo. Give her props though, the dance scene she performs before she goes full on berserk is just flat out hot, and if she’d lasted a little longer she probably would have been a heavy hitter throughout the rest of the film.

Not all enemies look to obliterate you in the end. Some are just cruel enough to leave you stranded with no way home and no hope that anyone might come for you for a long, long time. Khan is that cruel, and he’s that tough, largely because he and his people were abandoned when their world was virtually destroyed by a celestial disaster of epic proportions. Blaming Admiral James T. Kirk was only the beginning of his rage, he was fully ready to wage war on the entire federation if he had to.

Disturbed, psychotic, what’s the difference? It’s not entirely Hallam’s fault that he became an unstable killing machine. He was given the training, the opportunity, and the targets that his employers wanted killed, and in the end he started wishing he could turn the killing instinct off. But as his mentor had already pointed out, turning it off was the hardest part. Â Watching Hallam go one on one with his mentor however was perhaps one of the most meaningful and action-packed sequences in this film, despite being a little unrealistic in terms of environment and prep time.

It’s all ridiculous so just go with it. When the Benchwarmers are full on kicking Tim Meadows’ rear without much effort he finally calls in the ringer, Carlos, to even the odds. And right up until the ump seems to miss that Carlos is getting his drink on, Carlos does in fact start taking the Benchwarmers to school. Of course, once he gets about a dozen cold ones in him, and likely a few warm ones, his edge dulls noticeably and he’s no longer the threat he used to be. All’s fair in movie baseball right?

Every dog has his day. So yes, Al Pacino is not a Latino, but he’s playing one in the film. He puts in a performance that has stayed with people this long and was considered revolutionary in his time. His accent is a little hard to swallow and his tan is kind of less than perfect, but his attitude and swagger more than make up for anything else that might be said about his character. I mean really, how awesome is that he takes on a small army of gun-toting mercenaries by himself?

Not all Mexicans and those playing Mexicans or Latinos are typecast. They do get to stretch out into other roles and they are depicted as more than criminals. The roles listed above though simply fit each person to a tee at the time they were picked.