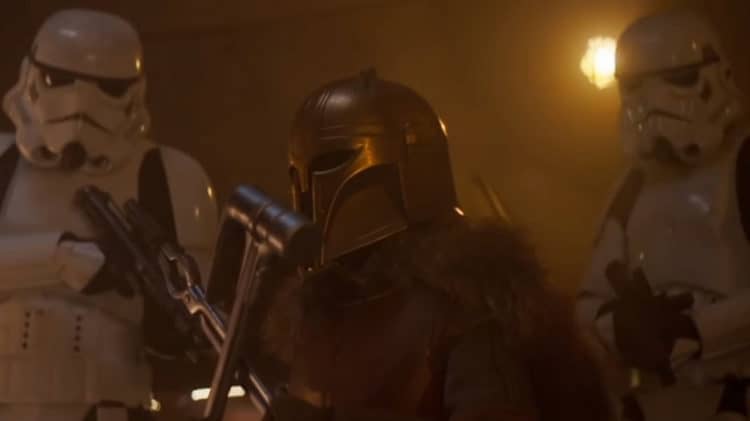 This is one of those moments when it’s pertinent to ask how many people that have watched The Mandalorian season one finale found the best fight scene out of the whole season to come down to the Armorer vs. the squad of stormtroopers that thought her to be helpless. If you’re raising your hand then it might be interesting to learn that it took somewhere between 400 and 500 takes to get this scene shot and as one can imagine, Lauren Mary Kim, the stuntwoman inside the armor, was feeling every take. The actress that plays and voices the Armorer, Emily Swallow, obviously didn’t have the training or endurance for this, which is a big reason why stunt people are brought in to start with. But taking on this many oners, sequences that are shot in one long scene rather than breaking it up into separate shots was bound to task anyone, no matter what kind of condition they’re in. Kim had to fight in full armor and helmet, which were likely lightened a bit, one might hope, so as to keep the fight as authentic as possible. Now that we’ve learned that other Mandalorians actually do remove their helmets from time to time, it would be a tactical disadvantage no doubt, even if it’s likely that the helmet might be an impediment.

There was no impediment as it can be seen in the episode since the Armorer took the squad down as though they were novices getting into a fight for the first time. The ease with which the Armorer dispatched the Imperial troops was a perfect way to leave the figure for the time since up until that point she might as well have been an authority without much force, since the other Mandalorian’s had deferred to her, and it’s easy to see why since she had such skill with her craft that they needed her in order to keep their armor in one piece and to work on their weapons when the need arose. But one thing that anyone should know about Mandalorians at this point is that they’re not bound to one way of life since a number of them possess a varied skill set, but nearly all of them are warriors. There’s a good reason why Mandalorians have been given such a fearsome reputation throughout the Star Wars galaxy, and it’s because even the lowest among them can fight better than most other individuals if they’re trained correctly. There are times when it’s been easy to wonder if Din is still learning the ins and outs of being a Mandalorian, but that argument is one that can come later since it’s obvious that since he was a boy he was raised to believe in their culture and become a part of it.

A lot of people are hoping that the Armorer will be making a return to the show at some point, especially since she’s proven to be one of the toughest of the bunch, but it’s hard to say whether or not we’ll see her again, though it does feel likely since keeping her around for one season wouldn’t make as much sense as bringing her back would. After the meeting with the other Mandalorians in the most recent chapter, it’s likely that Din will be feeling as if he needs answers, and the Armorer is one that can give him the answers he might need, even if they’re answers he doesn’t want. She has a way about her that’s kind of interesting to listen to, but it’s also likely that whatever he reports of the other Mandalorians might be taken with her same level of calm that would be kind of infuriating at that point.

As it stands though she’s still one of the more popular characters from the show, but when we’ll see her again something that people will likely be talking about for a little while, at least until they can find something else to occupy their time. If the Armorer is brought back though it could high advantageous to do so in a manner that would see her as a fighter again, meaning that Kim’s return would be very welcomed and that her fighting style would be anticipated by a lot of people. Thinking that she held off four stormtroopers with a hammer and a set of tongs is just pure awesome, and thinking what she could do with actual weaponry that’s designed for the specific purpose of killing would be even better. But if she did come back the hope is also that it would be either for another epic finale or for something equally awesome that would see her impressing the audience once again with the savage but refined movements that helped to prove that a single Mandalorian is worth several troops or more.