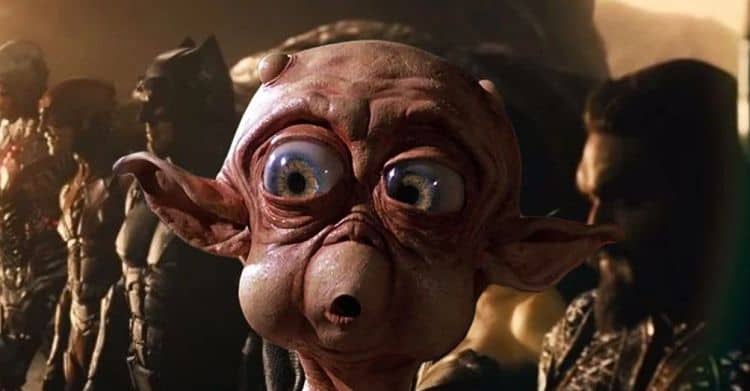 The Snyder Cut doesn’t really do Mac and Me any favors, does it? The movie still looks absolutely creepy and the bug-eyed aliens look even more disturbing than ET if that’s possible. But somehow there are people that still look at this movie and say that they don’t mind it that much, as it’s a nostalgic part of their childhood much as Garbage Pail Kids was for many others. It’s amazing when we look back and think about what we used to enjoy as far as entertainment went, only to look at it now and think ‘holy hell, that’s what I found amusing?’. The song in the background wasn’t exactly a big help either since the whole “Snyder Cut” routine that was done for the Justice League is another point that doesn’t work in the favor of this movie since as it’s still too easy to tee off and start making remarks about how Mac and Me is a blatant ripoff that didn’t go much of anywhere even with a sponsor like McDonald’s. It might have been quite a while ago, but if a movie gets the attention of a huge corporation such as McDonald’s and still can’t get that much of a push then it wasn’t that great, to begin with.

In all fairness, the idea wasn’t all that terrible, but the execution was simply terrible. A family of aliens that look like they’re in perpetual whistling mode was a strange design choice since not only did their lack of clothing make them appear kind of odd to those watching, but the huge eyes that rarely appeared to close and the overall look of them was something that was hard to get past. It’s usually not wise to judge a book by the cover so to speak, but looking at this movie it was fairly easy to think that it wasn’t going to be all that great. Unfortunately, judging it by appearance was about as spot-on as anyone could get since trying to make it all the way through the movie was something of an endurance trial for those that were able to plaster a grin on their faces and then just continue to bear it. Seriously, how many parents had to endure this when their kids decided that Mac and Me was THE movie that they had to watch? How many people would have gladly watched The Care Bears movie over and over instead of this? There might have been a large number of parents agreeing to watch a bunch of animated bears shoot happy beams out of their stomachs rather than watch another moment of this movie.

If you’re already thinking that such a thing would have been preferable then you’re not alone since as many people actually did get enjoyment out of this movie, there are a lot more wondering why since it’s lasted this long in pop culture as an oddity, something that is talked about since we still can’t figure out why it’s managed to get so much attention. But injecting anything to do with the Snyder cut into it is like asking people to divert their attention from this movie as they might begin, or continue to wonder, just how the Snyder Cut of the Justice League is really going to do when it comes around. Considering that it just came out, it won’t be long until the reviews start pouring in and people start following one opinion after another and eventually making up their own minds when it comes to what they thought. It’s kind of telling really to see that on a few of the promos, and just in mention, that Zack Snyder’s name is given more prominence than the actual Justice League. Is there something to that? Yes? No? A better question would be who cares since to be serious, the Snyder Cut is here at the insistence of so many fans that the Justice League could have been better, and while Snyder had to deal with a tragedy in the family, which is to be respected, his version of the JL is bound to be every bit as shadow-ridden as Whedon’s was, perhaps even more so.

But thinking that it’s going to be miles better because it’s literally an hour or so longer is like saying that a house of cards will be any more stable the higher it’s built. Maybe I’m wrong, maybe this will be what the Justice League really needed, but it doesn’t feel as though this is going to be the answer since the first movie won’t just go away as people want it to. It will become non-canon obviously, but it’s still going to be a reminder that DC has dropped the ball a couple of times in the last couple of decades, which is why the MCU has been on top for so long. Oh, and as far as Mac and Me, the hope is that a resurgence or a remake is not something people are willing to petition for.