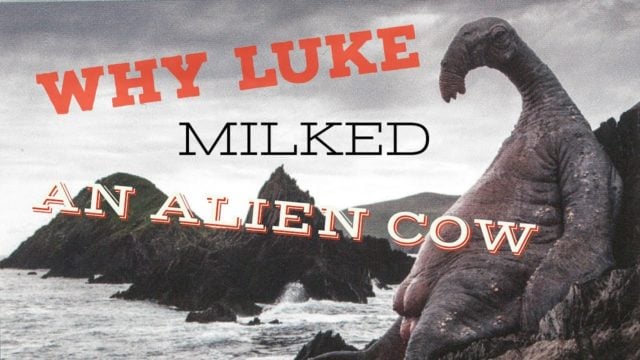 One of the most memorable scenes from The Last Jedi featured Luke approaching a creature called a thala-siren, milking it, and then drinking the resulting substance such that his beard becomes soaked in the stuff. For a lot of people who have never given much thought to how milk gets produced, it made for a somewhat uncomfortable scene, which seems to have been a sentiment shared by Rey. With that said, it is interesting to look at some of the effort that made the scene possible.

How Was the Milking Scene Made?

For starters, the people in charge had to photograph the location that would be used for the scene. This was important because the animatronic of the thala-siren had to fit into the rocks on the location, meaning that a recreation of those rocks had to be set up for the creation process. Once that had been completed, the people in charge got started on making the 18-foot tall animatronic, which needed to be able to accommodate not one but two puppeteers, with one operating the limbs and the other operating the udders. This made it possible for the animatronic to produce the green liquid when Mark Hamil and Daisy Ridley acted out the scene for The Last Jedi.

On an amusing note, while it seems probable that the color of the green milk had no special meaning to it, it is not as far-out as it seems. In short, milk looks white because its contents reflect all of the different wavelengths of visible light, which look white to us. This is important because different contents mean that different wavelengths of visible light are reflected, which is why different milk from different cows can have somewhat different colors. Some people might have noticed that skim milk can take on a bluish-green look, which can be attributed to this phenomenon. Furthermore, when milk undergoes an even more thorough process called ultrafiltration to remove all of its fats and proteins, the result is green in color because the vitamin B2 that is left behind reflects that particular wavelength of visible light. In other words, green milk isn’t impossible even in real life, though it should be mentioned that ultrafiltration doesn’t see much use outside of cheese production.

What Was the Milking Scene Supposed to Do?

Regardless, the milk scene was more than memorable enough to serve its purposes. For example, it humanized the character of Luke to some extent by making him someone who can do something so commonplace, thus making him both more and less than mere myth at the same time. Furthermore, it served to make the setting of Star Wars that much weirder, which is important when both sci-fi and fantasy movies are so reliant on a sense of wonder. Finally, it explains exactly how Luke has been surviving on Ahch-to the entire time, though presumably, his milk intake has been supplemented by not just fish but also the occasional porg. Summed up, while a lot of effort went into the animatronic, that effort seems to have more than paid off.