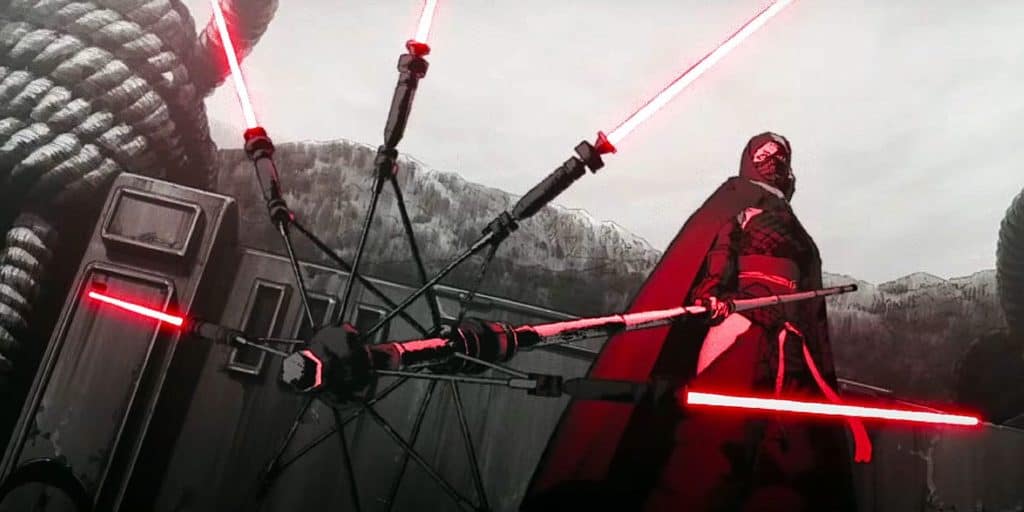 Imagine a whirling circle of red death whirling toward you as a device that uses multiple blades that are attached to a central hub that’s connected to a staff is being wielded by a Force-using individual that’s intent on not just cutting you down, but dicing you into several pieces. The interesting thing is that the entire staff portion that leads into the multi-armed parasol is powered by a regular lightsaber that is thrust into the bottom of the shaft and locked in. But the effect is insane and not to be discounted since watching it work in the Visions series on Disney+ is insanely impressive since in the hands of a skilled Sith it can block multiple blaster bolts, even when they’re coming at a rapid-fire rate. While it’s been seen in the movies that a lightsaber can be used to block blaster bolts and even light cannon bolts, blocking something like a repeating blaster set on full auto is definitely a feat that takes the lightsaber to a different level since this thing can be used in a very defensive manner to create a virtual wall of light between the user and those seeking to harm them.

But kind of like the lightsaber whip and double-bladed lightsaber it’s also a very specialized weapon that likely takes a lot more training to master and can be turned on its master just as easily as it’s used against others. The destructive capability of this weapon is immense though, and it’s fair to say that it’s something that one would use more effectively on the battlefield when horribly outnumbered and in need of an equalizer that could take down multiple opponents with one sweeping blow. In close combat, it would be nearly useless since unless someone was out to create as much havoc and destruction as possible, it would become a cumbersome weapon that wouldn’t make a lot of sense. But the way it’s used in the first episode of Visions is different since not only is it an impressive and intimidating weapon, but the Sith handling it also uses it as a means to glide down slowly to arrest her leap from the top of a troop carrier.

Once she went one on one however the Sith carrying this weapon took off the top portion and went blade to blade, perhaps out of honor or simply the desire to simplify things. For crowd control, this weapon is definitely effective and can get people thinking that she’s unstoppable, which is kind of true. Imagine a wave of Sith warriors armed with these weapons during one war or another, that would be a sight, but it would also be something tough to get through since unless the Sith were fighting the Jedi with these, or unless an army had a means of taking out such weapons, it would be intense. It’s fair to think that even this weapon couldn’t stop a heavy cannon blast, which means it would remain an infantry weapon just like a regular lightsaber, a much heavier version of the famed plasma blade since this many different shafts spinning as one could be a serious problem for many combatants. One could venture to say that even Yoda or Obi-Wan Kenobi might have a serious problem with this weapon since despite taking on superior opponents and, in Kenobi’s case, four blades at once, it’s easy to think that something that doesn’t stop spinning until the wielder makes it happen could be trouble.

The thing is that not a lot of warriors would be likely to lean toward training with this weapon since the desire to wield a single, double, or dual blades comes with certain advantages as well. This weapon is a juggernaut all on its own since it provides a seriously devastating attack and defense that can be easily manipulated and altered, at least from a front-facing view. A skilled user could possibly whirl it around to create a nearly impenetrable shell, but it’s likely that this would take a good deal of energy and would keep a person on the defensive without being able to really attack without surrendering part of that insane defense. Overall it’s a great weapon, but it’s also one that takes a lot of skill and a great deal of time to perfect since it is a little unconventional.

The thought of it is still pretty cool though since imagining a few Force-users who are skilled in the use of this weapon taking on an army of blaster-wielding, non-Force sensitive individuals gives a pretty good impression that the latter would be out of luck and that retreat would be a better option. In the history of Star Wars, there have been some truly impressive weapons created, and this is one of those that do have a good design and practical use, but much like a shield it does have its limits.